A Short History Of Market Crashes

My last few posts have been a coronavirus COVID-19 series, so I’m putting in the links here so as to refer back to them easily for now. These are the six posts so far.

Announcements to start with today, as apparently some people have been having trouble with the link to register for the special free public webinar that we have scheduled at theartofchart.net at 4PM EDT Sunday 29th March to look at COVID-19 and the Financial Markets, and in that webinar we will be considering COVID-19’s impact on the economy, systemic risk and impact on dealers, the Fed’s actions and credit risk, and reviewing potential trading opportunities. If you’d like to attend you can sign up for that here. If you are having any trouble finding a link to any webinar that we are doing you can also always check my twitter or my partner at theartofchart.net Stan Nabozny’s twitter to find the link.

On to the markets where I’ve been promising a post looking at the obvious target areas for this market decline to end. I’m doubtful that a low is close, though I am thinking that SPX might find some kind of floor to bump around for a few months while the COVID-19 pandemic plays out and we get a clearer picture of the economic impact that is likely to have. I’m going to be looking at a couple of previous well known market crashes to illustrate why I think that the usual fibonacci retracement targets are still valid for this move as well.

The first thing to say is that not all of this decline is about COVID-19. At least some of this is about the very high level of the market before this crisis, and the degree to which that high level was attributable to the low interest and high QE environment that the Fed have been delivering since 2008/9 with the aim of that being, in significant part, to inflate stock market and other asset valuations. To some extent the fast decline we have seen is just the air coming out of the market as it was pricked by an event that was large enough to push stock markets out of the upward path that the Fed has guiding them up for years. That said, there is a real crisis here, but at least some of this has just been a much delayed reversion to the mean: 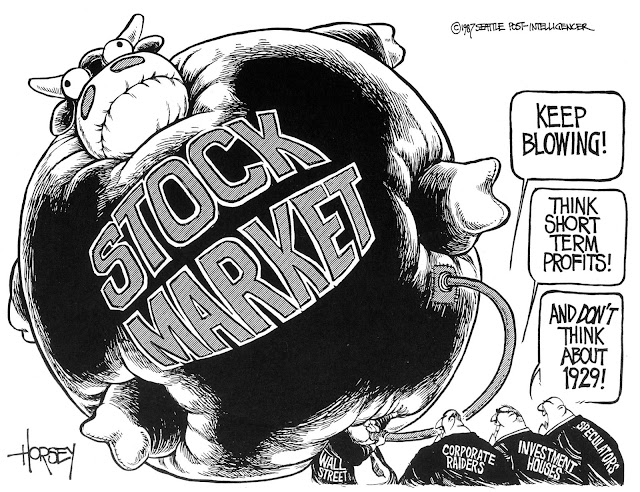 I’m going to look at a couple of famous past market crashes first as there is a widespread belief that these crashes are uncontrolled events that can go anywhere, whereas I would argue that they are generally just retracements that happened alarmingly quickly, while nonetheless heading to predictable targets that were obvious buying opportunities to the trained eye. In these times the smart money tends to do very well, while the it is the less well informed investor that tends to end up as a chalk outline on the pavement: 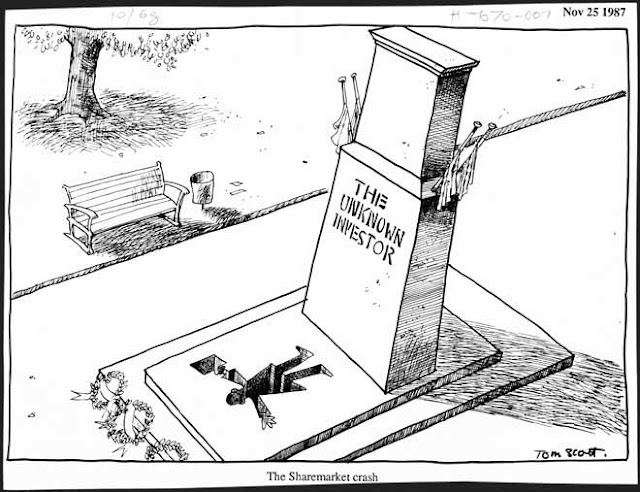 The first famous crash I’ll look at is the 1987 crash on SPX. This has something strongly in common with the current decline in that it happened very quickly. There had also been a strong bull run into the decline, up over 200% in 5 years. What I would note though is that, despite the shocking stories about the panic and wild decline, the decline was an almost perfect 50% retracement of that bull run, after which SPX bottomed out and started the next move up. My view is that the 1987 was just a retracement that happened alarmingly fast. 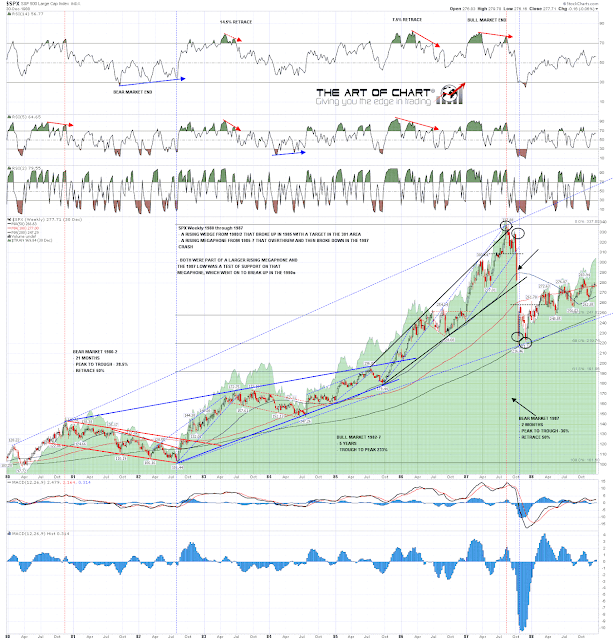 The second crash I’ll look at today is the 2007-9 decline. I don’t often use log scale charts, as unless there are clear trendlines on the log scale chart I assume that the normal chart should be used. A great example of where log scale is best however is for the 1974-2007 secular bull market. This formed a perfect rising channel and in 2007-9 a little under 61.8% of that move was retraced, with the three key lows in 1997, 2002 and 2009 forming a perfect support trendline before the new bull market began from the 2009 low.

Again the 2008-9 period was pretty wild, but the target was in the obvious range and makes perfect sense on the chart as the secular bear market retracement of this long secular bull market. 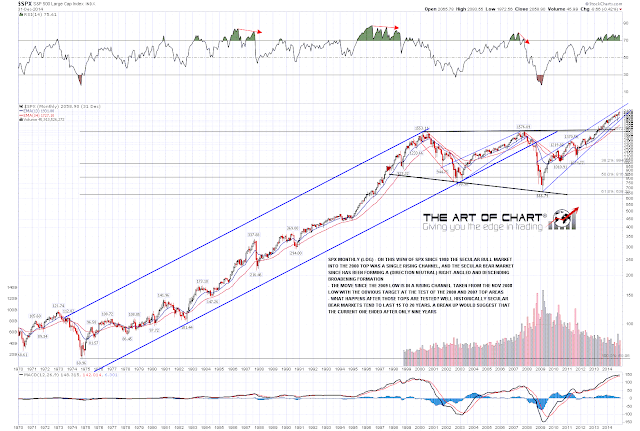 So what’s my point here? Well I have two points to make here. The first is that, however bad it may get in any bear market, ultimately the bulls always win, it’s just a matter of finding a low and then they slowly (1987) or quickly (2009) get back into the saddle and stay there for quite a while. The best trade that you can make in a bear market is to go heavily long near the low, and stay that way for a long time.

The second point is that having charted SPX in detail back to when data for it was first collected in the early 1920s, the only decline in that time that doesn’t like some kind of fibonacci retracement is the 1929 crash, where the real economy crashed with the markets due to misguided policies such as protectionism and allowing a general collapse of credit, triggering The Great Depression. Whatever happens here, the larger risk to the real economy seems less likely to be too little debt than too much. This crisis too should pass, and as long as governments aren’t complete fools, enough care should be taken to minimise the damage to the real economy during this crisis.

So what would be the obvious retracement targets this time?

The last three levels to watch, one of which will likely hold as this bear market low, are as follows:

The first level is just above 1800, the level that Goldman Sachs was talking about in the early stages of this crisis while the SPX was still grinding to higher highs, and was the low for three significant monthly candles, in April 2014 at 1814, in October 2014 at 1820, and February 2016 at 1812. That is a well established floor and might well hold again if reached.

The second target, on a break below 1800, would be the 61.8% retracement of the move up from the 2009 low in the 1700 area. If seen, this target really should hold, so the third target would just be a backstop target, though it is a very strong level that I would very much expect to hold in the unlikely event that it is reached, and that would be a backtest of broken resistance at the 2000 and 2007 highs at 1553 and 1576 respectively. That’s the blue shaded level on the chart below.

One of these last three targets will likely hold as this bear market low and, as I mentioned, once we see that low, the bulls should be back in the saddle for the next few years, so that will be a low to buy, and I’ll be watching for it carefully. 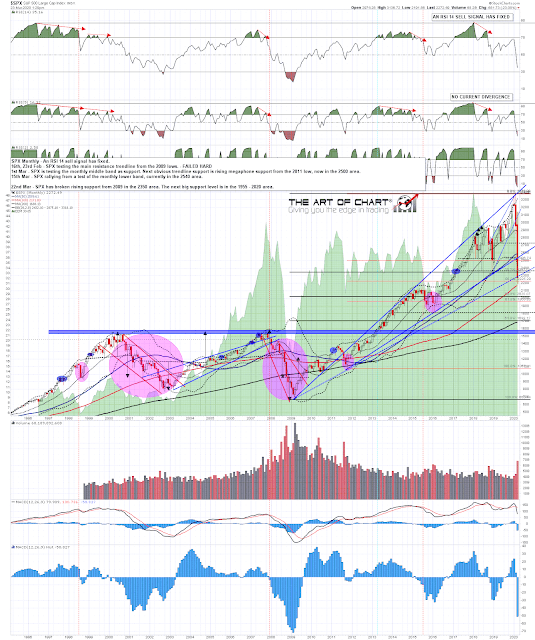 So what do we need to be paying attention to on the bigger picture as this crisis unfolds? Well there is a careful line to be walked here by governments. The level of coronavirus infections needs to be minimised if possible, and if that is not possible, then ongoing infections need to be managed (flattening the curve) at a level at which health systems are not overwhelmed, which is the point at which the death rates spikes from bad (maybe 2-3%) to really bad (possibly 10%+). At the same time the economic damage from social distancing and isolation has to be carefully managed to minimise the number of businesses that are closing down now temporarily, but fail to reopen later, having folded due to decreased turnover without sufficiently reduced costs.

I’m not a fan of the way the US and some other governments have responded to this crisis so far, as they were unaccountably very slow on the uptake that there was a problem at all, but it is the management of the economic impact here and now that could mean the difference between a modest economic contraction this year, and maybe next year, and a potential depression that could seriously damage economic prospects for years to come, possibly also forcing the collapse of the massive house of cards of worldwide debt that foolish politicians and irresponsible central bankers have allowed to build up over recent decades. Fingers crossed that they manage not to drop this particular ball, but they are aware of this danger and seem determined to avoid it. The odds are that the economic impact will be limited and temporary, though likely at a cost of considerably increased government debt and very possibly persistent inflation for years to come.

In the event that a larger economic contraction was to be triggered, then that could open lower targets on SPX. I’d note that the 1936-42 bear market delivered slightly over a 76.4% fibonacci retracement, and the 1929-32 bear market managed to deliver an absolute decline of 86%. It is possible to go lower than the targets I have given above in really extreme circumstances, and I am assuming that governments will act to prevent those circumstances. I’m expecting to be right about that but I could of course be wrong. We’ll see.