My last few posts have been a coronavirus COVID-19 series, so I’m putting in the links here so as to refer back to them easily for now. These are the ten posts so far. I’m planning to finish this series with a post on the likely economic impact of COVID-19 over the coming year, and a look at the interesting search for scapegoats that is now getting started, with the obvious targets being the very strange behaviour of both China and the WHO as this crisis was developing. That should conclude this series in the next week or two, though economies and markets will likely take quite a while longer to get back to anything that we might recognise as normal.

In my last post I was talking about false spring and the almost annual death of the early daffodils near my house as they came out prematurely before the last frosts of the winter. That’s been coming to mind this week as people have started to look forward to everything getting back to normal, and asking about V shaped recoveries in stock markets etc etc. It’s nice to hear people feeling more optimistic, but while people often talk about the power of positive thinking, it’s rare to hear much said about the power of wishful thinking, and at best, it’s going to take a while for things to recover.

There are many reasons for this. The first one is that this unprecedented global shutdown has triggered a highly likely global recession which the IMF have now assessed to be as bad or worse than the financial crisis recession of 2009, you can read about that here. That may well be leaning on the optimistic side depending on how the crisis plays out from here. Flattening the infection curve is working ok so far, but that’s really just a way of managing the impact on health systems to avoid overload. Previous comparable pandemics infected 40% to 50% of the world population before they were done, and the death rate from COVID-19 seems to be shaking down as being somewhere in the 1.5% to 5% area, depending on the estimate of those infected that show no symptoms (asymptomatic). If health systems get overloaded then that death rate goes up a lot. The virus is likely to go through the population in two or three waves and sooner or later most may have been infected. To make things worse, the normal immunity that a previous infection gives you may be absent here. There have been quite a number of cases worldwide of people recovering from COVID-19 and then being re-infected (and dying) later. That has the potential to make the progression of the virus through the world populations more uncertain and damaging.

How long can current quarantines and social isolations be maintained? Well not that long before severe and lasting economic damage is done. Apart from the damage to business and personal finances, the global supply chain of food is under threat, and I understand that at least part of the current collapse in the futures prices of cattle and pork is that a lot of processing plants have been closing down after virus outbreaks, and farmers can’t sell their stocks. I’ve read a lot in the past about the amazing ingenuity of the systems in place worldwide to grow and rear, process and deliver sufficient food to feed the huge number of humans on earth, and any serious disruption to those systems could mean famine for some, or indeed many. Some countries are already trying to limit food exports to anticipate this problem, which could cause major secondary disruption to the very globalized food supply chains.

There are a lot of smaller crises brewing of course. One that I’m watching with interest is the (next) gathering crisis on oil. There is currently a massive imbalance of about 35 million barrels per day between oil supply and demand. That is an oversupply relative to demand of about 50%. If you’re wondering why that is might I ask when you last filled up your car, or took a plane anywhere? OPEC has just agreed to cut supply by about 10 million barrels a day but it doesn’t take a stable genius to see that leaves an oversupply of about 25 million barrels per day. Global storage capacity is close to full and unless that imbalance reduces rapidly in the near future there will be (from Economics 101) a potentially very brutal discovery of a market clearing price at which those numbers are brought to balance. That could drive oil prices down a lot further than anything that the Saudis had in mind when they started a price war, possibly down to $15, maybe $10 or even possibly (and briefly) $5 per barrel. That would be a historic buying opportunity but might just crush an important sector of global stock markets. We’ll see how that develops over coming weeks but I’d suggest at least not being swing long on oil here.

This crisis isn’t likely to be ending here, it’s likely just getting started, and if SPX does manage to retest the bull market high, I’ll be thinking that might be the second high on a huge double top, but I strongly suspect that we won’t be seeing that retest this year. In the event that we do see it, that would be both a testament to the more impressive than expected power of the Fed, and a very strong sell.

Meanwhile, returning to the planet earth that we are living on, on to the markets. 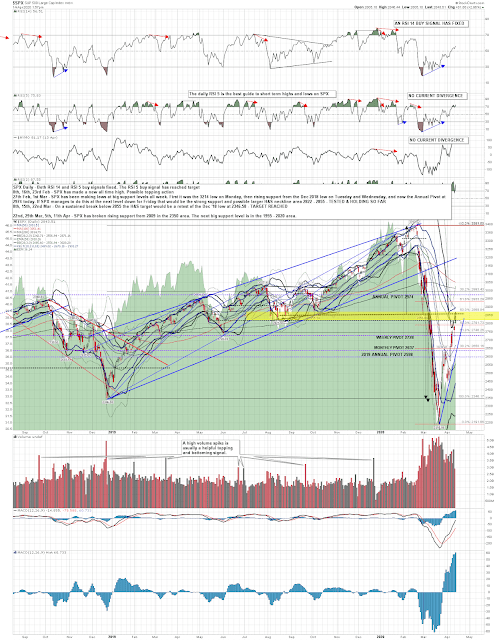 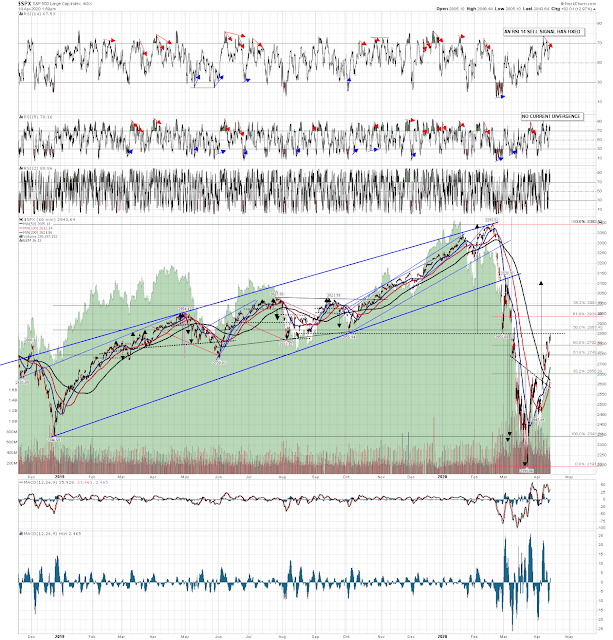 Is the rally high being made here? Well I like the negative divergence, with good quality RSI 14 sell signals brewing on the 15min & 5min charts, and one already fixed on the hourly chart. My problem here is that if this is a bear flag forming from the low, then there is currently no high quality flag pattern established on SPX. By way of example, here is a lovely example on the SPX 1min chart from today of a bull flag that formed after the morning high and then broke up into the higher high later on. These kinds of high quality flag form all the time on SPX on every timeframe.

So what are we looking at on SPX here? Nothing yet as high quality as that. This would normally be of high quality at the top of a rally, though not always. What are the obvious options to improve that pattern from here? Well SPX could go higher of course, and I’ve sketched in a couple of decent options if SPX does that. Another option is to break the current rally support and perhaps establish a channel support trendline parallel to a current resistance trendline with only two touches. If we are going to see that second kind of deeper retracement, there’s a decent setup here to do that directly from here. We’ll know soon if 2850 area resistance on SPX will hold for now. Even if it does this may not be the end of the rally but it might be the beginning of the end of this rally. 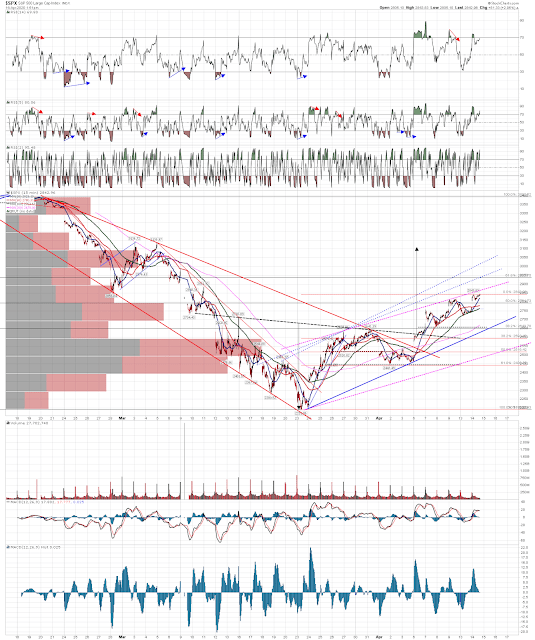 Is this just a rally on SPX and other indices? Very likely yes. I like to keep an open mind and dislike making definite statements about market direction. Forecasting market direction is about mathematical progressions rather than actually seeing into the future. The economic and market math clearly favor this being a rally. Anyone who can actually see into the future has me, and any other analyst, at a disadvantage, but the problem with prophets is that they are generally delusional or fools, or both. We’ll see. There’s only ever one way to find out for sure on market direction, and that is to wait and see. In the interim I have a great image from despair.com for those who believe that the while the crisis may not have been prevented by the ignorance and mindless optimism that defined policy towards COVID-19 until mid-March, that it may be enough to make the crisis go away now: 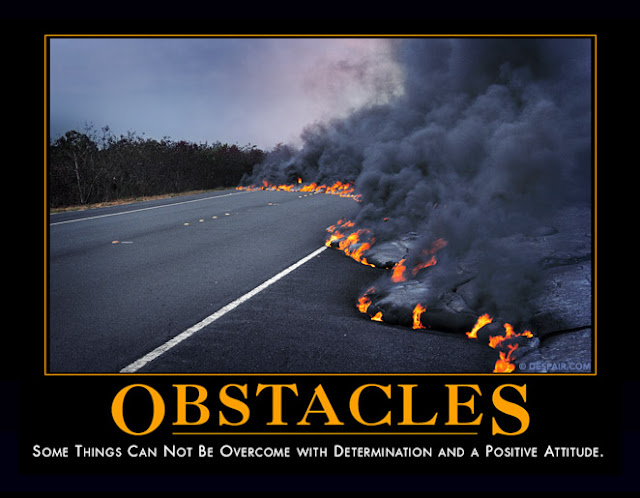 We did the introduction session for one of our regular Traders Boot Camp courses on Monday. This is a one month trading course taught by Stan and I teaching technical analysis and trading skills. This is mainly aimed at existing subscribers to help them use the forecasts we supply them with profitably but is also open to non-subscribers. As far as I am aware this is cheaper than any equivalent courses available and, I suspect, much more comprehensive and better value. It is not too late to join yet, as all sessions are recorded, so if you are at a loose end during this quarantine and would like to improve your trading skills then you can check that out on the course page here.