The Options Trading and Investing service provides perspective on high quality setups and option trading strategies. We carefully select these setups due to their quality and profit potential and we report back on results. In the weekend free webinar I review current portfolio performance and I also discuss techniques that I utilize to help reduce risk and, in some instances, lock in profits from previous trades. This week I discuss positions in GDX, AAPL, VXX, EEM and XRT.

Another good week for the option portfolio as it was up $400 over the previous week and up approx. $1500 over the past 2 weeks. It now has $4,899 in profits on closed positions. It is very common for the open positions to be at a loss in a longer term option portfolio because much of the profits accrue from the passage of time (Theta). As I close out positions it constantly drops the P/L back down on the ‘open’ positions. A good example of that is GDX where the open position shows a $486.50 loss but I have closed (realized) profits of $1,163 since May30. We are well positioned to make additional profits if the market indices move lower into late summer/early fall.

Below are 3 images from my tweets to the subscribers from this past week. If you are not a subscriber, consider the 30 day Free Trial. 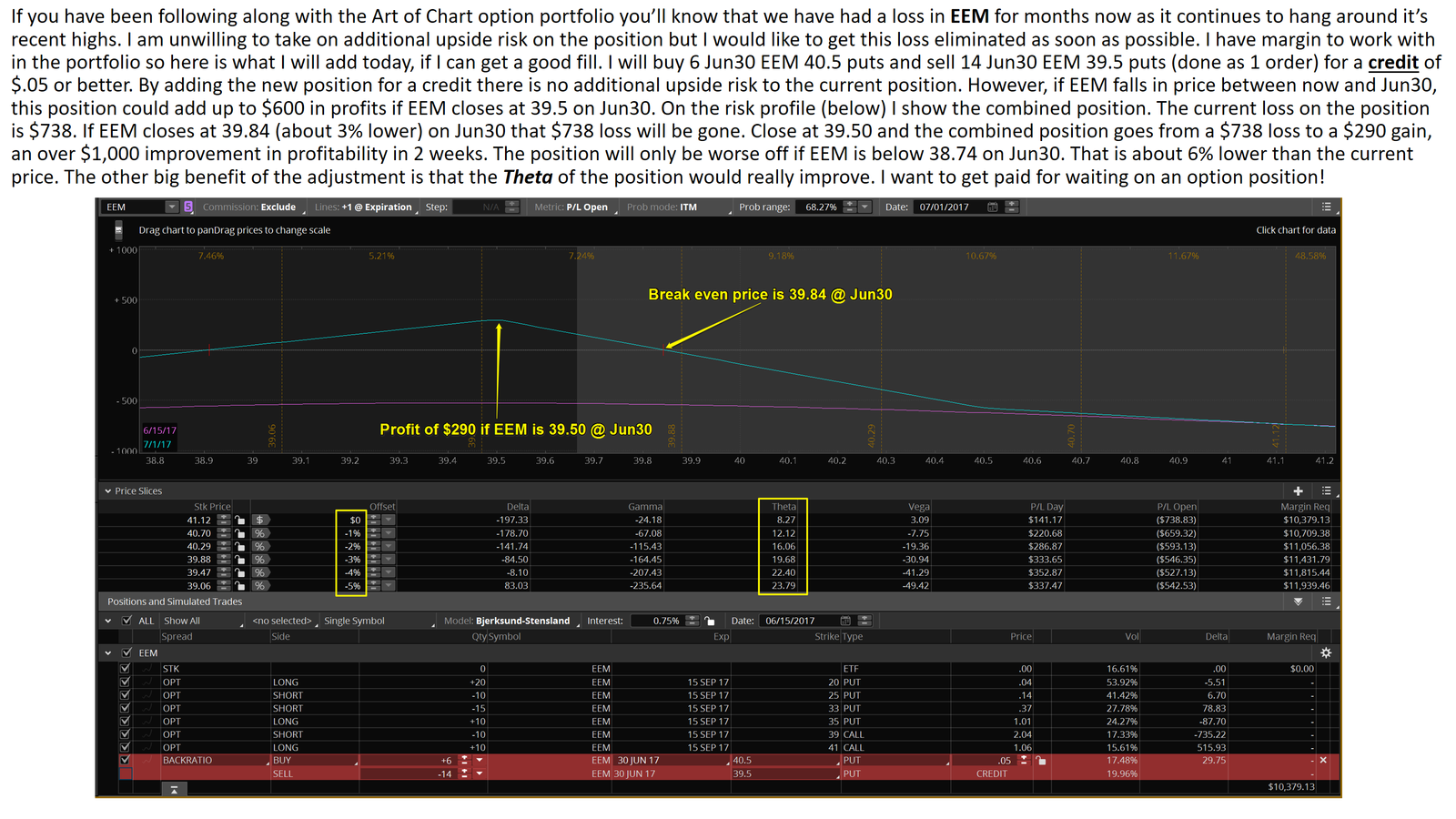 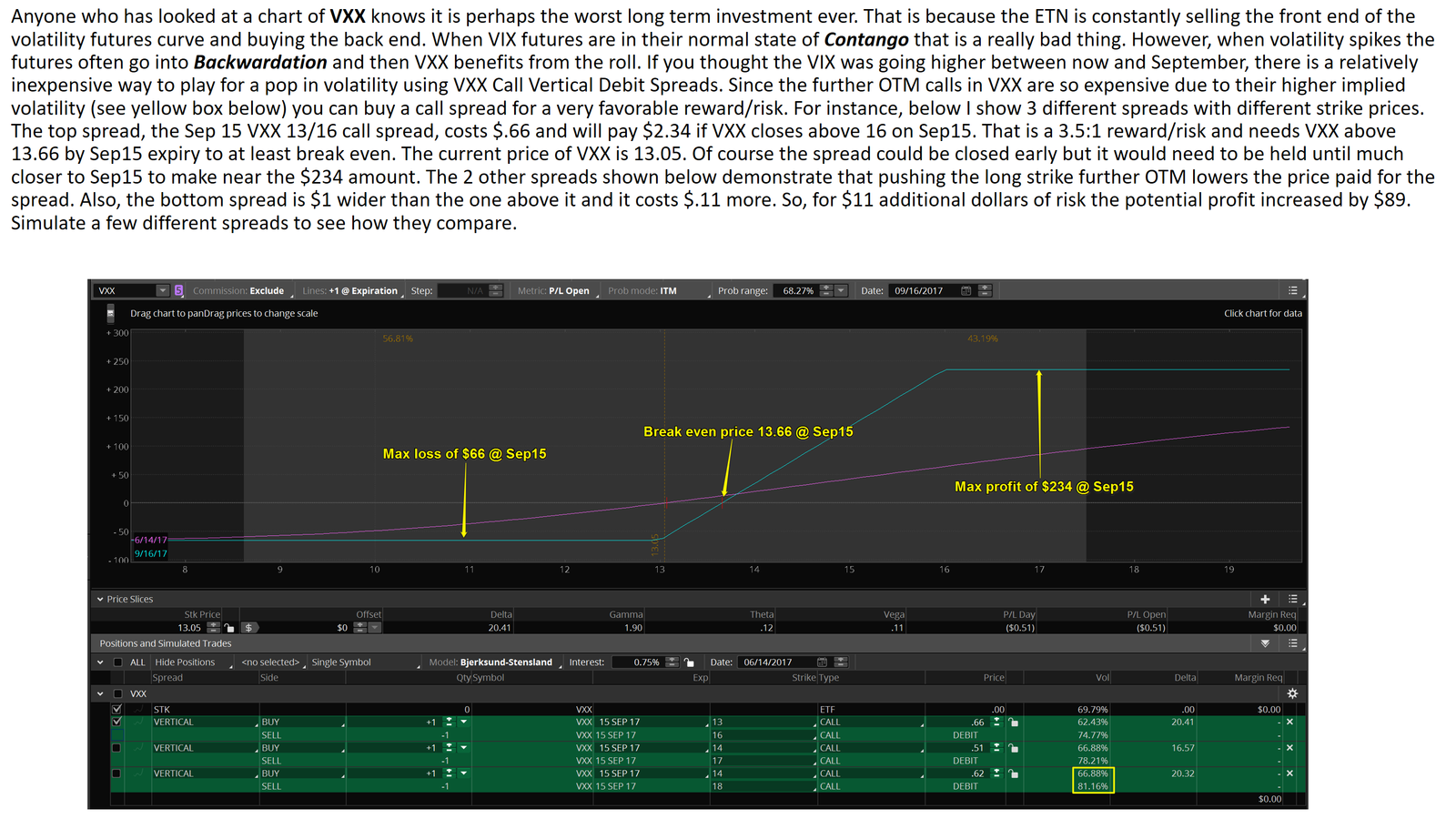 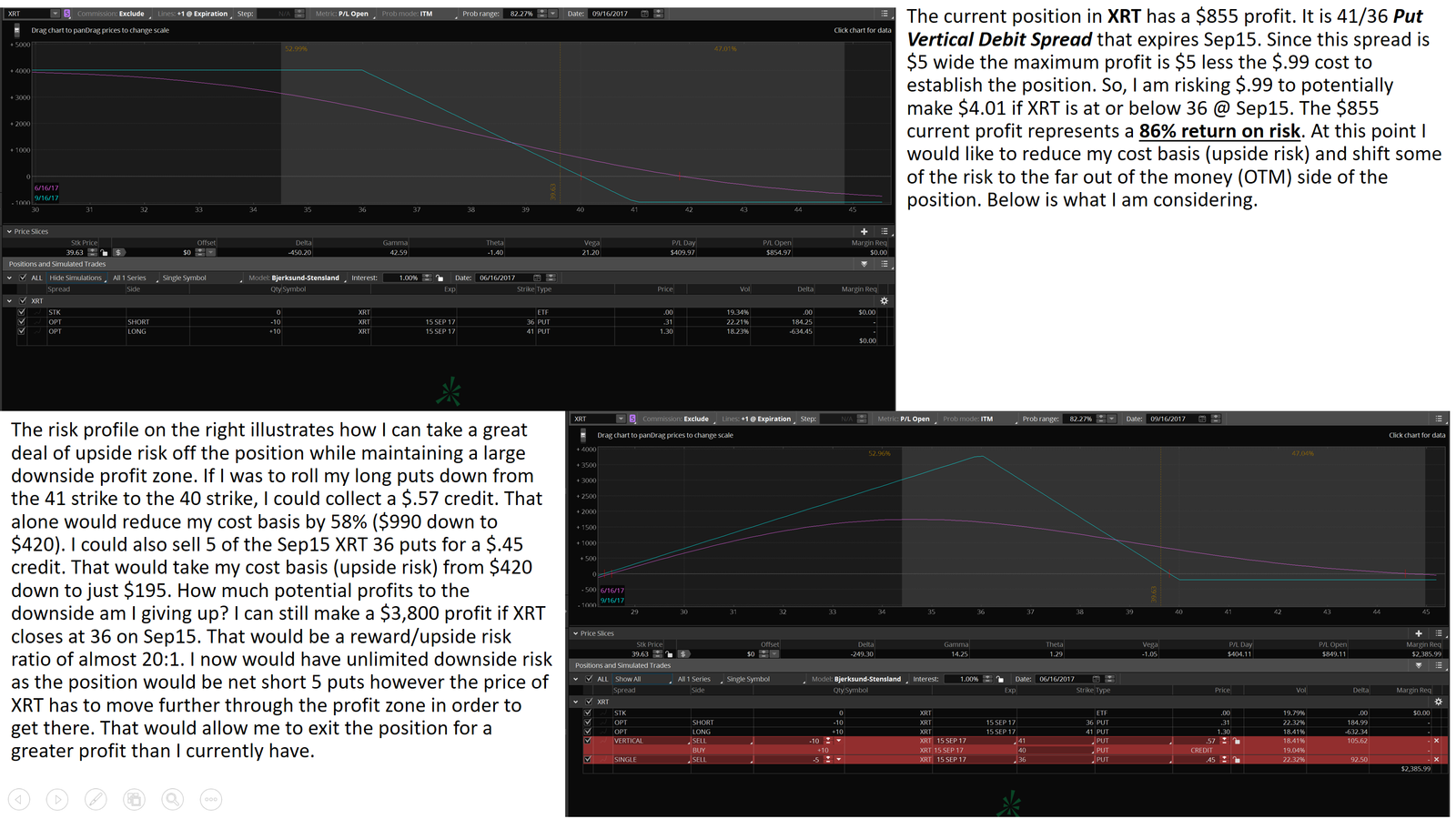 On 3/3/2017 the closing price on GDX was 22.20. This past Friday’s close was 22.06. The price of GDX is just 14 cents lower over that time period and yet the GDX option positions have contributed over $1,500 in realized profits and $1,000 in total profits to the portfolio. How does that happen? Stan has been spot-on in his short-term price and time projections and I have utilized option strategies that have been heavy on Theta so that the positions are profiting from time as much as price direction. I still own 2 assets in GDX, 3 Jan2018 GDX 25 strike calls and 2 Sep15 GDX 28 strike calls. The liabilities against those assets have been closed or have expired so I am now able to sell more calls against them to generate more premium from Theta. Rinse and repeat, over and over.

Below is the current position in AAPL. It is a long-term Stock Replacement Strategy that deserves a place in any option portfolio. Why do I call it a stock replacement strategy? What advantages does it have over simply buying the stock? As you can see below, the position is profitable as long as AAPL’s price is below $158.34. There is no risk to the downside. That feature is not available if you purchase the stock. This position doesn’t benefit from a big move higher like owning the stock does. That has been the big advantage to owning the stock over the past year. Will that continue? Stan doesn’t project that to continue in the Big Five Chart Service view of AAPL. If you are not a subscriber consider the 30 day free trial to see where he and Jack think AAPL is headed over the next year.

This was the question I asked on the June 11 webinar when the stock position was out performing the option position by $918.68:  If I was allowed to switch positions and take the stock position and the open profit but I had to hold whatever position I owned through Jan2018 expiry, would I make the switch? Not a chance! How about you?

Why longer-term option positions make up the majority of the Art of Chart’s option portfolio.

So what about the short-term traders? You can still be a short-term option trader and utilize longer-term option positions. Let’s look at this past week in AAPL with the Jan2018 position that I own in the portfolio. Let’s say I felt AAPL was going to have a bad week and I wanted to take advantage of that. What if I didn’t already own my current position and I initiated it just before the close on Friday, 6/9/2017. So the stock drops by 4.5% but the option position would have had a $600 profit in one week which is a 12% profit on $5,000 margin requirement. If I was a short-term trader I could have closed the position this past Friday and booked the $600 profit. Now, if I knew that AAPL was going lower this past week I could certainly have used a much more profitable short-term strategy instead but the problem is nobody knew what the price of AAPL was going to do last week. Stan likes to say that his good chart patterns play out about 70% of the time which is a huge advantage in trading however no one should take that to mean 100% certainty! I have been trading over 30 years and the current market is as ‘distorted’ as I ever remember. This relentless grind higher has only been seen a few times in recent decades. Art of Chart option trading is about maximizing the range of profitability that you can get with longer-term positions while incorporating Stan and Jack’s price and time targets to reduce the cost basis of entering the positions. This method will produce slower profits but fewer losses and, over time, more consistent profitability with lower trading costs.

I will have some new positions to add or adjust this week and I will notify subscribers through the Twitter feed.