The Options Trading and Investing service provides perspective on high quality setups and option trading strategies. We carefully select these setups due to their quality and profit potential and we report back on results. In the weekend free webinar I review current portfolio performance and I also discuss techniques that I utilize to help reduce risk and, in some instances, lock in profits from previous trades. This week I discuss a potential adjustment to the TLT position and how to add a hedge to an existing position to adjust Deltas prior to an earnings announcement. Finally, I update the Apple stock vs. Apple option ‘competition’ to see which strategy is performing best.

Below is the breakdown of all open and recently closed option positions.

This is the slide from last week’s webinar where I established a bearish position in TLT:

Below is the new position in TLT. It is short 122 Deltas. Based solely on probabilities, this position has a 50/50 chance of being profitable at expiration. That is because the current price of TLT also happens to be the break even price of the position. The worst possible outcome is a $859 loss. The best outcome is a $1,641 profit which is almost a 200% reward/risk ratio. Probabilities aside, the position is based on Stan’s projection of a move lower into the Fall.

Stan mentioned there might be some more movement to the upside this past week prior to the later move down. That was the primary count but there is an alt count where TLT just continues higher. There was upside price movement that went beyond where I wanted to hold short Deltas in the October position so I made an adjustment to pivot to long Deltas.

After closing the short calls for a loss, the remaining open position shows a $210 gain. The position is now long 227 Deltas meaning TLT needs to continue higher in order to make a profit. This is an October position and it fits a longer term bullish perspective on TLT. That is my bias for now which is why I closed out the October short calls. Was the time right to make that change? The contrary side of the equation based on my understanding of Jack’s Friday /ZB (bond futures) chart projection is that TLT is due for at least a 1% – 1.5% pullback here in the next week or so. So how do I protect the profits of the longer term bullish position on a short term pullback? I would like to do even better than that. I would like to limit the draw down in or actually increase the profits this coming week as well as increase my potential profit on a continued upside move after this week.

At the end of next week, the risk profile below shows the projected profit/loss for the week’s price activity as well as the what the position’s open profit/loss will be after the close on Friday. If TLT finishes the week unchanged the position will have a small profit. The anticipated move of approximately 1% lower will see profits increase by $164. And what if there isn’t a pullback in price? The position will give back some, but not nearly all of it’s profits. The only real draw down happens if TLT were to fall by more than 1.5% next week. If I thought that was most likely I would simply adjust this position by moving by strikes down by $.50. That would result in selling the 124 strike instead of the 124.50. I want to be short the strike that corresponds with where I think the price of TLT will be at the end of the week.

There is another way to look at the position post 7/28 expiry. Instead of closing the adjustment position completely, if TLT is at or below 124.50 at the close on 7/28, the short calls expire worthless leaving the position with the 3 long Sep15 TLT 125 calls. How much will I have paid to own those calls? Nothing, well, better than nothing. I will have received a credit of $.90 to own them. It’s nice when you get paid to own an asset. Below I have simulated what the position will look like after 7/28 if that scenario occurs. The position would be long over 300 Deltas and a 2% move higher in TLT would give the position a $1,500+ profit as of Sep15.

Is this position now out of sync with Stan and Jack’s longer term call on TLT? Possibly, but not necessarily. By considering the adjustment I’ve put myself in a position to potentially buy another week’s time to see if their price projections change to the alt count. TLT seems to be at an inflection point this week and I reserve the right to change my directional bias. For this coming week I think I will be synced up with projections. I’ll let you know next week how this position has evolved.

I tweeted this to Art of Chart subscribers from 7/18: 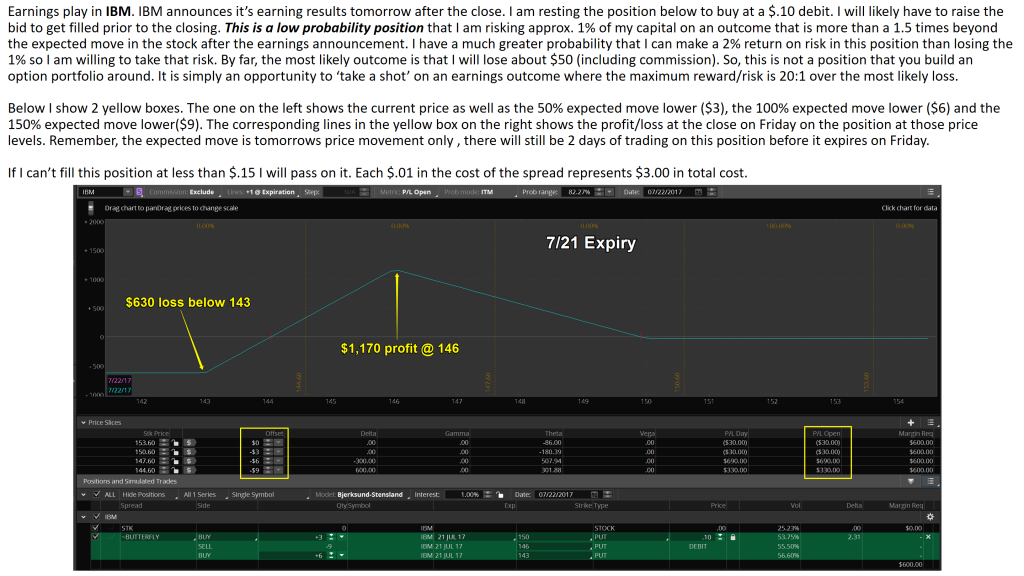 I  did not get filled on the position as I was too cheap to pay the $.30 debit needed to get filled. However, this is how the position evolved without me profiting from it.
This is after the earnings announcement. At this point, the position would have had a ($483/$690) 70% profit in one day.

Below is the current position in AAPL. It is a long-term Stock Replacement Strategy that deserves a place in any of my option portfolios. Why do I call it a stock replacement strategy? What advantages does it have over simply buying the stock? As you can see below, the position is profitable as long as AAPL’s price is below $158.34. There is no risk to the downside. That is not a benefit of owning the stock. This position doesn’t benefit from a large, immediate move higher like owning the stock does. That has been the big advantage to owning the stock over the past year. Will that continue? Stan doesn’t project that to continue in the Big Five Chart Service view of AAPL. If you are not a subscriber consider the 30 day free trial to see where he and Jack think AAPL (as well as NFLX, AMZN, FB, TSLA) is headed over the next year.

If I decided to hedge the position to minimize current upside risk I could do so any number of ways. One way is to simply sell a $5 wide, nearest out-of-the money (OTM) Put Vertical Credit Spread (aka Bull Put Spread). Selling a 10-lot would take the Deltas on the position from -79.72 to +2.65. The position would then be essentially neutral at the current price of Apple’s stock. Notice the adjustment didn’t cost the position any of it’s Theta. In fact, it increased the Theta by 40%! How much Theta would accrue over the next 187 days? The current loss on the position is $49.83. If AAPL is at it’s current price @ Jan2018 expiry, the position will have a $5,205 profit. That means the position will accrue $5,254.83 in Theta over the next 187 days. That is an average of $28/day in Theta. In percentage terms, that is almost 4%/week. In comparison, the stock pays a dividend of 1.69%/year. I wouldn’t anticipate holding the hedge all the way through expiry as Stan is expecting a large move lower in AAPL but I can add the hedge and then take it off at any time I want to increase my short Deltas again. This is something I will consider adding early this coming week. This adjustment can also be used to hedge an earnings announcement. BTW, the hedge would not add to the margin required.

On June 11th I began keeping an updated comparison of how this strategy has performed in comparison with owning the stock so we can all see how it is working. The option position I established used up $5,000 of margin. For that amount of margin, I could have instead bought 72 shares of AAPL stock at $139.79 on 3/1/2017. On 7/23/2017, AAPL closed at $150.27/share. If I had bought the stock my profit would be $754.56. The option position currently has loss of $164. That means that the option position has under-performed the stock purchase by $918.56.

Why longer-term positions make up the majority of the Art of Chart’s option portfolio.