Just 4 days after establishing a TWTR  position I had the opportunity to eliminate all cost in the position while still maintaining a potential maximum profit of $6,000. How can a ZERO dollar cost position have a potential $6,000 profit? Keep reading below and you’ll see the answer to that question.

First, I have to admit that the title of this blog is a little misleading. There is a difference between no cost and no risk. No cost refers to the elimination of the original cost/risk of the position. However, as time passes and a zero-cost position (hopefully) builds a profit then the position’s risk is the difference between the open profit and the $0 cost.

Below is the risk profile for the TWTR position reflecting the original position plus the 4 adjustments that I made this week. The position began with a $1,960 cost to buy a 20-lot of the Apr17 TWTR 24/20 Put Vertical Debit spreads. That initial position was bought in 2 separate transactions on 3/30 and 3/31. As soon as the position was established I was already planning on reducing cost on both the front and back end of the Vertical spread.

After I had finished establishing the original position on 3/30, I told the Vega Options private twitter followers on a 4/1 tweet that the bearish chart pattern that caused me to initiate a bearish option position was still intact and my open orders to reduce risk were resting below the current price. 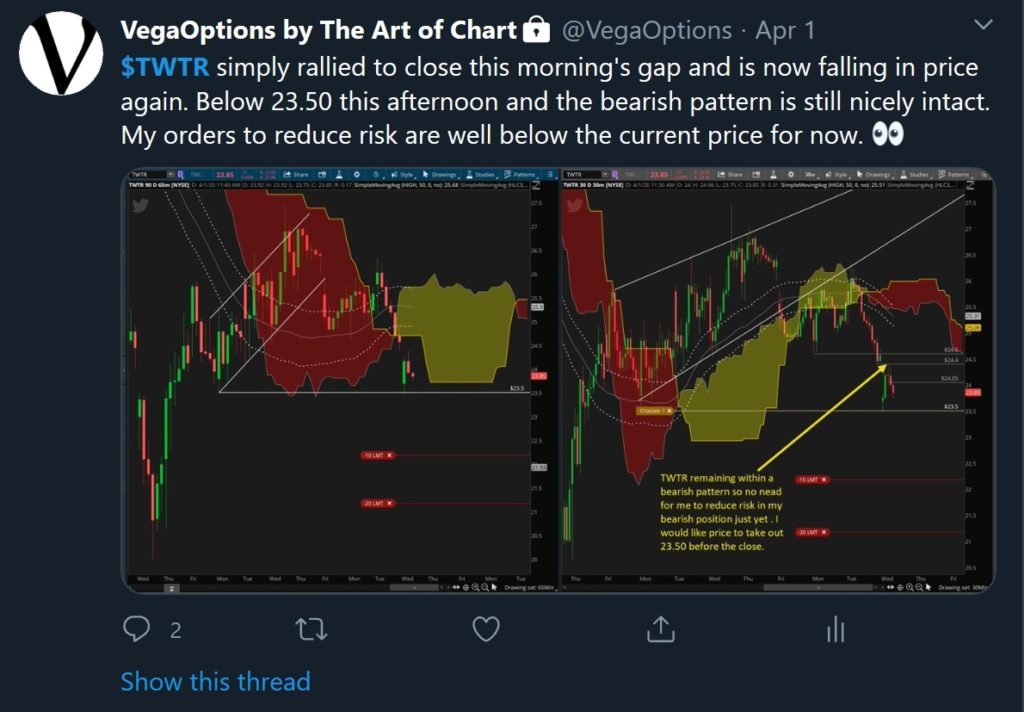 Later that afternoon I tweeted:

On 4/2 I was still waiting to reduce the position’s cost but price was taking it’s sweet time moving lower. However, the position had plenty of time duration so, as long as the bearish pattern continued to play out, there was no need for me to rush in getting a fill. 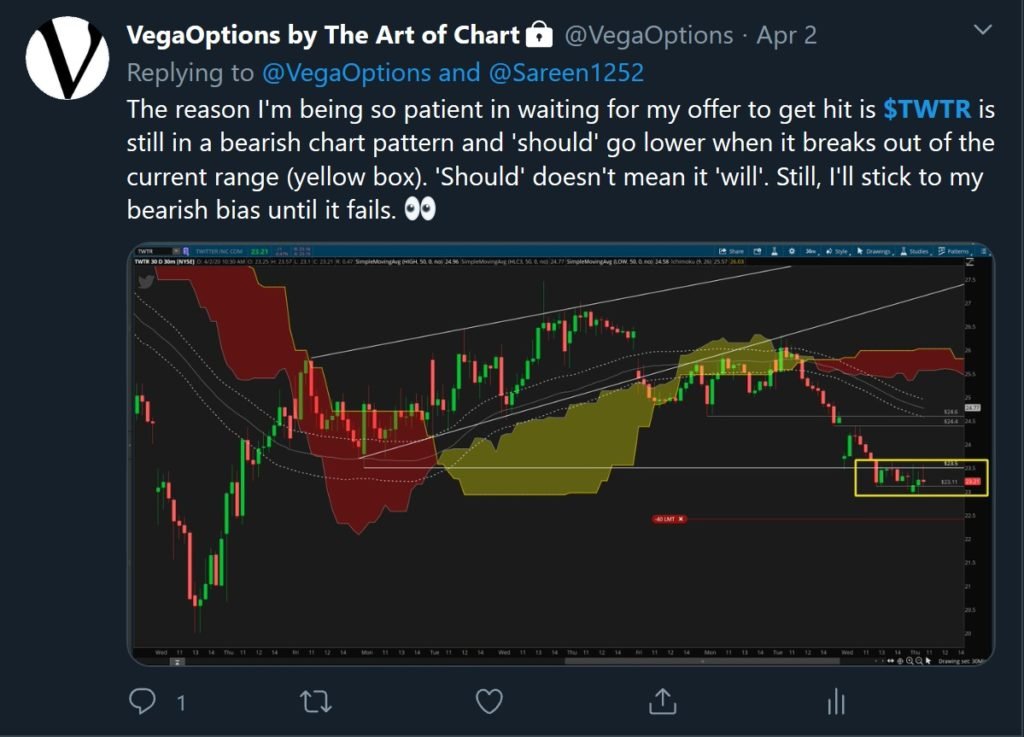 On the afternoon of 4/2 I tweeted that price was nearing support and could bounce higher so I wanted to reduce cost to protect the profits the position had already accrued. I mentioned the support zone was 22.30-22.38 and the low price that afternoon was actually 22.36. 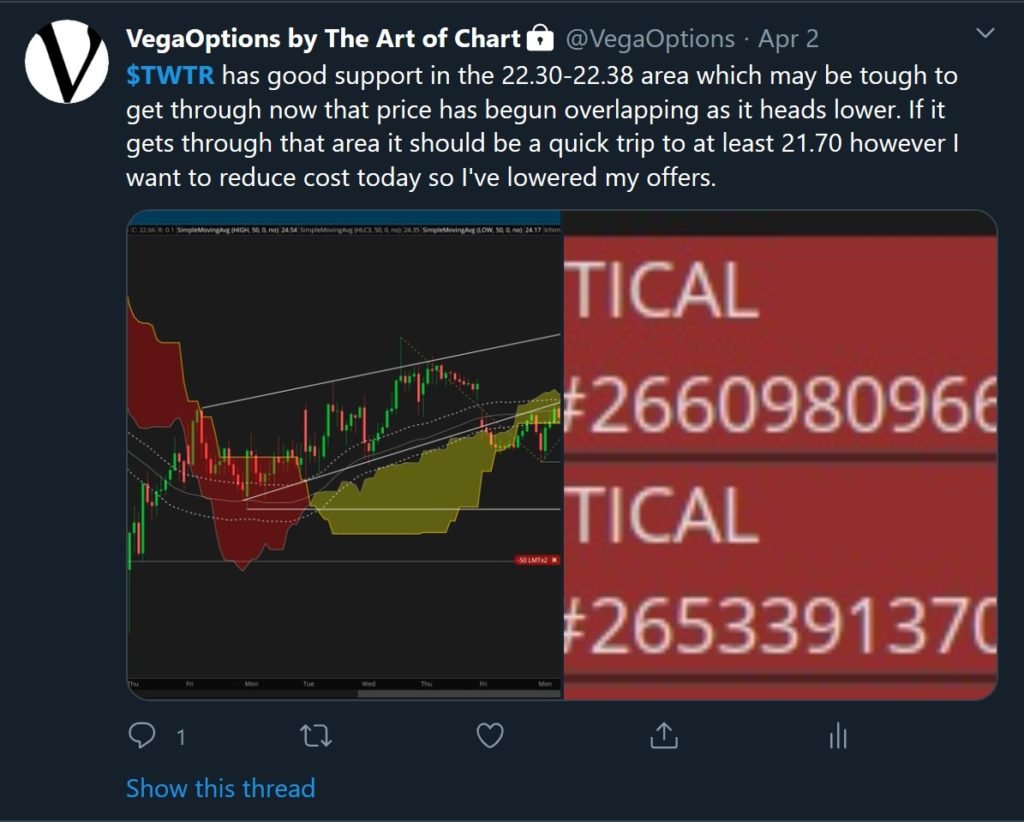 Before the close on 4/2 I mentioned a couple of likely alternative paths for price to follow. I mentioned that there could be another good opportunity to add to a bearish position if price bounced up into the wave 4 area around 24.15. 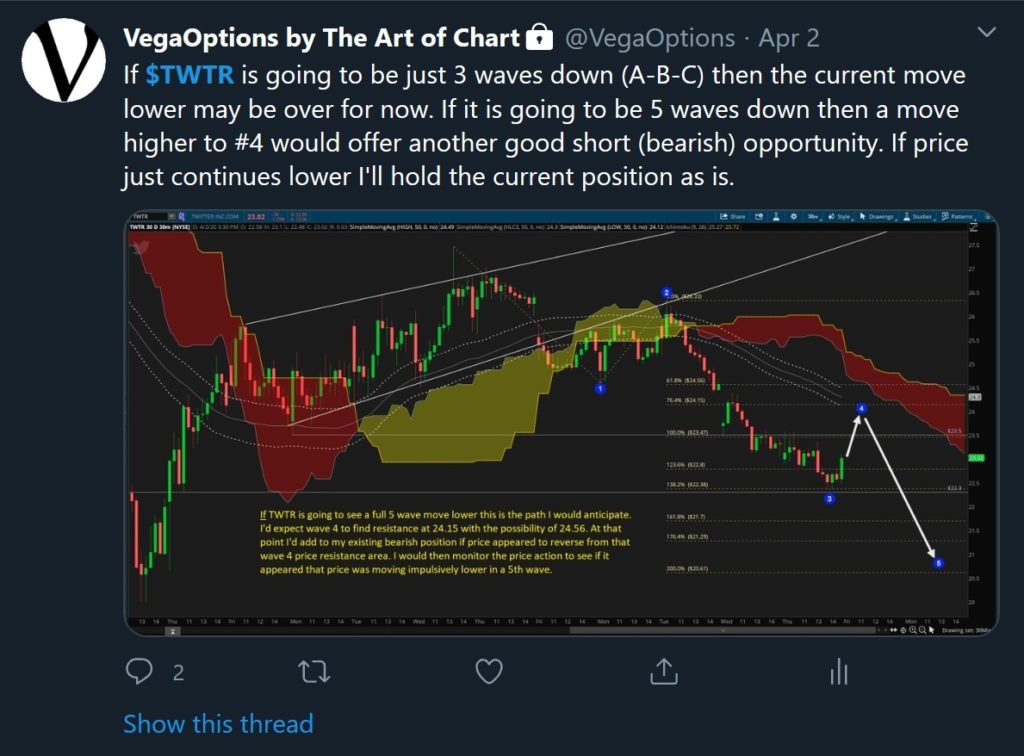 On the morning of 4/3 TWTR gapped up over 4% and reached a high of 24.32 before selling off immediately after the open. I was able to add to my bearish position which was transaction #5 in the above list.

Now I am left with the risk profile that you saw at the very beginning of this blog post. I had the opportunity to reduce all of the cost from the position before the close on Friday yet I chose not to. The chart pattern still looks like it has unfinished business to the downside and I would like the opportunity to not just eliminate the cost but to lock in a nice profit with my next adjustment. My current open profit of $1,221 is a 117% return on the position’s current cost of $1,040 so I’m doing just fine in the meantime. No doubt there will be more opportunities to come this week.

That is all I have for you now. If you are not a subscriber and you would like access to the Vega Options private Twitter feed, you can sign up for a 14 day Free Trial to try out the service. What have you got to lose, it’s free!