The structure we used for this trade was a ratioed risk reversal.  This meant that we sold twice as many calls as we bought puts.  The composition of the trade looked like this:

You can see the trade in an easier format below: 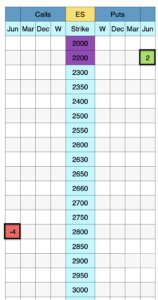 So how does this structure work?

If you refer to the above trade matrix the first thing to notice is that there is a gap between the strikes from 2200 to 2800.  This actually creates a plateau of risk among these strikes at expiry.  If the underlying expires anywhere between these strikes the whole position will expire worthless and a loss will be made if the position was set up for a debit, or a profit will be realized if it was set up for a credit.

In the case of our trade, an expiry between the strikes would realize an $8,200 credit as this was what we received when we initiated the trade.

Naturally we have intrinsic risk above 2800 and profit below 2200, but it is important to remember that this trade is bearish from the moment we create it.  This is because the sold calls have a negative delta, as do the long puts.  The total net delta of this structure was short 175 or the same as selling 1.75 e-mini futures.  The difference being that we have the luxury of the plateau area where the trade can expire and still realise a profit and also that even though the P&L of the position is moving all the time, we know that ultimately unless we expire above 2800 we have no risk.

Normally a risk reversal would use the same amount of puts and calls, however here we have used a ratio.  The reason is partly to do with the way volatility moves in options price and also the underlying VIX being so high.

With the VIX at 60, selling options is extremely attractive and so premiums are elevated well beyond what one would normally see.  This meant that even though we were trading just below 2600, at 2800, 200 handles higher, you could still receive a premium of $81 giving you cover until 2881 along as you don’t use that credit elsewhere.  We felt that this seemed like a very attractive risk/reward.

Should the S&P have started to rally, especially if this had been a slow, grind higher type rally, you would expect to see volatility fall.  This would mean that even though the market would be moving against our position, the price of the 2800 calls would start to collapse due to implied volatility dropping.  In fact, this drop can sometimes be so dramatic that it can almost entirely offset the underlying sensitivity to price of the option (delta).  Meaning that in truth, the 2800 calls delta is considerably less than it appears once the market starts rising.  Every time the volatility drops, even though the market is moving higher and the delta moves the price against us, it takes great chunks out of the options price at the same time.  For this reason, in highly volatile markets, if you are trying to get swing long for example, it is always better to sell a put than to buy a call.

So, as well as having the 200 handles of safety, when considering the vol crush that would occur should the market start moving higher, we considered the 2800 calls to be very attractive.  On the other side of the trade is the puts at 2200 which also have exposure to volatility.  Should we be correct in our view and the market start to fall, you would expect volatility to rise and therefore further bolster the value of our 2200 puts.

As we thought (although it happened very quickly), the S&P fell from the 2600 level overnight to 2490, we were actually looking for this move over a few days.  This was a 110 handle drop which meant that the value of the calls we had sold collapsed as the market fell away from them and the puts rose in value very quickly as the market approached them.  The VIX also rose from 51 to 57 meaning our puts were further bolstered by a rise in volatility.  The net effect was that we were able to close this position for a profit of just over $10,000 in less than 24 hours.

I hope this gives a good example of how you can structure an options position with different variables and scenarios taken into account.  Although ultimately this position had a P&L pay off that looked like a short future, in fact it was a lot less risky due to the “safe” area between 2200 and 2800 that actually guaranteed a profit on an expiry there.  It would also have made money just from a fall in volatility, or through the passage of time as the time decay ate away at the short calls.  Once again for these factors to play out, it was important that the structure was a ratio meaning we were ultimately short more options than we were long.

For a FREE TRIAL to our PARAGON OPTIONS service CLICK HERE.

Matt is a highly experienced options trader of 17 years, having been a private client broker and an inter-dealer broker in the city of London as well as working internationally in Australia during the commodities boom. His specialty is a sophisticated use of options to create portfolios or “books” of options using multiple time frames, strikes and varying quantities.