The Options Trading and Investing service provides perspective on high quality setups and option trading strategies. We carefully select these setups due to their quality and profit potential and we report back on results. In the weekend free webinar I review current portfolio performance and I also discuss techniques that I utilize to help reduce risk and, in some instances, lock in profits from previous trades. This week I discuss positions in GDX, AAPL and RUT.

This past week was very constructive for the option portfolio as it was up $1,150 over the previous week. It is now flat for the year overall but it has over $4,000 in profits on closed positions. It is very common for the open positions to be at a loss in a longer term option portfolio because much of the profits accrue from the passage of time. As I close out positions for a gain it constantly drops the open P/L back down on the open positions. In a healthy option portfolio you should expect to see that combination. Obviously, I need to get the loss on the open positions down and a turn lower in the market indices would resolve that issue rapidly! My job is to keep having profitable trades to close out while establishing new positions with good potential to profit over time. We are well positioned to make that happen.

Below is a direct quote taken from the April 23rd option blog post regarding a strategy I call a Ratio Diagonal Spread in GDX.

“Why would I choose this particular strategy? My primary goal in building an options portfolio is to acquire assets (long options). My secondary goal is to create liabilities against those assets (by selling options) to reduce their cost basis and create positive Theta for the portfolio. So, first step in this trade was to acquire 3 of the Jan2018 GDX 25 Calls because Stan is longer term bullish on GDX. Those cost 2.43 each or $729 for the 3 contracts. However, Stan is quite bearish in the shorter term so I wanted to reduce my cost basis in the assets. I sold 6 of the Jun16 GDX 24 calls for 1.14 each or $684 for the 6 contracts. My total cost for the spread is a net $45. What needs to happen for me to own the 3 Jan2018 calls for that total price of $45? As long as GDX is below 24 as of Jun 16th, those Jun16 calls (the liability) expire worthless and I own the 3 Jan2018 calls (the asset) for the net down price of $15 each.”

How is that strategy working out? Below you can see the 3 Jan2018 GDX 25 Calls highlighted in yellow. Where are the 6 Jun16 GDX 24 calls I mentioned above?

When I bought back (to close) the Jun16 calls I cleared the liability which allowed me the opportunity to sell additional calls against the asset (Jan2018 calls) that I owned. On May 30th I then sold 6 Jun16 22.5 calls for $.70 each. Those calls have the same expiration as the 24 strike calls that I closed out. Why didn’t I just keep them until they potentially expired worthless on Jun16? This is where the value of subscribing to the Art of Chart is especially important. Stan was bearish in the short term on GDX. The 24 calls that I was short only had $.18 of value left in them. If GDX was heading lower I wanted more premium to accrue from the move lower because I am long the Jan2018 GDX 25 calls and they will be losing value if GDX goes lower. In rolling the position’s short calls down from the 24 strike to the 22.5 strike I collected an additional $.52 ($.70 – $.18) of premium.

So what is my net down cost in the Jan2018 25 strike calls? Start with the $729 cost. Reduce it by $576 profit from the short Jun16 24 strike calls and the net cost is then $153. Reduce it again by the open profit of $81 in the short 22.5 calls and the net cost is $72. If GDX is down 1.4% or more this week to below 22.50/share the Jun16 22.5 strike calls will expire worthless generating another $342 in profits. If that happens, the net cost on the Jan2018 calls will be negative $270 which is another way of saying that I was paid $270 to own an asset that doesn’t expire for another 7 months. If I own those calls with a negative cost do I just sit on them and hope GDX goes up so that I make lots of money on them? No, I continue to sell calls against them according to Stan’s price and time targets over the next 7 months.

This is the risk profile of current position in GDX. Delta is short (negative) 243 and the position is making $19.43 in Theta. Peak profits occur if GDX finishes the week at $22.50/share.

Here is another look at closing out a profitable position leaving behind an unprofitable position. When Stan was calling for lower oil (USO) back in April I established a short Call Vertical Credit Spread by selling the Jul17 11 calls and buying the Jul17 12 calls for a net $.33 credit. On 6/7 I bought back (closed) the short calls for $.05 that I originally sold for $.75. That realized a $1,400 profit. However, that left behind the long 12 calls that I bought for $.42 that are showing a $630 loss. Why didn’t I close them as well? When you subtract your commission sometimes you’ll find that it didn’t really pay to close a long option position. I am resting an order to sell them for $.03 with the hopes that maybe they will get that price if USO rallies a bit here. If not, I will probably try for $.02 but even that might not fill. In any case, it never makes sense to sell a long option for less than the commission will cost you to close it out! Short options are a different story. They are a liability and if you are short naked options a large move against you could cause significant damage so it makes sense to close them when they have relatively little value left. 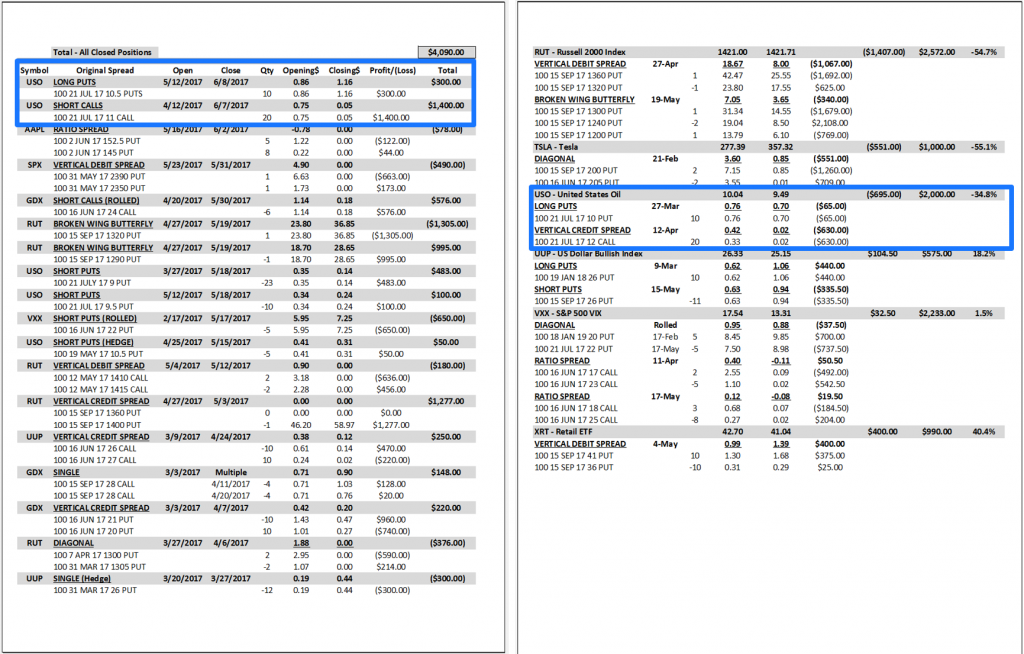 Below is the current position in AAPL. It is a long-term Stock Replacement Strategy that deserves a place in any option portfolio. Why do I call it a stock replacement strategy? What advantages does it have over simply buying the stock? As you can see below, the position is profitable as long as AAPL’s price is below $158.34. There is no risk to the downside. That feature is not available if you purchase the stock. But AAPL stock pays a dividend. If the stock just hangs around here for the rest of the year you would still collect another $189 per hundred shares in dividends. In this position I will accrue another $3,230 in Theta ‘dividends’ if the price hangs around the current level. I would have to own 1,700 shares of AAPL to earn that much in dividends. If AAPL goes much higher in price owning the shares keeps making more profits. This position doesn’t. That is where the difference lies. This position doesn’t benefit from a big move higher like owning the stock does. That has been the big advantage to owning the stock over the past year. Will that continue? Stan doesn’t project that to continue in the Big Five Chart Service view of AAPL. If you are not a subscriber consider the 30 day free trial to see where he and Jack think AAPL is headed over the next year.

Going forward I will keep an updated comparison of how this strategy has performed in comparison with owning the stock so we can all see how it is working. As of the close on Friday 6/9/2017:
The option position I established used up $5,000 of margin. For that amount of margin, I could have instead bought 72 shares of AAPL stock at $139.79 on March 1st.
On 6/9/2017, AAPL closed at $148.98/share. If I had bought the stock my profit would be $661.68. The option position currently has a loss of $257.00. That means that the option position has under performed the stock purchase by $918.68.

If I was allowed to switch positions and take the stock position and the open profit but I had to hold whatever position I owned through Jan2018 expiry, would I make the switch? Not a chance! How about you?

Below is the risk profile of a potential position in RUT. Why would I consider this position? This is a low risk position if RUT does not go significantly lower in price prior to Sep15 expiry. This position would cost $145 to establish a 1-lot Broken Wing Butterfly (BWB). What is the potential maximum payoff? If RUT closed at 1250 on Sep15, the spread would be worth $5,000. Subtracting out the $145 cost would leave a $4,855 profit. The max loss would be $2,145 but would only occur if RUT was below 1180 and the only way RUT gets there is by passing through the profitable area first. That means that I would be looking at closing the position out when RUT is in the 1250-1270 area. Looking at the risk profile if RUT is about 10% lower in that price area, the position would only have a $122 profit. Not very impressive is it? However, that would be the profit if RUT got to that price tomorrow. That doesn’t factor in the time that it would take RUT to get there. What if RUT got to that level around September 1st?

Below is the risk profile of what the position would look like (approximately) if RUT was trading at that price level on Sep1. You can see that the expected profit would be around $1,100. Based on the $145 I would pay for the position, that would be about a 7:1 reward/risk ratio. Even based on the max loss of the position that profit would represent a 52% return on risk for a 3 month position. I am always prepared to take the maximum loss if something catastrophic happens to the RUT that causes price to push through the profit area without me getting a chance to close the position but that is an extremely low probability of outcome. This is just one example of shifting risk on a position to the least likely outcome in order to reduce the cost of the most likely outcome. I wouldn’t fill up my portfolio with these kinds of positions but they can have their place in a well balanced portfolio to catch a large move without costing much.