Sometimes as I cook with my older children we take a moment to discuss the great issues of our times and, after a quick foray this afternoon into the placebo effect and alternative medicines, my son and I decided to tackle the important matter of adapting Schrodinger’s famous quantum physics experiment to fit the perspective of our labrador/poodle cross Pippa.

As Pippa’s main and possibly only interest is in food, we decided to replace the cat with bacon, which would be placed in the same locked box with an atomic clock that, at the key random point of atomic decay, would now trigger a process that would perfectly grill the bacon. The bacon would therefore exist in a quantum probability cloud state of cooked/uncooked until the moment that the state was crystallised by Pippa’s observation of the bacon, obviously through smell rather than sight.

This raised some interesting questions. Could Pippa influence the final state through her clear preference for cooked bacon? Would the odds of the bacon being cooked be affected by the aroma of cooked bacon being much more powerful than uncooked? Are there any real world materials that are truly impermeable to the aroma of cooked bacon? Good questions all, and doubtless physicists will be considering these in depth over coming decades. As our initiation of this great project is now complete, my son and I are thinking of looking at world peace tomorrow. 🙂

On to the markets, where ES/SPX has been backtesting the resistance broken on the announcement later yesterday that Trump and Juncker had agreed on a trade deal to avoid mutually higher tariffs. The low for that backtest may already be in and we are leaning long in the expectation of seeing the all time highs on SPX retested in the next few days.

I was saying in my last post that the closer SPX came to the retest of the all time high (ATH), the more likely it would be that the retest would happen before a significant retracement rather than afterwards. At this stage the main pattern from the lows this year is the rising channel that is the thrust up from the lows on the bullish triangle that formed from the 2018 highs. The minimum target for that bull triangle/flag is the ATH retest and you can see on the chart below that the ATH and rising channel resistance will cross at the close tomorrow. The ATH retest doesn’t need to be then, but is likely to happen in the first half of next week, and from there we should see the decent retracement that we didn’t see last week, possibly back into the 2800 area, before likely continuation higher. Any retracement on the way into that ATH retest is now likely both to be modest, and to be a buying opportunity. 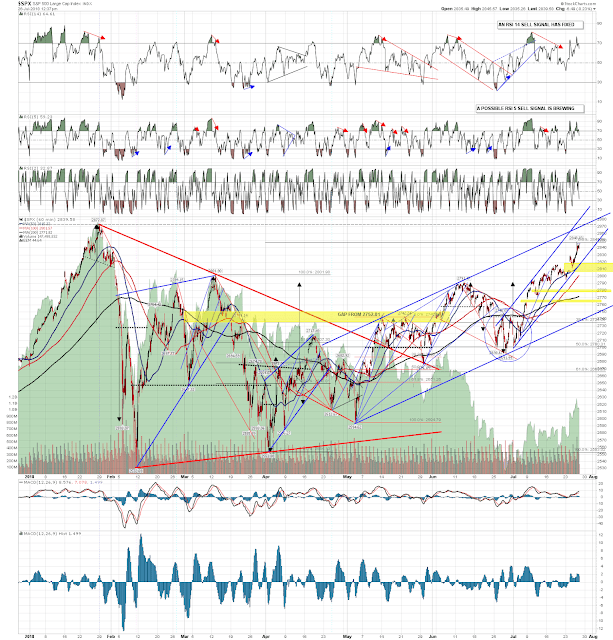 A couple of announcements to make today. The first is that our new directional options service Paragon Options finished the first month of trading with a respectable 5.43% profit on the $100k model portfolio, slightly more than 15% return on margin employed. We’re expecting to average returns of at least 5% monthly in future and, if you’re interested in a 30 day free trial, you can sign up for one of those here. Over 90% of those who took a free trial a month ago have converted to being monthly subscribers at the end of their trials. The second announcement is that I’m sort of on holiday next week as I’m taking a one week course learning ancient greek with my daughter. I’ll try and get a post out next week but it may not be possible depending on time constraints.