Skip to content
In the last week we’ve closed out an oil straddle in paragon options while we were involved in the black swan event in Crude Oil. Most training services you’ll find on the Internet only show you large winning trades, however today I thought we would do things a little differently and show you a trade that went wrong and ultimately lost money but was managed well from the risk perspective and closed out for only a minimal loss.
About two weeks ago we had seen relatively large swings in the price of oil on a daily basis. Oil was moving quite quickly from me $54 area to $60 area and then back again and had wide daily swings. This lead the implied volatility of oil to increase from its usual 24% to much more elevated 35%. At this point I started looking for volatility trades that would be attractive in such an environment. After looking at the TA with the other members of the team I decided that the 5450 straddle was an attractive trade. This trade netted $4.63 in the form of credit and so gave us nearly at $10 range in which oil could settle and the trade still be profitable with maximum profit realized at the 5450 level.
Below is a trade matrix of the straddle: 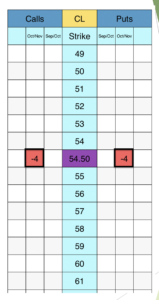 The trading initially did very well going over $1000 dollars onside within the first three days. However over the following weekend we had the oil attacks in Saudi Arabia which sent oil initially 14% higher up to a price of $63. This was well outside our upper profitability level of 5913. Immediately following the attack at the open on Sunday night implied volatility in oil spiked to 75%.
This meant that our oil trade was immediately offside to the tune of around $8000. The first thing one needs to do if you’re caught in a black swan event such as this is to hedge your risk. We were in a very uncertain news environment and any further attack or retaliation by Saudi could have caused the price of oil to spike even higher. Implied volatility of 75% made the purchasing of options (in this case call options) to hedge extremely expensive and in any environment where volatility is as high as this as an options trader you want to be a net seller of premium wherever possible.
This left us with only two options, either buy futures to hedge the upside or sell puts. If we take the first choice of buying futures, while this may immediately look like a good idea we felt pretty confident that the initial spike in oil would be retraced as it was largely people scrambling to hedge their risk and we felt would see lower prices quickly. Therefore purchasing futures to totally hedge the position would effectively lock in our loss and
on any retrace in the price of oil we would not make anything back on the drop.
By selling put options we were able to flatten the delta or our position by taking in a large credit do to the extreme premiums and crucially only had two days to wait until they expired as we used the October options instead of the November options where our straddle was. The effect of selling for over $60 puts created a guts position between the 5450 calls and the $60 puts. This meant that if oil stayed above $60 for the next 48 hours we would keep all of premium received which totalled just over $5000 ($1.26 per lot). Should oil go below $60 then we had $1.26 of coverage but even below that the loss that would then be incurred on the puts would be offset by equal an equal gain on the 5450 calls.
Here is a trade matrix of the modified position:

This is a guts position. If a guts position is set up at the same time rather than legged into as this trade was the premium received will be greater than the distance between the two strikes and as long as the underlying expires within these two strikes a profit will arise. Crucially a guts position has a zero delta and so does not move around as the underlying moves.
As mentioned we legged into our position and so did not have a zero delta but it did have the effect of more than halving our straddles delta from 77 to 33. This effectively cut our risk by more than half. Over the next 48 hours we did indeed see oil fall back below the $60 mark trading as low as 5880. At this point we were now inside our guts and close to using up all of the credit received from the $60 puts ($1.26).
However because we had now traded five dollars lower than the $63 high the straddle had substantially come back onside. At this point we started to look for our exit from the trade as the initial idea of oil trading within a $10 range was now defunct. The team saw a bounce up to the $60 level and then further retrace lower. We decided to monitor oil and on a bounce, exit our $60 puts. They were exited for a cost of $.25 netting us a $4000 profit. OiI did then indeed fall back from the $60 or level and we exited our straddle for a $5000 loss less the $4000 profit from the $60 puts meant that we exited the entire trade for only a
$1000 loss.
This is trade and subsequent risk management show how knowing the right tools to use and when to use them is invaluable in options trading. To a less experienced trader the purchase of calls may have seemed the most logical way to hedge risk but in this case as we had a retrace in oil they would have realized a total loss on the calls. Furthermore had oil not gone any higher and just pinned at $63 then the purchase of calls would’ve also lost a huge amount of money as the volatility would have collapsed and more than half the value of the calls would have been lost. By selling puts we exploited the higher volatility and stacked the odds in our favor as it was much more probable volatility would fall from 75% than continue to climb.

Matt is a highly experienced options trader of 17 years, having been a private client broker and an inter-dealer broker in the city of London as well as working internationally in Australia during the commodities boom. His specialty is a sophisticated use of options to create portfolios or “books” of options using multiple time frames, strikes and varying quantities.