Trading is hard. That’s not breaking news. We all know that. The hardest part of trading for most is once in a trade when to exit. Often a trade is initially profitable only to have it reverse and take back all of the profits and then some. After that experience it’s easy to exit a profitable trade too quickly only to see the instrument continue moving in the direction of the original profitable trade. “If I had only stuck with that trade I could’ve made so much more…”. Been there, done that. But, I don’t do that anymore. What’s the alternative? It’s a whole different way of managing trades. If your happy with you’re current trade management you can skip the rest of this post. But if you’d like to learn another way of dealing with that issue, read on. It just might change your whole perspective on trading!

Below is my tweet from 11/24 regarding the price action in AAPL. The stock had been selling off over the previous 5 days and was very oversold. When price dropped well below, then back above the previous day’s low from that oversold condition I began initiating a new long (bullish) position in AAPL. 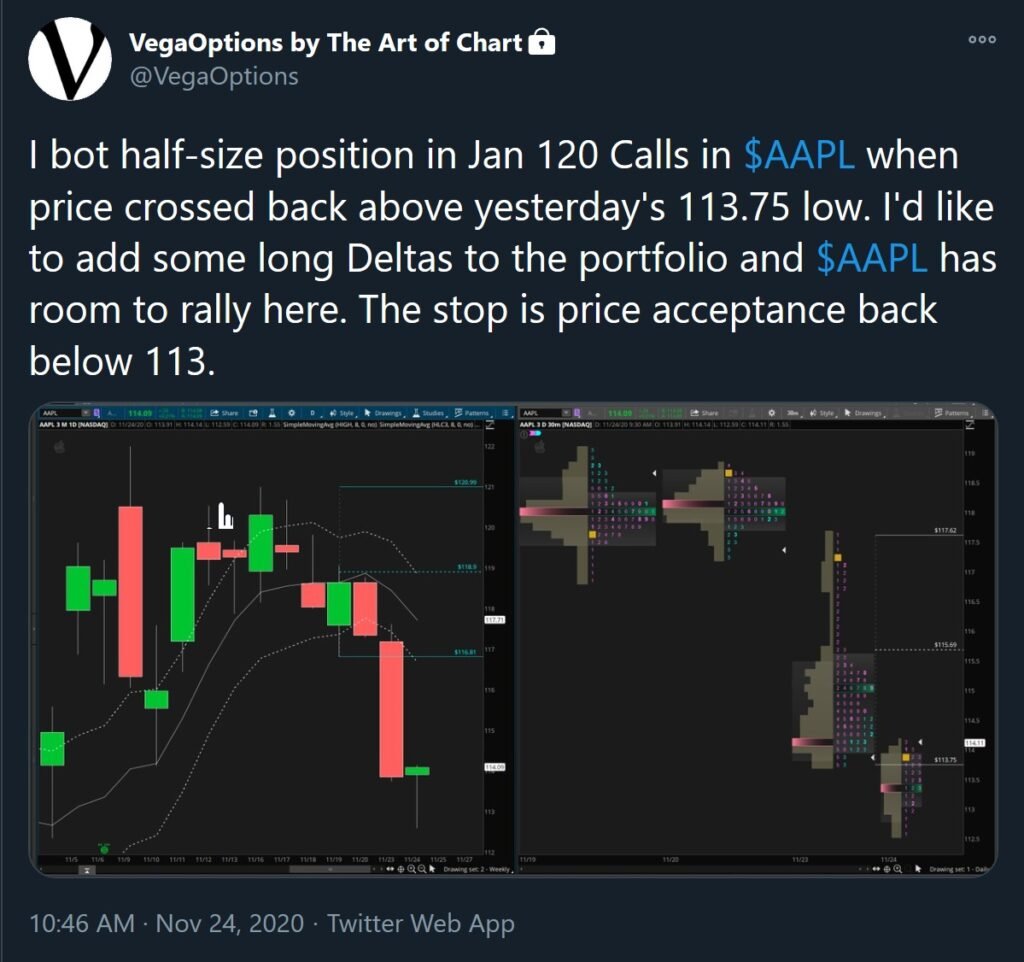 Within about 30 minutes I had finished establishing the bullish position by buying Jan 120 Calls for an average cost of $3.10 each. Immediately after establishing the bullish position I was already resting an order to start the process of reducing the initial cost/risk of the position. That doesn’t mean I was planning to close the position and taking profits, rather I was utilizing a strategy that I refer to as Delta Hedging (DH) to reduce the net cost and directional risk of the position. More about that later! 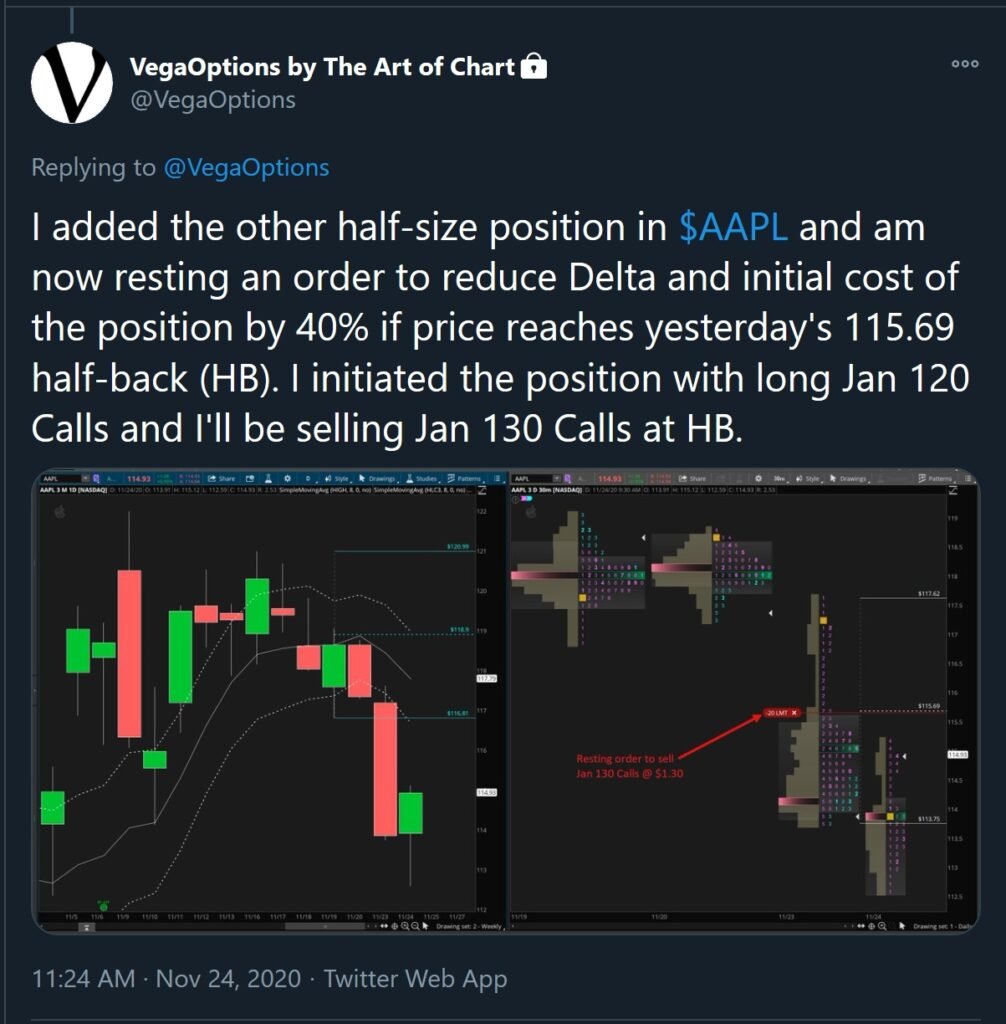 I rely heavily on Market Profile for reading the intraday price action. That doesn’t mean that I’m looking to scalp intraday positions but I am looking for a good entry point for trades lasting anywhere from a few days to a few months. Finding a good entry point with a well defined stop is always beneficial no matter what time-frame I’m trading! In the tweet below from around 2 hours prior to the close I again mention my plan for DH’ing the position and reducing cost prior to the close. That means that even though this is a Jan position I’m looking to reduce risk already within the same trading day that I initiated the position. 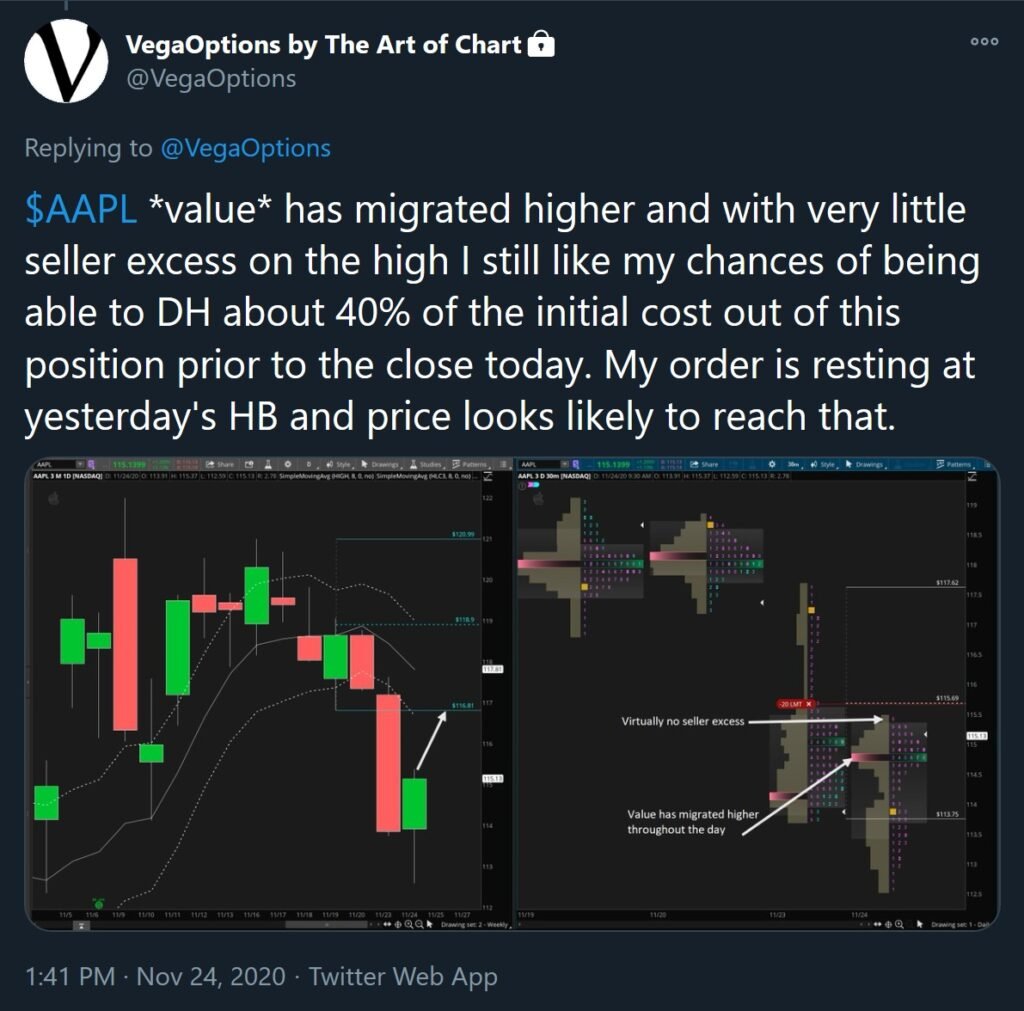 In the tweet below I mention how I had just filled the first adjustment to the original trade. By selling further out of the money (OTM) Calls in the Jan expiry I ‘rolled’ the long Call position into a Call Vertical Debit spread. 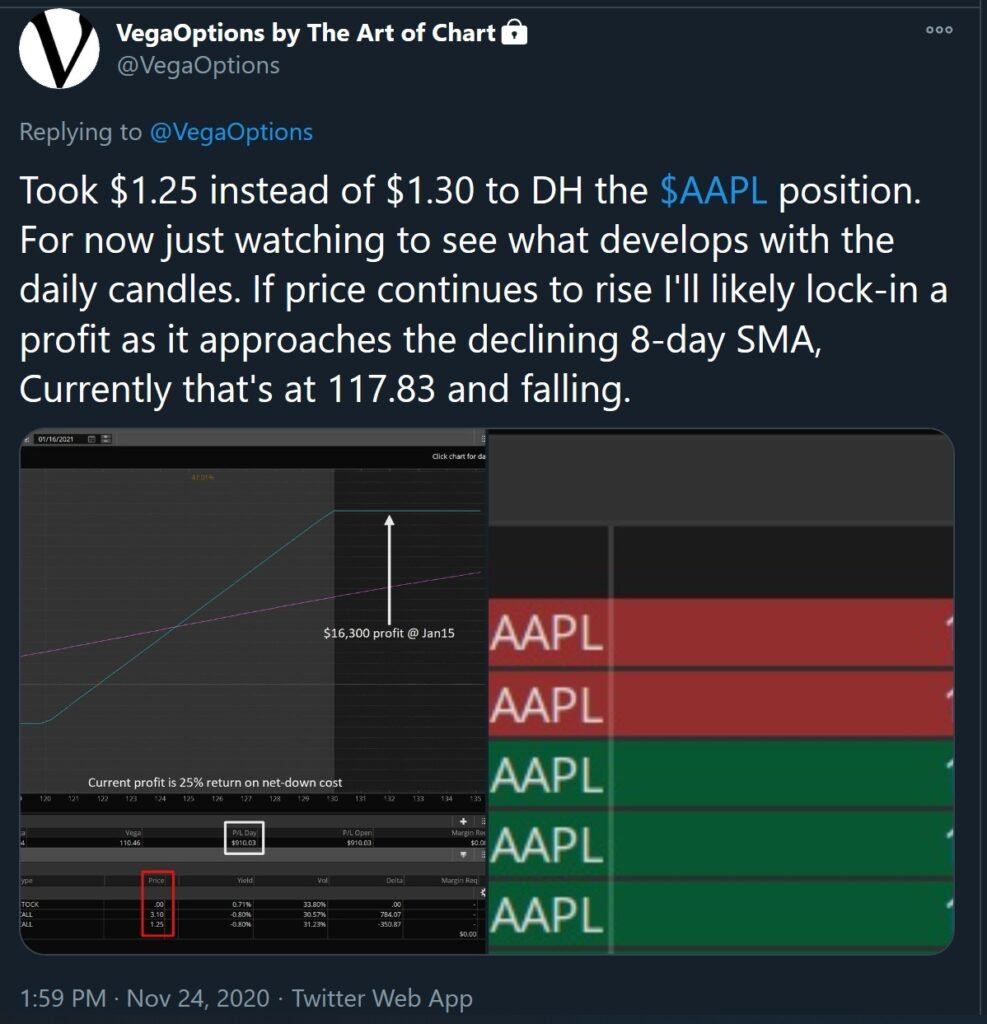 Below is the risk profile for the Jan15 AAPL 120 Calls. A pretty standard opening order right? Everybody who has traded options has bought ‘naked’ Calls or Puts at one time or another. It’s a great directional play but with with a heavy carrying cost due to negative Theta. I don’t hold long Calls or Puts for more than a few days max because of that value drag. In this particular AAPL position, I held these un-hedged long Calls for less than 4 hours!

Below is the risk profile after I made the first adjustment to the trade. I originally paid $3.10 for the 120 Calls and sold the 130 Calls for $1.25. I now owned a $10 wide Call Vertical Debit spread with a net cost of $1.85. The ‘legging into’ this spread was due to reading the intraday price action on the chart. Had price instead turned lower I would’ve stopped out of the position at a relatively small loss. But, since price continued higher as the chart analysis indicated was likely, I took advantage of that to lower that initial risk.

I wasn’t necessarily anticipating this being a long-term trade even though I chose the Jan expiry. Nobody ever knows where price will be a month or two in the future and I like to ‘stock’ my portfolio with as many of these Delta Hedged positions as possible. However, based on the chart I was simply looking for price to rise to at least the declining 8-day SMA which was below 118 and dropping at the time. On 11/25, the second day of the position, as price moved higher again I rolled up the 120 Calls to the 125 Strike. That narrowed the $10 wide Vertical spread to $5 wide and brought in a $1.50 Credit. See risk profile below. That lowered my net cost from $1.85 to just $.35! I was making progress towards my goal of a zero cost (or lower) position. How can a position be less than zero cost? Keep reading!

On 11/27 AAPL once again moved higher and actually pushed above the declining 8-day SMA. That was the target I was looking for from the beginning of this trade. I took advantage of that push higher to make a likely final adjustment to the position by selling some $5 wide OTM Call spreads for a $.58 Credit. My original position and all subsequent adjustments up until this point were 20-lot trades. This final adjustment was for a 15-lot. That left my current position as an $5 wide Unbalanced Call Butterfly spread. (See risk profile below)

Remember when I mentioned earlier about having a position on for a zero cost or lower? Well, the risk profile above is less than a zero cost. In other words, the position now has a guaranteed minimum profit. When all is said and done, I can do no worse than have a $170 profit for this position while still maintaining a maximum potential gain of $10,170.

There is more potential implications to this strategy than you may first think. Of course it’s nice to have a position on that has a guaranteed profit but it’s just one position. Let’s consider my situation before I placed the original AAPL trade. Let’s say for arguments sake that I only wanted to put $6,200 of my total available risk capital to work at the beginning of this week. After the AAPL trade, that capital was all tied for the week. Now, at the end of the week, I own the AAPL position plus I have all of that $6,200 of risk capital available to invest again in a new position. If I can initiate a brand new position and successfully DH that position to zero cost or lower then I will have two positions in my portfolio and once again have that $6,200 of risk capital available for a third position. I’m leveraging my portfolio by building greater and greater potential profits without increasing the risk to my original trading capital. Think about that for awhile…

Vega Options is a options educational service managed by Paul Frey in conjunction with TheArtofChart.net. The service includes access to a private twitter feed and a private blog where option strategies and price action analysis are discussed throughout the trading day.