The Options Trading and Investing service provides perspective on high quality setups and option trading strategies. We carefully select these setups due to their quality and profit potential and we report back on results. In the weekend free webinar I review current portfolio performance and I also discuss techniques that I utilize to help reduce risk and, in some instances, lock in profits from previous trades. This week I discuss a Broken Wing Butterfly position in the E-Mini futures options as well as a new position in USO and an update to the EEM position. Finally, I update the Apple stock vs. Apple option ‘competition’ to see which strategy is performing best.

Below is the breakdown of all option positions.

Below is my tweet from Jul 6th to The Art of Chart subscribers regarding the open Unbalanced Broken Wing Butterfly (BWB) in /ES futures options. It deals with a very important option concept when a position is nearing expiration. 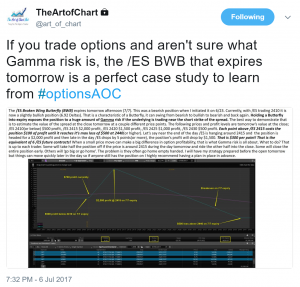 On July 7th I tweeted out the updated risk profile after I sold the 2440/2430 Put Vertical Credit Spread for a credit of $9.50. When I originally designed the position I did so when the intention of structuring it to allow for rolling the 2440 put down to a 2330 put and still have an equal amount of risk/reward on both sides of the spread. Since the original position cost $5.00, taking in a credit of $9.50 guaranteed that I could do no worse than make a $4.50 ($450) profit on the position. How did I decide on a $9.50 credit? The max value a $10 wide spread has is $10. It can never be worth more than that and, in reality, never really trades at full value. Without any regard for where I thought /ES was headed that day for me to be able to collect 95% of the value of a spread is a no brainer. In fact, I often leave a resting order in the system to collect 80% – 85% of any spread because I would be reducing risk by 80% – 85% while only reducing the profit by 15% – 20%. 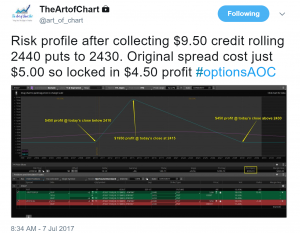 Current position in EEM is shown (below). This position has been underwater for over 4 months now as the move higher exceeded both initial time and price projections. Because I established the initial position back in February with a very long duration it has allowed me to be wrong and still be in the trade. Now, after all that time being down, I am in the position of needing less than a 3% move lower over the next 2 weeks to get back to break even. If EEM closes about 5% lower on Jul21 expiry the position will go from being down $783 currently to a profit of $760. That would be an improvement of $1,543. Notice the Theta in the position if EEM moves lower in price. If EEM were to make an immediate 5% move lower the position would improve by about $580, far less than the $1,543 I just mentioned. What accounts for the additional $963 of profits? Theta!!! I attempt to make most of the portfolio’s position benefit from Theta (time) and Delta (direction). The primary position, which is the longer term component of an overall position, is based on Stan’s long-term price and time projections If Stan makes a change in the primary projection or he sees a short-term opportunity I can adjust the position to match up with the targets. Other times I will adjust just because I have an opportunity to use the primary position as ‘cover’ for a new position. The goal is almost always an attempt to add greater amounts of Theta to my positions.

This is just the adjustment position in EEM that was part of the overall position on the last slide. You can see that the upside risk in adding this position was just $65 whereas it added as much as $935 of potential profit. The biggest risk to this position, a Put Ratio Spread, was a large, quick move lower soon after I initiated the position because there is undefined (unlimited) risk to the downside. However, the September position would have had a large profit on a move to the downside so that was what I was referring to on the previous when I said the primary position was ‘covering’ the new position. Now that 10 days has passed since I added this position, the current profit/loss line (CPL) is sloping upward and to the left so it doesn’t need to be covered anymore, it can stand on it’s own. In fact, there is a possibility that I may be able to sell a little more premium this week to eliminate the upside risk altogether.

Below is the newest position in USO (below). This is a Ratio Diagonal Spread. All experienced option traders are familiar with Diagonal spreads and most are familiar with Ratio spreads but very few combine the 2 strategies. Option traders are usually discouraged from selling in the money (ITM) options because anytime you are short ITM options you are subject to being assigned the shares in the underlying instrument. I utilize them as part of a spread when I want the position to be very directional (Delta) with a relatively large amount of Theta. This position was added when Stan felt a large move lower was imminent in oil. When I sold the Jul28 USO 9 calls they were almost $.50 ITM. However, after oil did move significantly lower in just a couple of days, the calls are now just $.10 ITM. The directional component of the trade has already paid off and even if USO doesn’t go any lower in price, the position’s profit will rise from $105 to $650 over the next 19 days. Think about this: the position could add $545 of Theta in the next 19 days if USO is relatively unchanged over that time. That is $28.68 per day. That equates to $10,470 in Theta over a year on a position using $2,586 in margin. That is for nothing happening in the price of USO! This is a good example of combing Delta and Theta to maximize the profitability of a position.

Below is the current position in AAPL. It is a long-term Stock Replacement Strategy that deserves a place in any of my option portfolios. Why do I call it a stock replacement strategy? What advantages does it have over simply buying the stock? As you can see below, the position is profitable as long as AAPL’s price is below $158.34. There is no risk to the downside. That feature is not available if you purchase the stock. This position doesn’t benefit from a large, immediate move higher like owning the stock does. That has been the big advantage to owning the stock over the past year. Will that continue? Stan doesn’t project that to continue in the Big Five Chart Service view of AAPL. If you are not a subscriber consider the 30 day free trial to see where he and Jack think AAPL (as well as NFLX, AMZN, FB, TSLA) is headed over the next year.