The Options Trading and Investing service provides perspective on high quality setups and option trading strategies. We carefully select these setups due to their quality and profit potential and we report back on results. In the weekend free webinar I review current portfolio performance and I also discuss techniques that I utilize to help reduce risk and, in some instances, lock in profits from previous trades. This week I discuss the new position in TLT and how to add a hedge to an existing position to adjust Deltas or prior to an earnings report. Finally, I update the Apple stock vs. Apple option ‘competition’ to see which strategy is performing best.

Below is the breakdown of all open option positions.

Below is Stan’s chart of TLT through the end of the month. If you are not familiar with the charting service Stan and Jack provide in-depth coverage on many different underlying instruments on all different time frames. In this chart, Stan is looking for the price of TLT to drop to around 120 by 7/30. Following a rebound in price after the end of the month low he is projecting the most likely scenario of TLT continuing to move lower into the Fall. Based on that projection I established a new position in TLT with an October expiration. 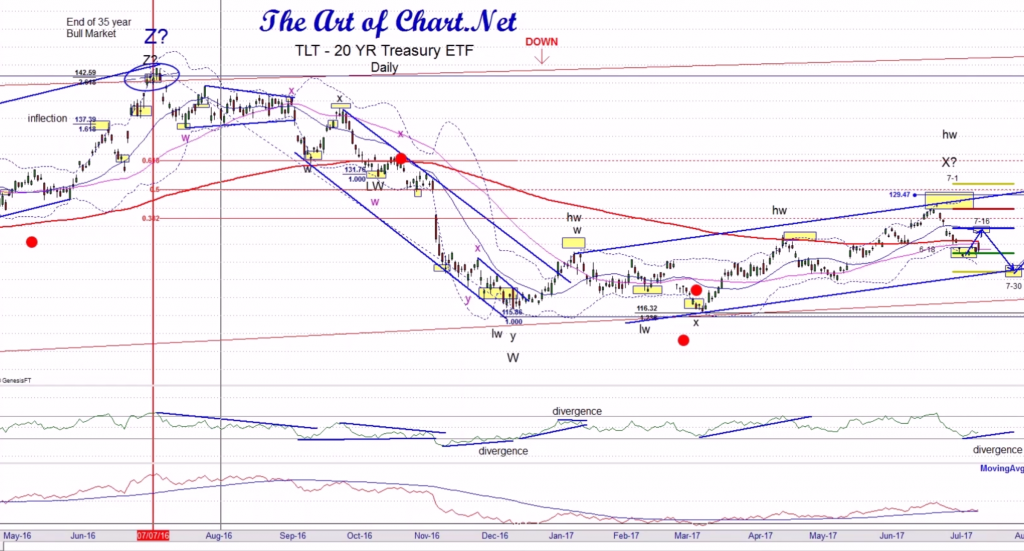 Below is the new position in TLT. It is short 122 Deltas. Based solely on probabilities, this position has a 50/50 chance of being profitable at expiration. That is because the current price of TLT also happens to be the break even price of the position. The worst possible outcome is a $859 loss. The best outcome is a $1,641 profit which is almost a 200% reward/risk ratio. Probabilities aside, the position is based on Stan’s projection of a move lower into the Fall. What about the move higher in price from the 120 level at the end of the month?

Assuming TLT hits 120 around 7/30, I would look to adjust the position as shown below. I expect that I would be able to sell 6 of the 115 puts in Oct expiry for around $.75 each or a total of $450. If you look at the risk profile below you’ll see that the 115 puts are currently selling for $.35. So how do I figure I will be able to sell them at $.75? $.35 is the current price of the puts with TLT at 123.33. However, if TLT drops by more than 3 points by the end of month, the 115 puts will trade for about the same price as the 118 puts are currently trading for. Since the puts are an Oct expiry, a relatively quick move lower allows me to do that simple estimate. I could, in theory, place a Good Till Canceled (GTC) order in the system right now to sell 6 @ $.75 and just let it rest. When (if) TLT gets to 120 the order should fill. In practice I don’t usually place the order now but rather place an alert to know when the ‘mark’ price is $.75 so I can then place my order. If I was filled, you can see that the Deltas of the position would be (approx.) 7.48 so then a move higher in price wouldn’t reduce the $300 in profits that the position will have earned. The Theta on the position would go from negative to a positive $6.95
Why not sell more to get more bullish? Stan expects the bounce to be counter-trend so at best I want to get neutral on a move higher.

Below is the current position in AAPL. It is a long-term Stock Replacement Strategy that deserves a place in any of my option portfolios. Why do I call it a stock replacement strategy? What advantages does it have over simply buying the stock? As you can see below, the position is profitable as long as AAPL’s price is below $158.34. There is no risk to the downside. That is not a benefit of owning the stock. This position doesn’t benefit from a large, immediate move higher like owning the stock does. That has been the big advantage to owning the stock over the past year. Will that continue? Stan doesn’t project that to continue in the Big Five Chart Service view of AAPL. If you are not a subscriber consider the 30 day free trial to see where he and Jack think AAPL (as well as NFLX, AMZN, FB, TSLA) is headed over the next year.

If I decided to hedge the position to minimize current upside risk I could do so any number of ways. One way is to simply sell a $5 wide, nearest out-of-the money (OTM) Put Vertical Credit Spread (aka Bull Put Spread). Selling a 10-lot would take the Deltas on the position from -79.72 to +2.65. The position would then be essentially neutral at the current price of Apple’s stock. Notice the adjustment didn’t cost the position any of it’s Theta. In fact, it increased the Theta by 40%! How much Theta would accrue over the next 187 days? The current loss on the position is $49.83. If AAPL is at it’s current price @ Jan2018 expiry, the position will have a $5,205 profit. That means the position will accrue $5,254.83 in Theta over the next 187 days. That is an average of $28/day in Theta. In percentage terms, that is almost 4%/week. In comparison, the stock pays a dividend of 1.69%/year. I wouldn’t anticipate holding the hedge all the way through expiry as Stan is expecting a large move lower in AAPL but I can add the hedge and then take it off at any time I want to increase my short Deltas again. This is something I will consider adding early this coming week. This adjustment can also be used to hedge an earnings announcement. BTW, the hedge would not add to the margin required.