Well, that was interesting yesterday, and that was a really impressive move on equity indices that finally ended the longest trading period in SPX history without a 5% retracement. The mindless bullish euphoria has ended for the moment, and overall, we should be back in a more two-way market environment for a while. In terms of this current move, we may now have started a retracement to take us into April or May.

In the video below, I’m looking at today’s rally. The obvious target on ES would be the 50% retracement in the 2700 area and Stan is looking at the 2700-40 area. After that, the odds favor a retest of the overnight lows, which were, of course, well below yesterday’s RTH lows. Intraday Video from theartofchart.net – Update on ES, NQ, and TF:

The first big support trendline was broken at the open this morning and that was rising wedge support on RUT from the early 2016 low. That’s likely to follow through to the downside after this rally. RUT daily chart: 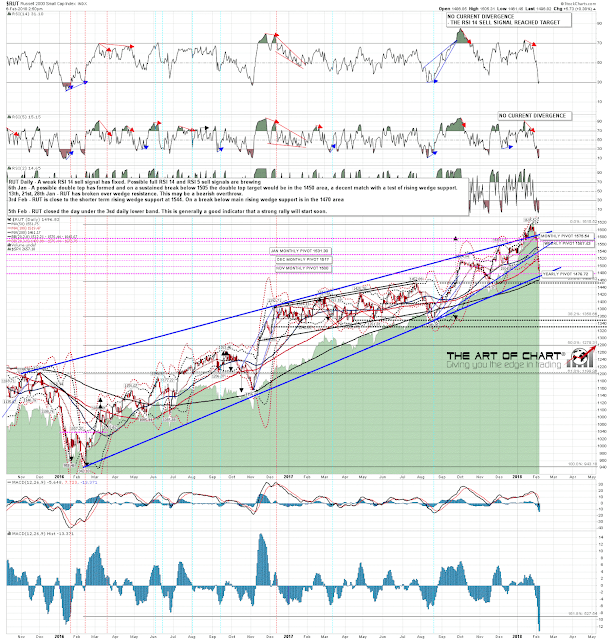 Is this the start of a crash? Unlikely, as this high is missing some important elements that would usually be seen at a serious top, but we may well be building towards such a serious top within a year or two. This is more akin to the bears starting to wake up after a long hibernation. They’re going to need some breakfast, a lot of coffee, and some warm-up exercise before they get seriously to work, and we’re likely to see equity indices make new all-time highs all round before that larger short setup is cooked.

Was the low yesterday a significant low? Unlikely. Again, at least some more work to the downside is likely required before equity indices can have another run at the all-time highs.