The Weekly Call provides perspective on high-quality setups and trading strategies. Our current performance is showing more than a 284% return since October 2016. The purpose of this blog is to demonstrate how to swing trade futures using our methodology to select high-quality setups and manage the trade with our risk management approach. This week, I am managing trades in Sugar, Natural Gas, Soy and Gold and looking to possibly initiate new trades in Lumber, Lean Hogs, Coffee, and Live Cattle.

All trades posted here are discussed in detail in our Daily Update Subscription Service and posted on our private Twitter feed. Our track record is posted below under Completed Trades. See some of our completed trade videos below.

The trades below are discussed on the Daily Update: – Click Here for a FREE Trial

7-1 – The capitulation low has been retested. Is the low in? Convert 893 and Soy should rally into monthly pivot next at 931. Convert 882 and likely we retest the low. Decision is likely on Monday. Cycles favor the rally from here.

7-8 – Last week 882s broke down and we were expected a low retest which has completed. Friday we had a strong squeeze higher and the low may be in. Watch for a flag in a three up which could signal a reversal but for now a back test into 925 is likely. If support is found after 925, likely the turn is in.

7-15 – Soy broke support and has put in a lower low. We are now at the 100% fib at 832. There is risk to 800. Break the trend line at 866 and a turn is confirmed. No reversal pattern here yet, am looking for a reversal pattern first before entry. Soy is signaling it is oversold here, and with the headline minefield with tariffs, likely volatility will  remain high.

6-10 – Still holding my trailer on Sugar and I am about to add size. I missed the perfect add at the broken trend line which is what I advised my clients this week. Retest of last week’s low is what I am looking for and roughly 11.90ish or so. I am a buyer of Sugar into the July window.

7-1 – Triangle is at support as of Friday. A decision on sugar is about to occur, break lower and chances are we retest the low. My lean here is higher into the 20th of July. Monday we need to see the upper trend line convert which is close to the monthly pivot at 12.46.

7-1 – Sideways price action here with a high in the 3.05 area, likely we are putting in a right shoulder. My lean is still lower here and we may retest 2.95 as a last wave e of a small triangle. Looking for the swing low to break and looking for a low into the early part of August. 2.50-2.40 still the target..

7-8 – Lower price action in a 5 down which should now retrace into 2.90. Once seen, I’m expecting lower prices into 2.70s. The next legg lower should have more juice to the move and eventually in August I am looking for a support test into 2.50-2.40. Stocks are building on Natural and seasonality is calling for lower prices.

7-15 – No significant retest yet, price is slowly working itself lower. Resistance at 2.85, still expecting lower prices into 2.40-50. Retest expected this week and lower prices.

5-20 – Live Cattle is in the last legg lower into the 18 month cycle window. I am expecting a major turn and a big rally from that area. We have not yet broken Wave y which should occur this week. This will set up positive D on RSI which is what I want to see before choosing my entry. I had a similar trade when I started the Weekly Call in October of 2016, this turn should not disappoint.

5-27 – Patiently waiting on lower prices and the 18 month cycle low on Live Cattle. We are approaching the slaughter peak and seasonality should press prices lower. I am still expecting wave y to break and see a lower low into our cycle date.

6-3 – Live Cattle may retest this week and then move higher. The 18 month cycle window may already be in. The retest this week if it finds support at 100.20 will call price higher into the 7/7 window and $108. If the trend line demonstrates support, I plan to enter long.

6-10 – Live Cattle price is inside the channel and heading into my cycle date. A retest is coming this week, so the lower trend line may be seen. This is a decent entry if the trend line holds. I like Cattle long into November.

6-24 – Waiting on the cycle window and the 7-7 high. On track to see that number and maybe more. Upper trend line is in the 111s. Once seen we have a more significant retest coming then higher into 120 next.

7-1 – Live cattle is in a final rally for this leg higher into the 108 area into the cycle high window this week. I am expecting a turn and lower prices next week for a break of the lower trend line and then lower into early August. Cycles continue to point higher into 120s into the late October / early November time frame.

7-8 – Live Cattle is in the timing window and at the price target. We need a higher high to set up neg D on RSI and I am expecting a retrace into the end of the month. Watch for the monthly s1 and 102s.

7-15 – Live Cattle turned in our timing window and we have now tested the lower trend line. Still expecting lower prices into the end of this month and $100.32. Three down is expected and lower prices for now. The next rally should take us into the 120s.

6-10 – Seasonality still driving the bus on Coffee as previously mentioned. Likely the move continues lower into the July cycle date and 114s. We have a lot of time to consider a major reversal in Coffee. – No rush to get long here, just keeping it on my radar for now.

6-17 – Retest and lower, still waiting on the long and the turn. Likely an 18 month cycle low in July in a few weeks. We now have a new low and also positive D, so I will be looking for a reversal pattern.

6-24 – We have a potential candidate low last week. Nice positive D, cycles are pointing lower. At this point I am waiting to see the outcome, form a reversal pattern and I plan to enter. Unless the setup is really good, I will wait for the cycle date.

7-1 – This month I am expecting a major turn in Coffee. Seasonality has been pressing Coffee lower here, likely toward the middle of this month we should see a low in the 114-112 area. Positive D on RSI is already in place, so coffee can turn at any time after we make a lower low.

7-7 – Coffee had a big move lower which may have signaled capitulation and a squeeze on Friday. We are a week early for a turn, but it may be in. The next support test will say a lot. On a retest of the low that finds support, Coffee can rally into $123s by early August.

7-15 – Coffee is three down at 109 and this is an area for a possible rally or Coffee will make a lower low this week. My timing window is this week and am looking for a spot to start a new position. I have been very patient watching this drop with the Coffee harvest in full swing, a setup should come this week.

6-10 – Reversal coming this week in Lean Hogs, a higher high first then the turn. Likely we see the lower trend line. If it holds, we see a strong move higher into October. Watching for a break of the RSI price cycle to indicate the beginning of the retracement.

6-17 – Cycle date has passed and we are at target and the retest has begin. Lower prices expected into 74.80-75 and the trendline. If support is found we should see higher prices into October. Break the flag and we open a retest of the low. Big decision this week in Hogs.

6-24 – As expected, turned in our cycle window and lower to the trend line. Hogs needs to find support at the trend line this week or we risk a full retest of the low. If support is found, the next legg up should last into October.

7-1 – Support found as mentioned last week, higher expected into the next high cycle in November. First target is $85, retest and higher into the November time frame with a possible move as high as $99.

7-8 – Support was found last week at the trend line and so far we have bounced, but monthly pivot has been resistance which may mean we see another leg lower to the S1 at 71.675. If seen, I still like the next rally higher into the $85 area. I am expecting Hogs to rally into October so the lean is still higher.

7-15 – Last week I called for a lower low at the monthly s1 and we are now there No change from last week’s expectations. The turn date  is later this week, and I am still expecting the rally into the $80s.

7-2 – The USD has turned and I am expecting Gold to turn as we have reached a critical area. Support at the trend lines, both channel and longer term support are likely to hold. The key with Gold here is a conversion of 72. Until then Gold has risk lower into 1230s. I like metals in general long here.

7-8 – Gold may have now turned, as we saw an overthrow of the channel and the longer term weekly trend line last week. I can confirm the turn once we convert 72s. Key resistance is there, if resistance is seen, we can see a full retest of 1230. I still like metals long here into November. Next cycle on Gold is higher, into 1315 by early August.

7-15 – On Gold, 72s proved to be resistance and we failed to convert and as mentioned we have seen the 1230s. The short term lean is lower to the next candidate turn area 1229-1226. I still like metals long here. I am looking for positive D on RSI and a setup for a long later this week. Failure to convert 50 after seeing this low will result in a lower low into 1210.

The purpose of this blog is to demonstrate how to swing trade futures using our methodology to select high-quality setups and manage the trade with our risk management approach. This track record is based on entries and exits as posted in this blog using a $50,000 account limited to a three contract position size. We will increase position size after we generate a 200% return. See the videos below for more information. 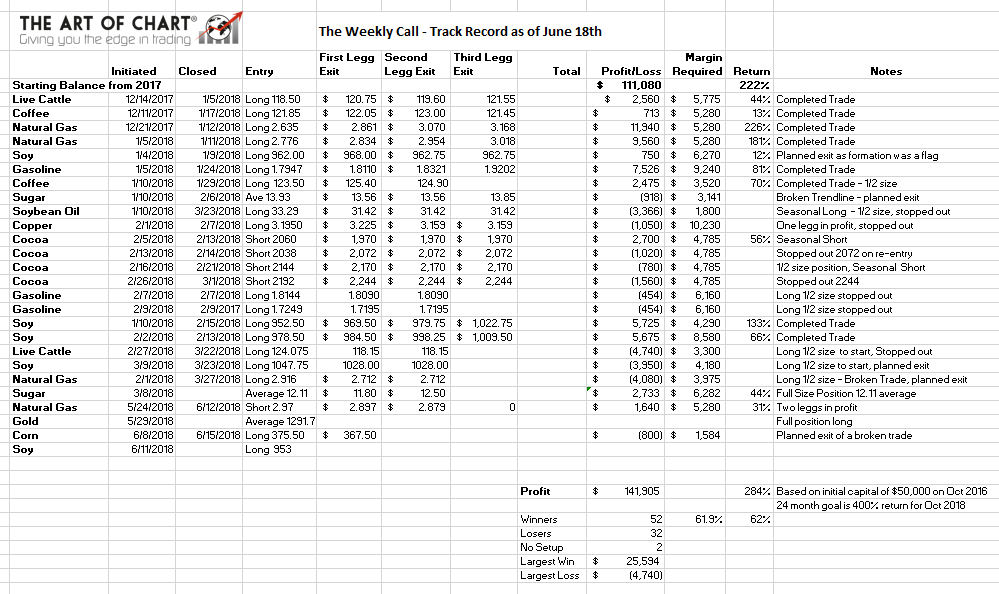 There is a substantial risk of loss of capital when trading and/or investing. Past performance is no guarantee of future results. See our disclaimer here.

Completed trade in Cattle as of November 28th

We expect subscribers to have captured 60% of the swing in live cattle which is over $14,500 in profit using a margin of only $5,115. A great example of using leverage in futures.

Completed Trade in Coffee as of December 12th

Completed Trade in Natural Gas as of January 2nd

We were stopped out of out last 1/3 position as weather-related news created a gap down on January 2nd and a possible flat with support at 3.196. This concludes our trade with natural gas; we exit with 550 ticks on 2/3s of a position with $8,500 in profit.

Completed Trade in Coffee as of January 19th

Completed Trade in Gold as of February 8th

We exited the gold trade on February 8th with over $14,000 in profit. We entered on January 3rd and held the trade into the high window. We will re-enter gold in a few weeks after a backtest.