After repeated tests where it held, the thrust down after the Fed hike on Wednesday broke down through the big support level and potential H&S neckline in the 2530-40 SPX area  and continued down. Wednesday night I was looking at the next big level on ES 2465-80 area and that too has broken yesterday. I’d be surprised not to see a strong counter-trend rally on SPX soon but it’s getting harder to identify where the next decent support might be.

Short term though, the ES low yesterday was an exact test of the possible falling channel support trendline that I had drawn in on my ES chart and, as long as that trendline remains unbroken, the obvious next target within the channel would be a test of channel resistance, currently in the 2570 area.

There are some things to bear in mind here on the bigger picture. Firstly, in the event that 2530-40 SPX was not going to be an H&S neckline, then the alternative was that it was double top support. That support has now broken down with alternate targets at either the 2200 area or the 2120 area, and my working assumption is one or both of those levels will be tested in 2019 as this move plays out. Large H&S patterns have now also broken down on both NDX and RUT, following the very high quality H&S on DAX which I’ve been watching form for much of the year and which broke down first. 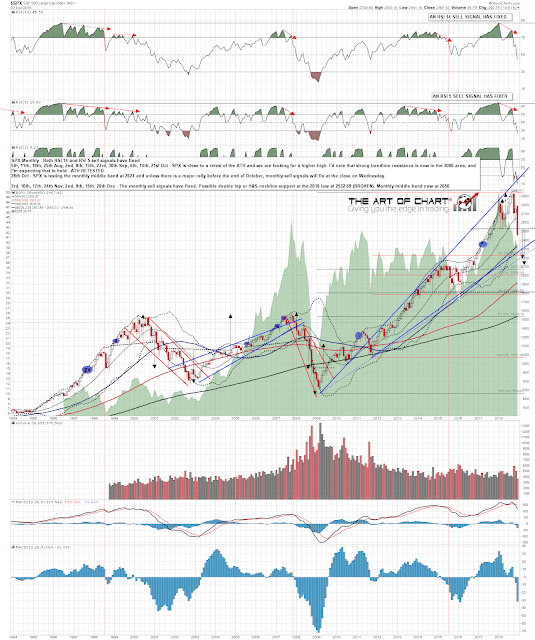 Stan and I are doing our annual free public webinar looking at the year ahead at 5pm EST on Sunday 30th December. All are welcome and if you’d like to attend you can register for that here. We will be looking at the usual very wide range of markets including equity indices, bonds, forex, precious metals and commodities.

Our usual end of year sale on annual subscriptions has started and as well as the usual free two months discount on these subscriptions there is a further two months (20%) off through to January 2nd. Our price guarantee as always is that as long as any subscription is continuous the price will never be raised on any product for any current subscriber. The sale code is XMAS 20 and the subscription page is here.

I’ll be working next week so there will likely be another post out before then. Until then though, everyone have a great Xmas/holiday. 🙂