The holidays are ending and volume should be coming back into markets next week as players return. New Year’s Day on Wednesday is obviously a holiday as well, and the five trading days after that will be closely watched to deliver an indication of how the rest of 2020 might go. I’ll be looking at that stat closely later in this post but first I’ll review SPX and NDX and the position as traders return for the last two trading days of 2019. I would note again that the last trading day of the year is the only historically strongly bearish day in December, with SPX closing down 67% of the time, and Nasdaq down 15 of the last 19 years.

I have a couple of quick announcements to make as well, the first being that Stan and I are doing our end of year free public webinar looking into the year ahead an hour after the regular trading hours close tomorrow (Monday). If you’d like to attend you can register for that here. We’ll also be doing our usual monthly free public Chart Chat next Sunday I think and I’ll post that link on my twitter feed once I have it. Lastly we are still running our annual Xmas sale on annual subscriptions at 20% off the usual price, so at a 33.33% total discount. That’s drawing to a close so if you are interested you should check that out here. On to the markets.

On SPX the daily chart on Friday closed with both the RSI 14 and RSI 5 at high levels, suggesting at least a retracement soon, and some negative divergence on NYMO, setting up a possible RSI 5 / NYMO daily sell signal if SPX retraces a bit and then retests the high to set up negative RSI divergence on both RSI 14 and RSI 5. Decent odds we see that play out over the next few days. 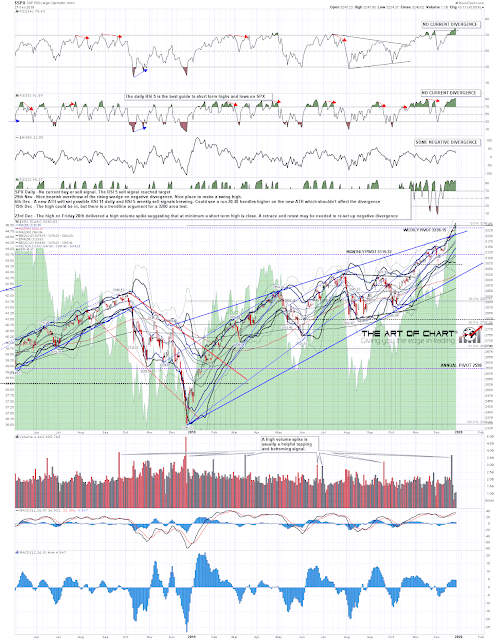 On the hourly chart SPX is testing support on the short term rising wedge from the 3070 low. An RSI 5 sell signal has fixed and an RSI 14 sell signal is brewing. On a break down I’d expect this setup to deliver a retest early next week of key short term trend support at the 50 hour MA, which closed Friday at 3218. From there ideally SPX would make a marginal new all time high and then fail into a larger move down. 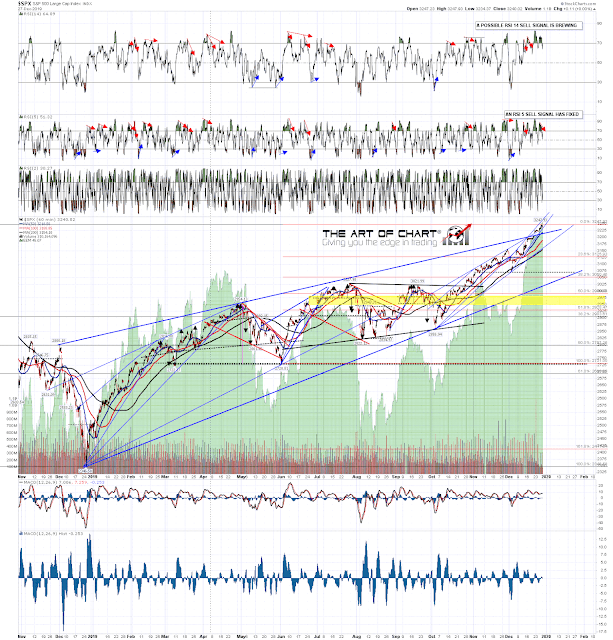 On NDX the daily chart looks similar to SPX on RSI, and I’d expect the same retrace and high retest scenario there. I’d note though that the current high is at high quality shorter and longer term rising wedge resistance, and any higher high we see on NDX may therefore be very marginal before NDX starts a move back to larger rising wedge support, currently in the 7900 area. 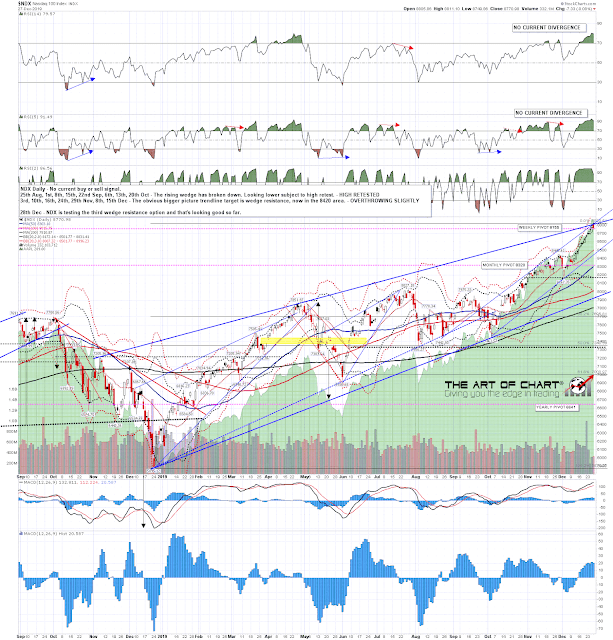 On the hourly chart you can see that trendline resistance in more detail and I’d note that weak RSI 14 and RSI 5 sell signals have both already fixed. Obvious first support at the 50 hour MA, which closed Friday at 8682. 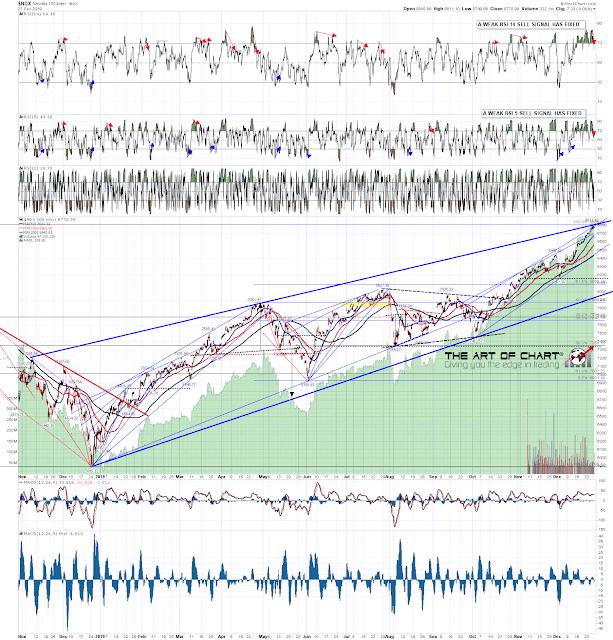 Nothing has changed on the bigger picture scenario, where we see a top forming here for a decline into April, and then likely retests of these highs from there.

Now if you have a horror of statistics you might want to stop reading here, and I’ll wish you the very best for 2020, as I’ll next be having a look at the famous traditional first five days of January as a predictor for the full year, and I’ll be doing that the old fashioned way, by looking at the historical numbers.

I’m taking my numbers from my newly arrived Stock Trader’s Almanac 2020, and I get a lot of the numbers I use from there, including all the historical stats for particular trading days that I refer to regularly in my posts. These are a very useful reference for traders and if you would like one then you can buy them at Amazon.

Now the stats shown for this in the Stock Trader’s Almanac cover the last seventy years, including 2019, which I am happy to assume for the purposes of this analysis will close green, as it seems unlikely at the time of writing that SPX will close 2019 below the 2018 close at 2506.85. If SPX should surprise me by falling over 22.6% in the next two trading days I will need to amend my numbers slightly.

The Stock Trader’s Almanac is keen on this warning system and gives it an 81.8% accuracy rate for green years from the last 44 years, with some excuses for years where special circumstances led to false signals. That’s all well and good but I’m using their numbers to get a fuller view of how this stat has performed.

First I had a look at the last seventy tears in total, and I’d note first that 51 of those closed green, so 72.86% green closes is the random chance baseline against which performance needs to be measured. On that basis there were 45 green closes for the first five days of January, and of those 35 closed green, giving a performance of 77.78%, significantly better than random chance. Having said that though I felt I’d get a better view if I eliminated the three years (1970, 1984 & 1987) where the gain for the full year was less than the gain in the first five trading days of January, as counted from from that point, each of those years then closed lower, and on that basis the adjusted performance was 71.11%, performing slightly less well than random chance would suggest.

Secondly, having noticed that this stat started with an impressive run of wins 1950-69, I stripped those out and just considered the last 50 years 1970-2019. Of these 35 years closed green (70%) and 15 closed red (30%). In terms of the first five trading days there were 33 green closes, of which 25 closed the year green, so the rate was 75.7%. I again then stripped out the three years where the full year’s decline was less than the decline in the first five trading days and that accuracy rate dropped to 66.67%, again less than random chance should have delivered. Not impressive.

On the bear side there were 17 red closes for the first five trading days of the year, which translated into 6 red yearly closes. That translates into a 35.3% accuracy rate, significantly better than the 30% random expectation, but much less impressive than for the longer period including 1950-69.

Looking at the numbers I noticed that there was another impressive period for this system in 2000-9, so I looked in detail at that. For those ten years there were six green yearly closes (60%) and four red (40%). In terms of the first five trading days of those years there were five green closes, delivering four green years, so 80%, 33.33% better than the 60% for random chance, and there were five green closes delivering three red years, for a 60% accuracy rate, 50% better than the 40% for random chance. This was a banner decade for this system, and it was such an interesting decade for markets that I wondered whether this system was still famous mainly because people remember it working well then. That brings me to my last sample group, the most recent decade 2010-9.

Assuming that 2019 closes green there will have been seven green yearly closes over this period (70%) and three red closes (30%). On the first five trading days of those years eight closed green, and of those years five closed the full year green, delivering an accuracy rate of 62.5%, significantly less than the 70% that random chance would suggest. However there were only two years where the first five trading days closed red, and both of those years closed green, delivering an accuracy rate of 0%, against an expected 30% for random chance.

So what’s the overall verdict here? Well in terms of green closes for the first five trading days of the years over this period, only the period 2000-9 delivered accuracy numbers that were better than random chance, which makes this January system somewhat worse than useless for predicting bullish years. The bearish year accuracy rate was generally better, but that good performance was confined to the periods 1950-69 and 2000-9. Outside those periods performance was worse than random chance would suggest, most particularly in the last ten years during which time this was entirely useless at predicting years that would close down.

Overall the positive reputation of this system seems undeserved and I’d recommend disregarding it as a predictive tool. Next week I’m planning to cover the January barometer system, which attempts to predict yearly performance from the close at the end of January. We shall see if that fares any better. Everyone have a fun New Year’s Day and a great new year in 2020! 🙂