This is an unusual post for me, in that it is not about the markets, but rather about an issue that might be a strong influence on the markets over the next few months, namely the current coronavirus outbreak that has so far been mainly confined to China. I’ll be reviewing what appears to be the cases so far from both official and unofficial sources, and share what I’m watching to assess whether this is likely to remain a mainly Chinese issue, or might spread much wider to become a worldwide one.

Regardless of the numbers though, some aspects of life in Wuhan continue as normal. Here is a recent image of a local resident out walking their dog in a familiar scene that might currently come from any number of large cities in China: 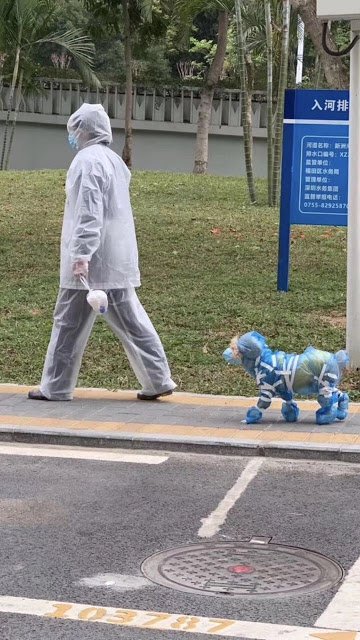 Setting the doubtful reliability of the official numbers aside for the moment, what we do have is the daily numbers for confirmed cases over the last few weeks, so what do those tell us? Well the earliest numbers I have are from 21st Jan, at which point there were 448 officially confirmed cases and nine deaths. As of this morning 18th Feb, using the excellent live John Hopkins CSSE page, that has increased to 73,451 confirmed cases, and 1875 deaths. That’s a period of 28 days in which time the confirmed case numbers have so far doubled 7.2 times, on average therefore doubling every 3.9 days or close to quadrupling every week. Obviously that’s a very high rate of increase, and, if sustained, could put confirmed cases close to a million cases within two weeks. The rate of increase for deaths over that period has been marginally higher, but in effect can be considered to be the same.

What about the fatality rate? Well so far if the death rate is simply divided by the confirmed cases rate, then that comes out at about 2.5%, though an adjustment to account for the lag between a case being confirmed and death, together with the effect of the high rate of increase in confirmed cases that might put the fatality rate at a less reassuring 5% to 10%. For reference that’s coming under SARS at about 10%, and the more virulent Mediterranean version MERS at about 35%. A more alarming calculation would be a division of reported deaths by reported recoveries, which comes through at about 14%, but that is likely to be an unreliable number for three reasons. The first of those reasons is that a lot of cases are mild and aren’t likely to enter the reported numbers, and that also most likely applies to both the SARS and MERS numbers. The second reason is that reportedly at least, only about 14% of the confirmed cases become severe cases and not all of those will be dying. The third of those reasons is a bigger issue that applies to all of the coronavirus statistics that we have seen so far, and that is that all of the official coronavirus numbers that we have seen from China so far are likely to be very understated, in effect more propaganda than genuine statistics.

Why is this likely? Well there is no free press in China of course, and social media is restricted and monitored, but with some local VPN connections to twitter accounts and local WeChat posts there is quite a bit of leakage. The images and videos of chinese police and soldiers apparently welding shut the entrances to some infected housing developments and tower blocks are disturbing, and the WeChat employment advertisements for extra help in funeral homes and for workers to collect bodies, as well as videos showing those bodies being collected, are also disturbing, and suggest both that the numbers of deaths are considerably higher than the Chinese government currently wishes to admit, and that the situation in Wuhan particularly may have deteriorated well beyond the ability to gather decent statistics even if there was any desire to do so.

There is some evidence that extra help has also been drafted in from other provinces to help handle the extra workload at Wuhan crematoria and funeral homes, and if that’s right, then the death rate must be a lot higher than advertised, as Wuhan has a population of 11 million, and the extra two thousand deaths officially reported so far wouldn’t be an inordinate increase over the 10,000 to 20,000 deaths that a city of that size should see in an average month. There’s also quite a lot of unofficial evidence that supply chains across China are breaking down, and that’s not just an issue for Apple of course, that’s also a big issue for the local production and distribution of food, which may be a serious humanitarian issue brewing down the line.

In terms of the economic impact on China this year that’s all worrying but the likely and ongoing uselessness of the official statistics from China should no longer be an issue for weighing whether the virus outbreak is likely to expand into a worldwide problem. Why? Well the chinese numbers may be unreliable but there are now significant outbreaks in three areas where the numbers should be of high quality, and as of this morning those areas are Singapore, with 81 cases, Japan, with 74 cases, and Hong Kong, with 61 cases. These countries all have decent health systems, and all three, with the possible exception of Hong Kong if pressure is applied on them, should report honest numbers about the progress of the outbreaks in their areas. We should be watching those carefully, and if this going to be a global problem, then that risk should first become apparent there.

What is going to happen to markets if this virus starts to develop into a global pandemic akin to the pandemic in 1918/9? Nothing good, so this is something I’ll be watching with keen interest, and will be including updates as they come in on my usual market posts. I’m planning to do one of those tomorrow.