Well it has definitely been a week to remember, with the coronavirus outbreak taking position front and centre. I was expecting a strong reaction as and when this penny finally dropped, though not this fast I have to say. Let’s review the bigger picture on SPX first.

On the bigger picture I was noting (notes on the chart) at the start of February the stats after the relatively small decline that we had just seen, and we saw the 20% odds reversal candle that sometimes follows such a decline. At that point there were even odds of resuming either the weekly upper band ride or the decline, and SPX has taken the second option, and is now (overnight) below the lower target at the weekly lower band in the 2950 area.

On the way SPX has broken the rising wedge support trendline from the Dec 2018 low and reached the minimum 38.2% retracement target at 2993 yesterday. The more usual target would be the 50% retracement in the 2880 area, and that area has been reached overnight. The possible weekly sell signals that I’ve been watching will fix at the close tonight and, depending on where that close is, the weekly RSI 5 sell signal will almost certainly reach target, and the RSI 14 signal may reach the possible near miss target.

How well is this setting up for the move to the 2500 main trendline support that I was talking about on Monday? Well I’m concerned that an H&S forming from a neckline in the 2800s would look for a full retracement of the rising wedge back to the 2346.59 low, and that would break my support trendline, but that would also be a strong target because it would also be an almost exact 38.2% retracement of the rising megaphone from the 2011 low. If that extended into a 50% retracement that would be in the 2025 area, and that’s about as low as I could see this move going, though that is higher than the 1800 that Goldman Sachs have been suggesting this week as a target. 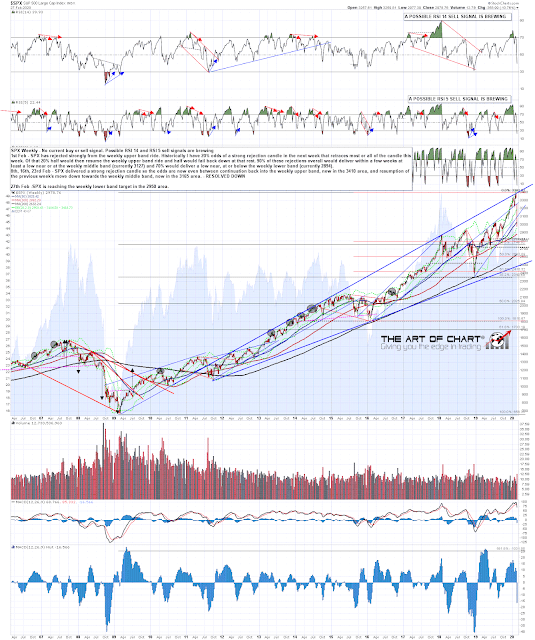 The daily chart has been interesting, with SPX falling down the obvious support levels day by day. On Monday the low was at the prior low and possible H&S neckline at 3214, then on Tuesday and Wednesday the lows were at tests of the rising wedge support trendline from the Dec 2018 low, which was breaking slightly at the close and then followed through downwards overnight. Yesterday SPX bounced at 3000 support and then fell through to close just above the annual pivot at 2974. If we don’t see the strong rally that we should really be seeing soon today, or if that starts today after a retest of the overnight lows, then the next big level is a range between the 50% retracement level at 2870, and the previous lows and possible larger H&S neckline areas at 2856 and 2822. Looking at the overnight action those are very much potentially in range today. Both daily sell signals reached target with no current positive divergence as that would require a rally that would be large enough to show up on the daily chart. 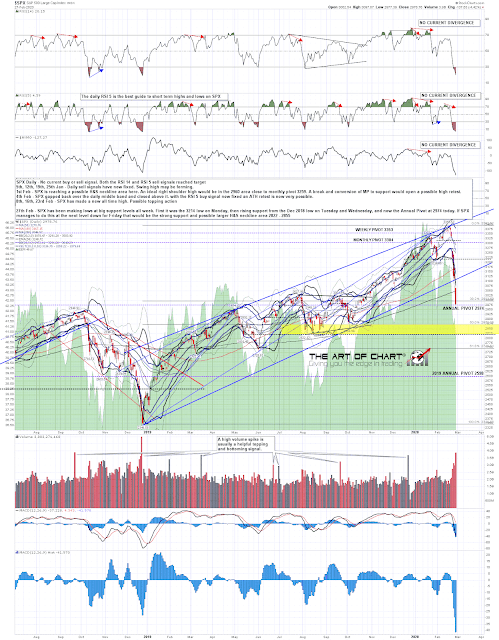 On the hourly chart positive divergence has been building for much of the week, with hourly buy signals fixing on both RSI 14 and RSI 5 on Tuesday I think. Further lower lows have been on increasing positive divergence and unless this move is going to accelerate lower, I’m expecting these to make target in a strong bear market rally starting either today or Monday. If that rally is from one of the possible H&S necklines at 2856 and 2822 then the obvious right shoulder high would be in the 3000-50 area, though I wouldn’t be at all surprised to see it go a bit higher. 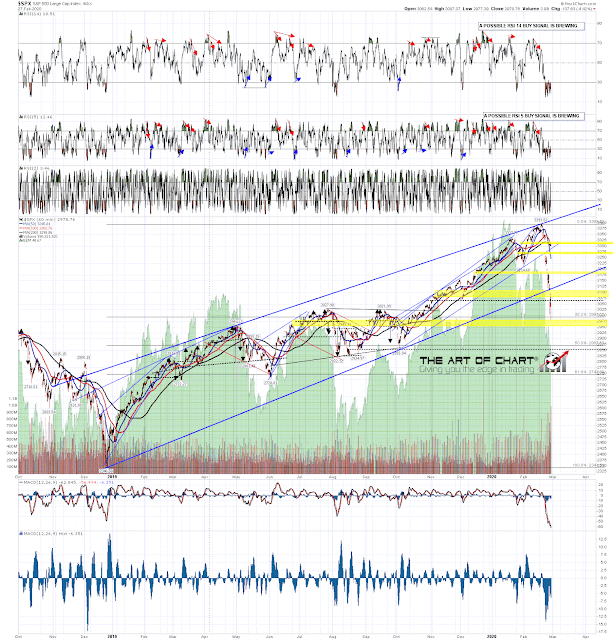 So what about the coronavirus news? Well that has been mixed this week. The good news has been that the virus looks containable in countries that are actively trying to contain it, with Singapore particularly having tested tens of thousands of people with only a few new cases in the last ten days. The bad news is that the US does not appear to be one of those countries, with the speech that Trump made on Wednesday to reassure markets that everything necessary was being done, instead seeming both to confirm that his administration has no idea of the serious risk of an outbreak in the US, and that the administration is not paying much or possibly any attention to the CDC, which is very aware of that risk. There’s an interesting analysis of Trump’s speech at CNN here. I’d been suggesting this appeared to be the case on Monday but it’s not good news at all.

Friends in the US that I’ve been talking to this week have been telling me that the US news is reporting this mainly as a foreign problem, and a friend in Texas told me that he’d heard advice this week that anyone thinking that they might be suffering from the coronavirus should go to their doctor’s office, which of course would be a good way to spread it further there. The advice here in the UK by contrast is to stay at home, call the dedicated helpline, and then if necessary be taken to one of the many dedicated coronavirus centres that have been set up nationwide to manage the problem. If there is a serious outbreak in the UK or elsewhere in Europe there seems a very good chance that it would be contained. Not so in the US so far at least.

In the US the CDC is saying that the spread of coronavirus in the US is inevitable, and that seems likely to be the case. As and when there is a significant outbreak, then I’m sure that the usual impressive US response that one would normally expect will get going, and the virus will be contained there too, but I’m concerned about the initial market reaction when that outbreak becomes obvious as that would seem likely to trigger further market declines. That is a big wild card over the next few days.

Subject to that big wild card, unless this is going to become an uncontrolled decline on markets now, I’m looking for support today at that very strong 2820-70 support range, and I’d expect to see a strong rally from there that will at least reach the 3000 area, ideally lasting at least two or three days and possibly reaching as high as the 3150-3200 area. We’ll see if I’m right about that.

We’d normally do our monthly free public Chart Chat at theartofchart.net in a week, but given that markets are looking so fragile right now we are bringing that forward to 4pm EST on Sunday. Once that has been arranged I’ll post the link on my twitter. As ever, all are welcome and we’ll be covering the usual forty to fifty instruments over the main equity index, forex, and commodity markets.