I was asked an interesting question yesterday in our monthly free public Chart Chat at theartofchart.net, and I’d like to talk a bit about that before I start looking at markets today. The question was whether, given that market prices reflect everything that is currently known at the moment about that market, then how can that price be mistaken? My reply was that if that was truly the case then the price of tulips in January 1637 (just before that bubble burst) would have been equally justifiable and that, further, if that was really true there would be no speculative bubbles, which clearly there are on a regular basis.

Something I didn’t add, and should have, is that while statements like this are often thought of as economic rules or even laws, what they are in truth is just working assumptions that contain enough truth that economic models can be built using them that will have some relevance in modelling the behaviour of a market that is infinitely more complex than that model.

There is a lot of faith in markets and this is something I’ve talked about before. I remember talking to someone years ago about gold, with my companion telling me that the problem with gold was that it was only worth what someone would pay you for it. I replied that he had just missed having an important insight, in that while what he said was true, he had missed that the same was true of anything that could be bought and sold, and also true of anything used to buy or sell it. There is no such thing as absolute value, all value is relative and based on confidence.

It reminds me of a joke that I read in the 1980s in the cult classic graphic novel ‘The Killing Joke’. The Joker tells the joke to Batman and it goes as follows:

I’ve always remembered this joke and felt that it had something interesting to say about human psychology and the impact that psychology has on our interactions with the world around us. The other thing I said in response to something else in Chart Chat yesterday was that while it was crazy in the current economic background that SPX had recovered as far as it has, it wouldn’t be a lot crazier for markets to go even higher, and that we might see that happen. Best to keep an open mind rather than to stand in front of a train which might not stop in time. We have to suspend our disbelief watching the market, just as we would while watching a film or reading a novel.

On to the markets, where I said two or three weeks ago that the main barrier to SPX retesting the early June high was the main rising megaphone resistance on NDX as if that held exactly than SPX would likely have to turn back down without that retest. NDX closed over that resistance trendline on Friday so the path has been cleared for that retest on SPX and while it may not happen, I’m thinking that the odds of seeing that are now at 50% or higher. We’ll see. 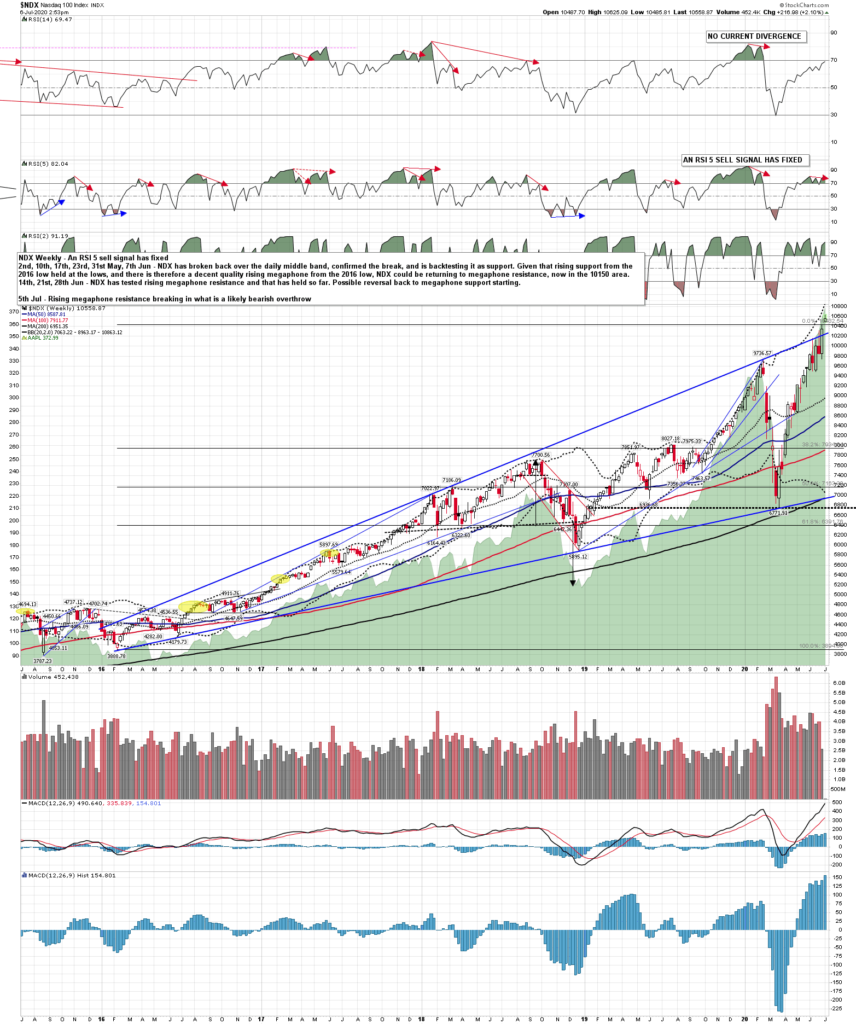 Now there is some negative divergence here. On the hourly chart there is now a possible RSI 14 sell signal brewing on SPX and we could see a turn. The main support is now well below at the daily middle band, currently in the 3107 area. SPX 60min chart: 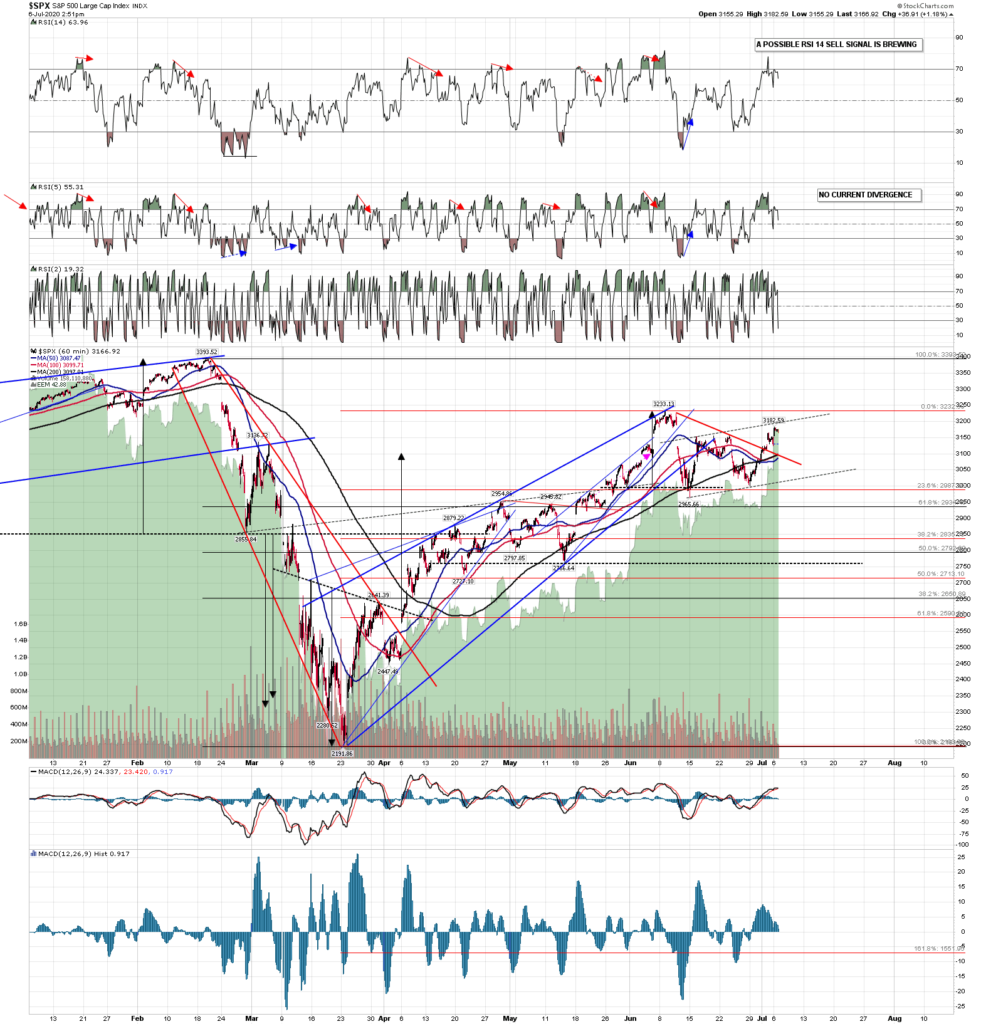 A couple of announcements today. Firstly I’d mention that today is the last day of our July 4th sale on annual memberships at theartofchart.net, and if you are interested and had not got around to pulling the trigger for that yet, you can do that here until midnight tonight I think.

Secondly Stan and I have decided to do a special webinar on the markets in the ongoing COVID economic environment. This is likely to have a huge impact over the next year or three and we will be looking at the markets, sectors and instruments that should do better or worse in this environment. This will be like the webinars we do at the end of each year and we will likely set a date for this in early August. As we approach that I’ll mention that in my posts and on my twitter.

Lastly if you missed the free public Chart Chat at theartofchart.net yesterday you can find the recording posted on our July Free Webinars page.