I was reading a very interesting article yesterday on the progress of COVID-19 and it was interesting not so much because of what was said, as for the decent quality numbers that it was quoting on COVID-19 exposures in the US population, and the fatality rate from the now decently sized statistical sample of exposed population and consequent deaths. In summary about 5% to 8% of the US population has now been exposed and are showing antibodies, and the death rate so far, subject to some likely attribution of deaths to other causes, is coming through at between 0.49% to 0.78% of those exposed. If you’d like to see the source article you can see that here.

If you haven’t seen it before I’ll be referring back to my 20th March post ‘A Short History Of Superflu Pandemics‘ and so I’m linking back to that for reference.

Now I’ve said before that I’m skeptical about an effective vaccine or cure being developed at all, and in the event that there is an effective one developed, whether it will be widely available before 2022, by which time it would likely not be a lot of use. I will be delighted to be pleasantly surprised about that, but my working assumption is that the coronavirus will just run through the population in the usual way for these pandemics and then fade away as an issue.

On that basis, though I’m seeing estimates that 70% of the population would need to be exposed to develop herd immunity, my working assumption would be that number might be as low as 33% to 40% infected in the 1889 and 1918 pandemics, ranging up to the 70% number because in the 1889 and 1918 pandemics those who were asymptomatic were likely not counted and that may, as now, have been a high proportion. On that basis 5% to 8% exposed is just a decent start, and will likely need to rise at least four or five times by the time herd immunity is established.

The death rate at 0.49% to 0.78% is much lower than appeared likely in my 20th March and so is actually good news, though if there is no vaccine or cure, and the number of exposures needs to be as high as 33% to 70% of the population, then as many as another one to two million people in the US may die of COVID-19. That would likely happen mainly over 2020 and 2021 and, given that many victims of COVID-19 are in sufficiently fragile health that they would have died in that timeframe in any case, then would likely increase the 6 million or so deaths in the US expected in any case over that period to 7 million to 7.5 million.

That’s a lot of COVID-19 deaths, but by historical standards would be a decent enough result. By those historical standards this might also be enough of a reminder that some basic preparations might be made for the next pandemic, as these do occur regularly, albeit infrequently, and it was a dispiriting moment for the ongoing search for intelligent life on earth that this pandemic caught governments all over the world so completely unprepared, despite being perhaps the most predictable natural disaster in the history of the human species in every regard except timing. 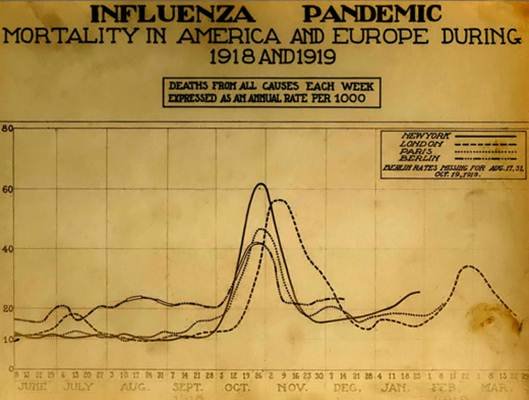 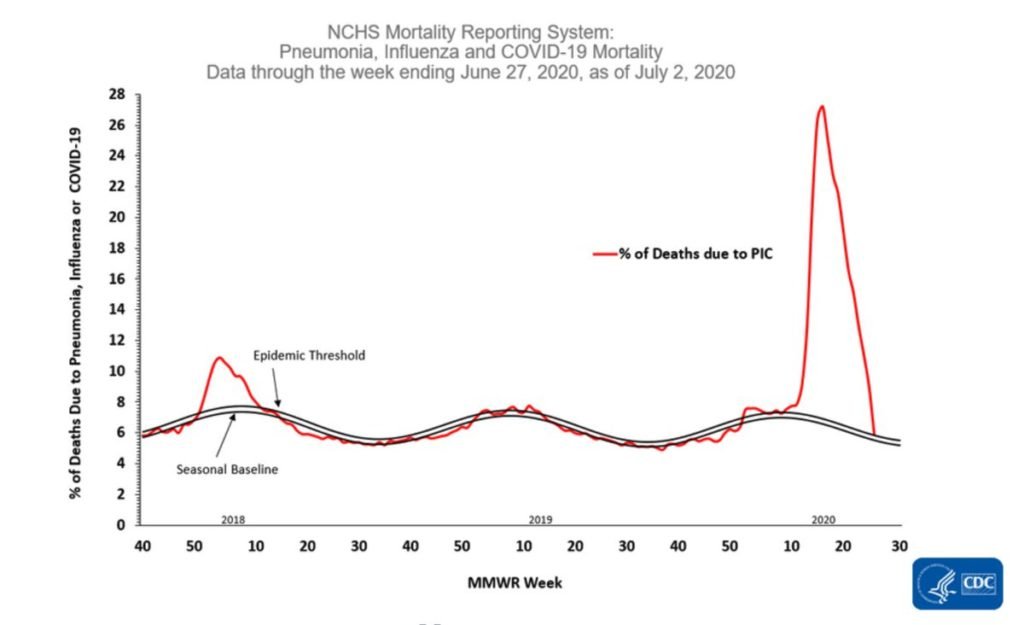 If this pandemic plays out as I’m expecting then COVID-19 will be a major issue for a while yet and the management of COVID-19 over the next year or two, having already caused major economic disruption since March, may cause much more disruption over the rest of 2020 and possibly much of 2021. Stan and I are going to be running a webinar in early August at theartofchart.net looking at investing and trading in this environment and as soon as we set a date I’ll be mentioning that on my twitter and in my posts of course.

On to the markets

SPX has been consolidating choppily for the last couple of days and this morning has come close to delivering a backtest of the daily middle band. There are three important levels of support just under 3100 and they are the daily middle band, now in the 3099 area, and the monthly and weekly pivots, at the 3099 and 3098 levels respectively. That is a lot of big support in a small area and and any break below would be potentially significant. A conversion of 3100 to resistance would open up a lot of potential downside but I won’t be getting that excited about that until we see it. 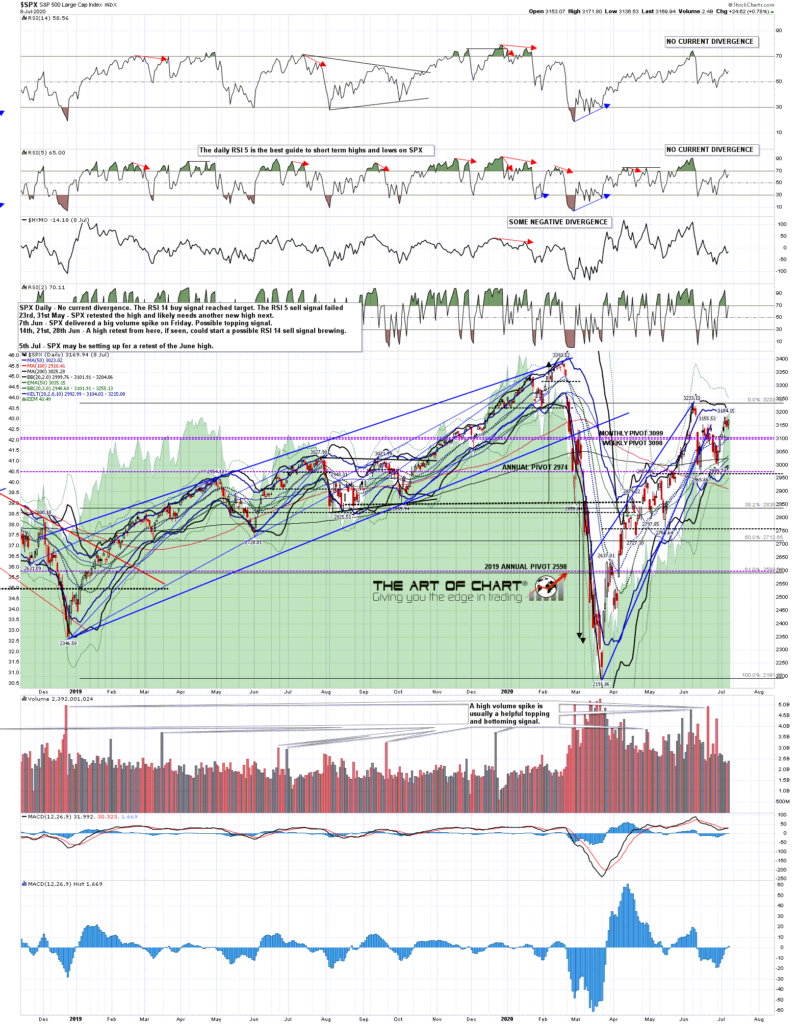 Hourly RSI 14 sell signals on both of SPX and NDX fixed earlier this week, and while the 3100 area has been backtested as expected, I’d note that neither of those signals has reached target yet, suggesting that there is likely to be at least another significant downside attempt in the near future. In the very short term there are clear bull and bear scenarios here. 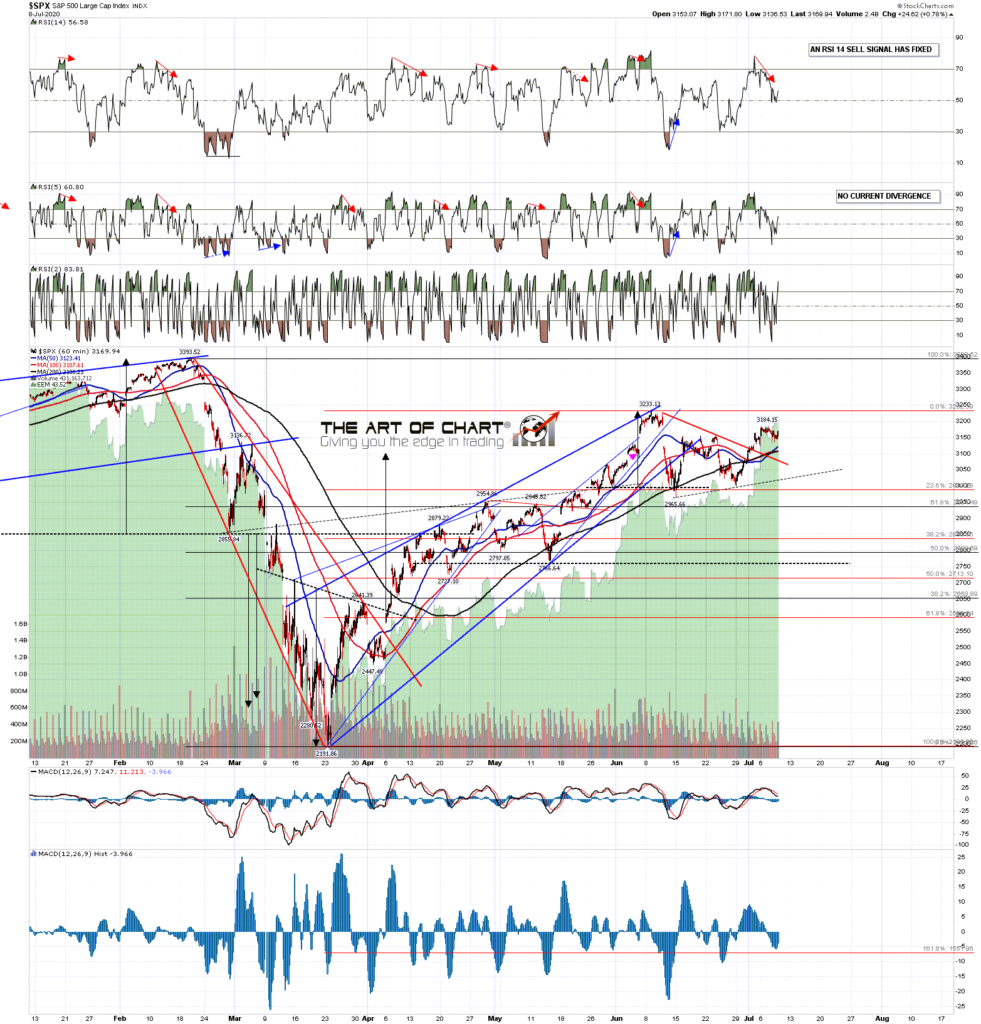 The bull scenario is shown on the SPX 5min chart below and that shows the rising wedge from the 3000 low that broke down earlier this week. The minimum 38.2% retracement target was hit almost exactly this morning and a high quality bull flag channel has formed that would look for a retest of the last high at 3184 on a break over flag resistance. 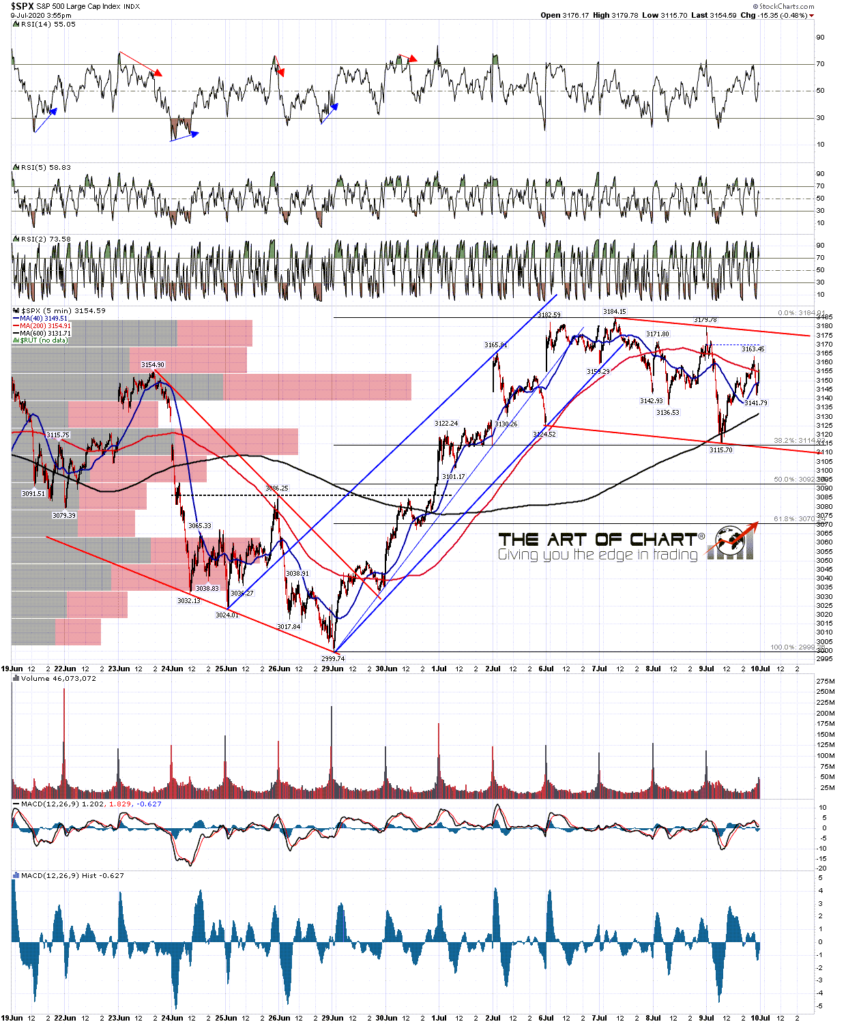 The bear scenario is shown on the ES hourly chart below, and I was outlining this possibility in my premarket video at theartofchart.net on Tuesday morning. I was talking about the possibility that ES would retrace back to the area of the possible H&S neckline at 3106, with the low this morning was at 3105, then form a right shoulder with an ideal high in the 3155 area, with the high this afternoon at 3154. This H&S is in play and on a sustained break back below 3105 overnight or tomorrow the H&S target would be in the 3026 area. 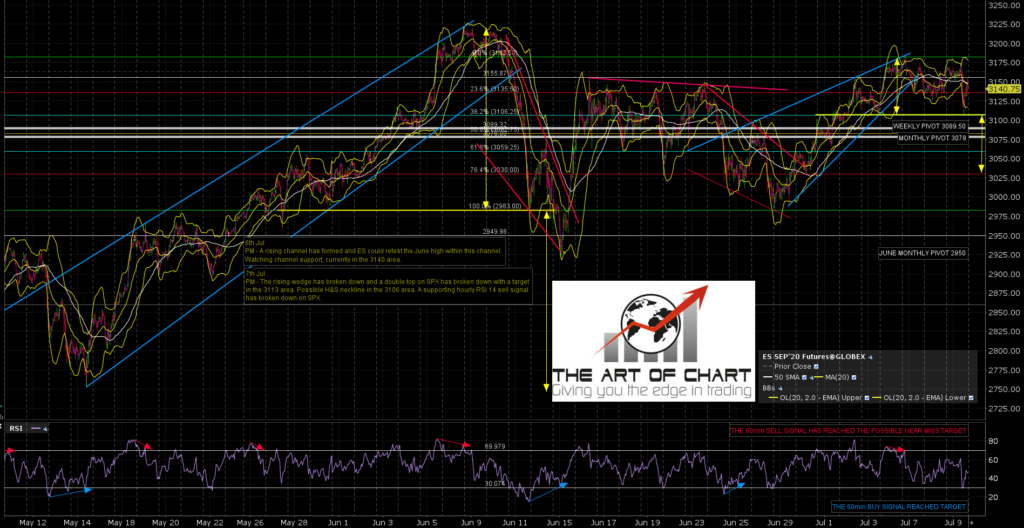 Which of these scenarios looks more likely? Well I think the bearish scenario is better one overall so all things being equal I’d give that 70% on the setup quality. All things haven’t been looking that equal in recent months however, and the bulls have certainly earned the benefit of the doubt of late, so I’m giving both options equal weight for the moment and watching key levels. The key level on the upside is 3155 ES. A conversion of that to support tips this to the bulls with a likely retest of 3184 ES after that and a possible retest of the June highs. A break below 3100 SPX from here would likely tip this to the bears, subject to conversion of the 3100 SPX area to resistance, and would open a possible move down to a bigger picture target in the 2880 SPX area next month.

A couple of things to mention today. We are running another Traders Boot Camp at theartofchart.net starting on 3rd August teaching technical analysis and trading skills. These are mainly aimed at existing subscribers but are open to all and are comprehensive, include a lot of useful trading tools, and very cheap relative to an equivalent courses that I have seen online. If you are interested you can read more about that here.

The last thing to mention is that our Paragon Options Service trading options on futures and ETFs is up about 82% so far this year and has just closed a sixth green trade in a row. If you’re interested we offer a 30 day free trial and you can read more about that here.

I’m planning a post tomorrow looking at the progress of the tech bubble this year and that gap that has been increasing between tech stocks and other stocks in US markets.