Well I tried to talk about face masks and COVID-19 in my last post and that was my least popular post in years. I would note from the responses that wearing a mask is primarily for the protection of others from those infected with COVID-19, so wearing one is not so much a matter of personal courage as consideration for others. In response to a couple of questions I was asked I would also add that I’m happy to say that I am in a low risk age group, and that the only member of my family in a high risk group has already had and survived the virus so personally I’m not too concerned. Be all that as it may it seems that I should abandon trying to talk about COVID-19 until after the presidential election.

In the meantime, and on the theme of otherwise mundane objects attaining a strange symbolic significance I have a lovely little clip from Blackadder Series 4 to share with one of my favorite ever comedy monologues on the origins of British humor from a german perspective. That part is from 55 to 90 seconds in but the rest of the clip is also excellent. Enjoy 🙂

On to the markets where last week SPX broke back over the daily middle band and converted it to support, and may be on the way back to a retest of the all time high, but there is a significant hurdle on the way at the same time that SPX is testing the daily upper band, currently at 3438, with the high today at the time of writing at 3444. The daily RSI 5 buy signal has reached target. 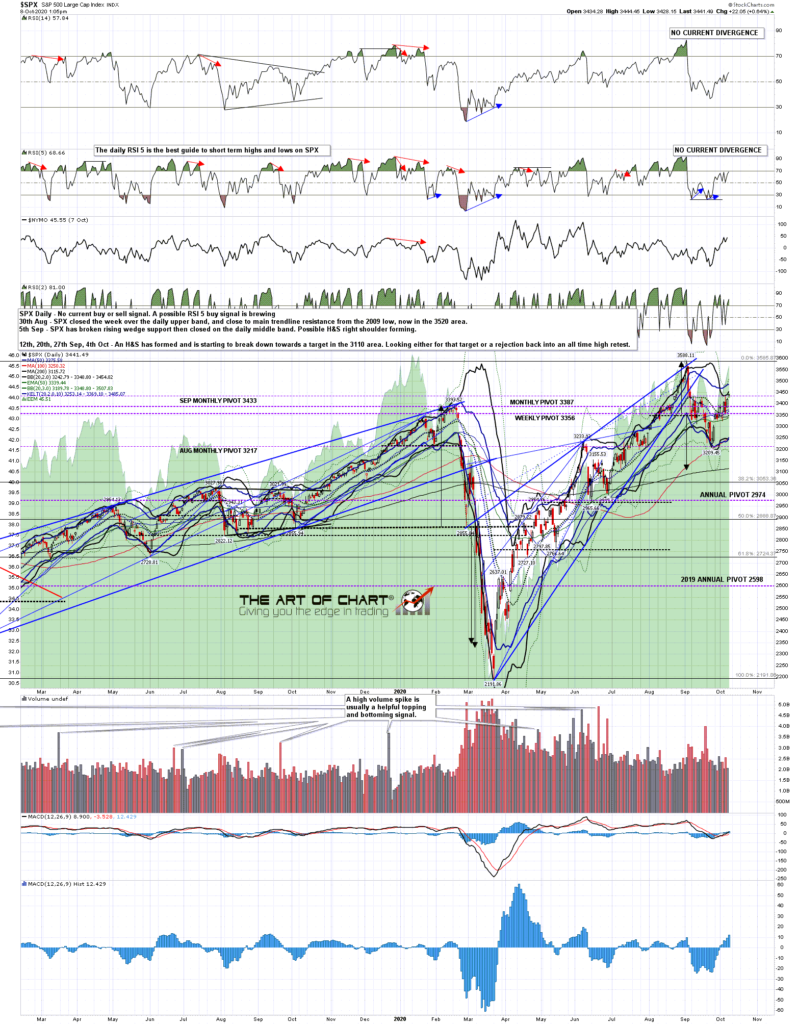 On the 15min chart you can see that SPX has reached both the alternate double bottom targets that I was looking at a week ago, and with the kind assistance of President Trump and twitter on Tuesday night (77 point decline on tweet that stimulus negotiations delayed until after the election), and Wednesday morning (complete reversal on tweet that stimulus negotiations back on again), the right shoulder formed on a decent quality IHS that has now broken up with a target at a retest of the all time high.

As ever with these patterns there are now two likely outcomes, and the chances are that we will see one of those play out. Either that IHS heads to the target, or we see a fail soon that delivers a retest of the retracement low at 3209.45, and likely at least somewhat lower. At this stage the H&S setup looking for the 3110 area has already failed of course, though the 200dma is still in that area, currently at 3116.

If we are going to see a fail then that could be from here, as the obvious rising wedge resistance trendline from that low has now been tested though I’d be leaning a bit higher based on the NDX chart, which I’ll be coming to. If SPX should break below wedge support, currently in the 3380 area, that would be a significant sign of weakness, and a break below the right shoulder low at 3354.54 would invalidate the IHS. Main support is at the daily middle band, currently 3349, which would need to be broken and converted to resistance to open the downside. 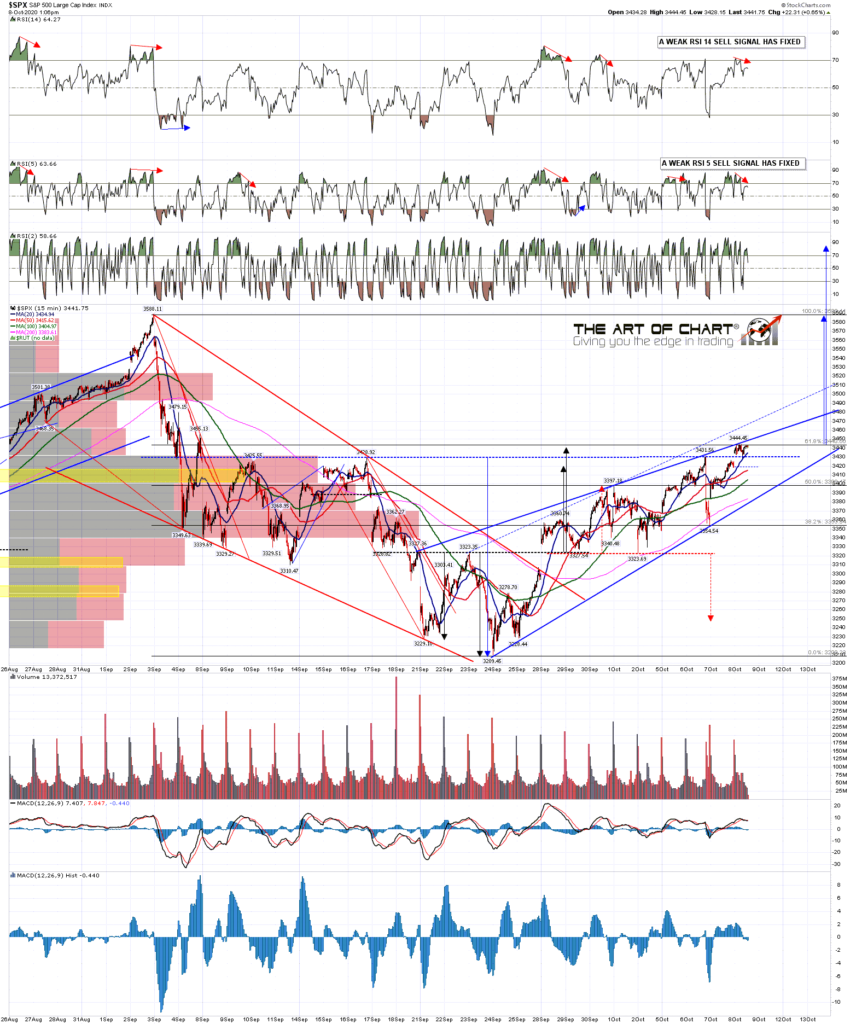 On the NDX daily chart the RSI 5 buy signal reached target and on a retest of the last high at 11606 a possible RSI 5 sell signal would start brewing, but the main pattern setup is on the 15min chart: 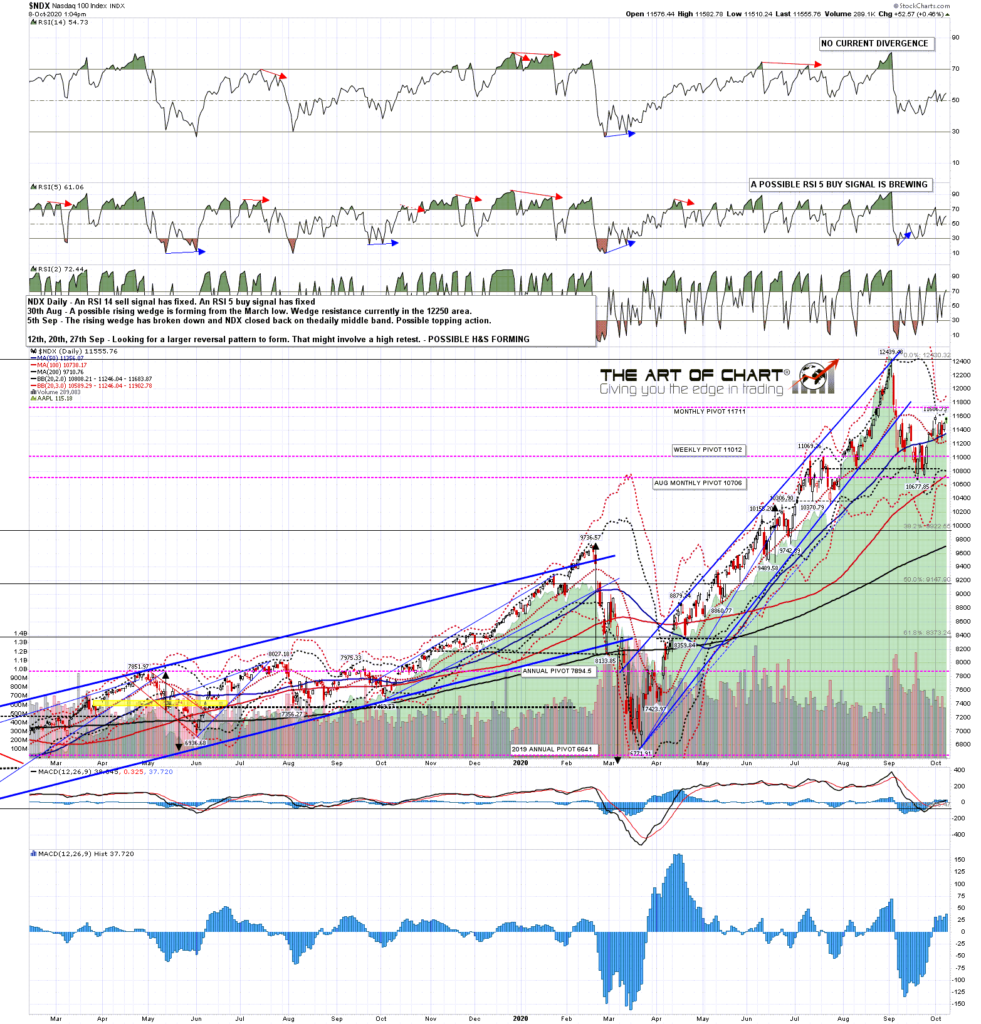 The setup on NDX important because more than any other index I think NDX is driving the equities bus here, and it is notable that on this current leg up NDX has been lagging. The setup here is similar to the setup on SPX except that the pattern from the low is a clear rising channel which would make an excellent bear flag channel.  There is also an IHS forming that has not yet broken up. A sustained break above the IHS neckline in the 11620 area would look for another all time high retest, and usually we would at minimum see that IHS break up even in the event of a subsequent fail. If we see that break up and then the channel breaks down then the odds are decent that NDX will be on the way back to the lows, though the IHS would not be invalidated until a move below the IHS right shoulder low at 11225.20. 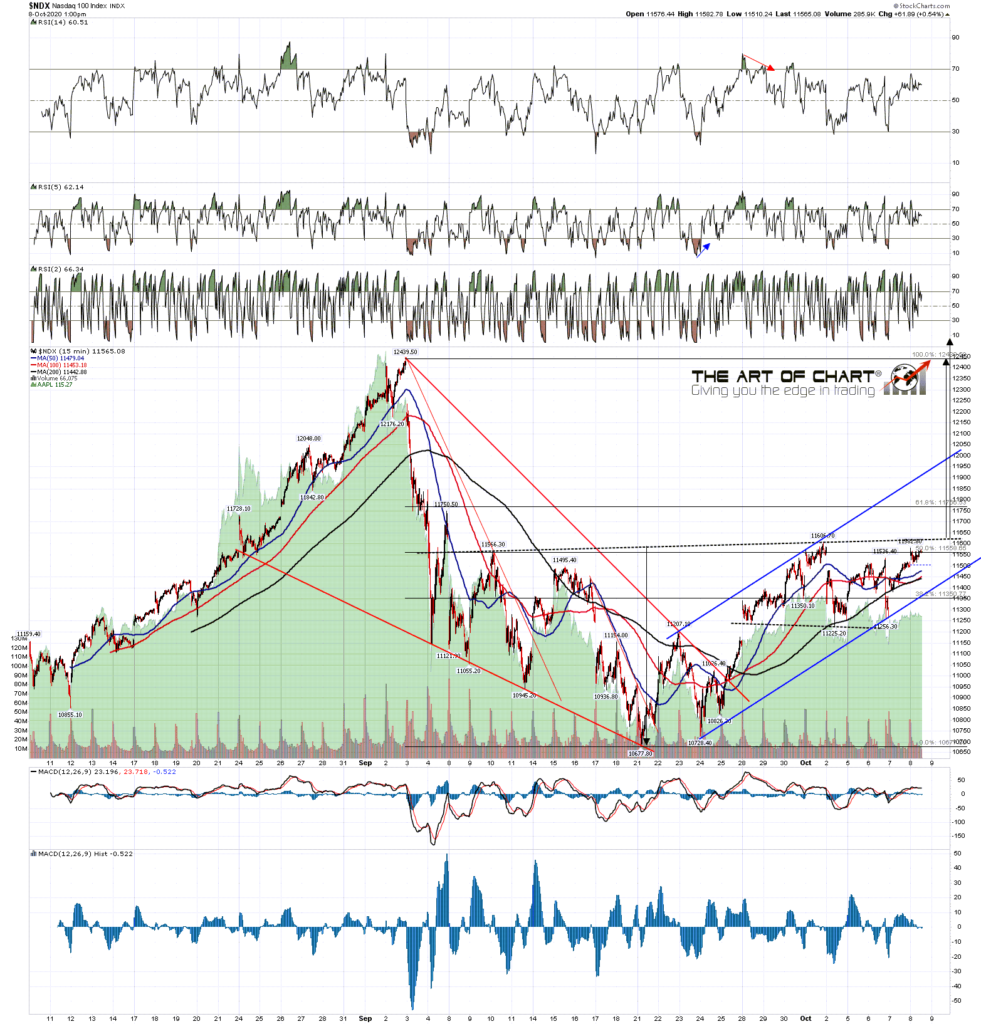 If we see a firm break up from here then I’d expect all time high retests on SPX and NDX, but in the meantime there is a decent possible setup for a fail here.

If you aren’t already aware, access to the Chart Chat service and educational video library at theartofchart.net is free this week but only until the close on Sunday. Check those out if you’re interested. We did a Chart Chat video yesterday and will do the next one on Sunday, and there are a lot of excellent educational videos that we have recorded over the last five years in the library. Worth a look IMO.