The Weekly Call provides perspective on high quality setups and trading strategies for the coming week. The purpose of this blog is to demonstrate how to swing trade futures using our methodology to select high quality setups and manage the trade with our risk management approach. This week we manage our trades in Wheat, Cocoa, Coffee, Sugar and plan to enter Silver.

Our goal in this blog is to generate a 200% return in less than a year by swing trading futures that are not part of our regular service. Our track record is now posted below under Completed Trades. See some of our completed trade videos below.

3-12 – We are waiting on support and Wheat has yet to demonstrate any. $438 needs to hold or our long has a good chance of getting stopped out. Our stop is at even and we are 1/3 in profit waiting on the decision that price will make this week. There is risk to $421.

3-19 – As mentioned last week, a break of support was possible and we might be stopped out of the trade. We have been stopped out with 1/3 of our position in profit. We took additional risk by not taking another 1/3 off in profit at 470s on the three up per our risk management rules. My thinking here was to take the additional risk as the setup of the expanding diagonal looked promising. Another valuable lesson in sticking to a system of managing risk to minimize losses and maximize returns.

We are now looking for the 421 area for a reversal pattern and another entry this week. We still like Wheat long as this is the area for a 18 month cycle low. Follow along during the week on twitter by following HERE.

3-26 – As mentioned last week we were looking for the 421 area and we tweeted out an entry last week. We are long and waiting to take 1/3 in profit and move stops to even at 430 or the declining resistance trendline. Our stop is currently at 417. Nice positive divergence and looking for higher prices into mid-May.

4-2 – As per last weeks tweet we took off 1/3 of the position in profit at the upper declining resistance trendline and left our stop below the trendline. Anytime you take a profit you have the choice to bank it and place your stop at even or you can lower your stop to create room in the trade equal to the profit taken. This is an option that I use rarely when I want a little more space in an uncertain pattern. Wheat has turned for at least a bounce into $450. Key inflection point $450, Wheat still has downsize risk to $380.

Another Coffee trade is presenting itself. We are in the low window and have risk to 141.35 and expect an entry this week. We are looking for two different types of entries. First a move to 141.35ish and then a higher low. Either is a good entry depending on your tolerance for risk. The second entry is a conversion of monthly pivot to support at 146.95. Either will work so we will be watching for an entry. Follow along on twitter here to see our entry.

3-19 – We have been stopped out again – second time in a row. Granted the losses are small in comparison to the gains we have had in Coffee. My trading rules are clear entering a new position: if you are stopped out three times, even when you get stopped out at even, go find another trade. This forces me to plan my next entry more carefully so my next entry will be less aggressive. At this point I will wait for a larger reversal structure and a possible test of $138.05.

3-26 – We have broken down in Coffee and are looking for roughly the $135 area for a possible three down reversal. The inverted head and shoulders broke down and we are looking for a larger double bottom next. Timing windows favor a turn in the next week. We will be tweeting out the entry if we see a reversal pattern. Follow along during the week on twitter by following HERE.

We entered a trade last week in sugar which we have been discussing on the Daily Update. We have been tracking a flat from January 19th and we have positive divergence on RSI. The three down in Sugar measures to $18.00 which is where we found support last week. There is currently risk lower to $17.56. This appears to be a double bottom setup and we are targeting the $21-22 area by the end of March. We tweeted out the entry last week on Thursday with a stop at 17.80. So far the trade is positive. We plan to take 1/3 profit 50% back of the previous swing and place our stop at even. If we break 17.80 this week we will stand aside and wait on the next setup lower.

3-19 – Last week we recognized a triangle forming on Sugar and tweeted out to exit 1/3 of the trade to lock in small profits and place our stop at even as the triangle is a continuation pattern that had the possibility to make a new low. This is a risk management practice which I use often. If the trade is not going out as planned, protect your mental capital and invested capital. On Friday, the triangle resolved lower and we have been stopped out of 2/3s of our position at even. We take a small profit and move on. At this point, we will stand aside on Sugar and wait for a better setup.

3-26 – We tweeted out the entry last week to get long sugar on Wednesday on the touch of the declining support trendline at 17.11. So far we are off 1/3 of the trade as we are 50% back the previous swing and our stop is at even. We are looking for a rally up into the 19.50 area by April 20th.

4-2 – Sugar has reversed and we have been stopped out. We have 2 small profits so far but are still looking for a larger swing higher. We will be looking for the next reversal pattern and tweeting out our next entry. We are watching for a break of the declining resistance trendline.

We were hunting an 18 month cycle low in Cocoa – this is a very volatile commodity and we suggest trading this only if you are experienced in commodities and risk management. There is a likelihood that this low cycle can initiate a change in trend for this commodity.

3-5 – Last week we were stopped out as the triangle formation broke down. We re-entered at the low with divergence at 1893. We look to exit 1/3 of the trade on Monday as we are 50% back the previous swing. We will move our stop to even and expect a back test into the 1917 area.

3-12 – Last week on Monday we exited 1/3 of the trade with profit at 1961 and placed our stop at even per the instructions above. Later in the week we were stopped out. We take away another 1/3 in profit and are waiting on the next setup to try again. 1876 may be a double bottom low and our stop system may have forced us to exit prematurely. In my experience there is always another chance to enter higher so risk management comes first. We like Cocoa long here as this is an 18 month timing cycle low. Commercials are also long here so we want to be long with them. We will wait for the retrace to form another reversal pattern and will tweet out the entry later this week. Follow along during the week on twitter by following HERE.

3-19 and 3-26 – So far on Cocoa, we have three entry attempts and have taken 1/3 in profit on each attempt. We are hunting an 18 month cycle low which appears Cocoa may have just completed. It appears that Cocoa has enough separation from the lows and commercial longs are larger than commercial shorts. We have hit our high window and are looking to re-enter long on the next pullback.

As mentioned last week, we are waiting on a reversal pattern for the next entry. This week we may see that possibility at 2030, the 50% back area. We will be tweeting out the entry later this week. Follow along during the week on twitter by following HERE.

4-2 – We have initiated a 1/2 size position at 2088 in Cocoa and are managing risk using size instead of using stops. The 18 month cycle has printed on Cocoa so we have some confidence the low in now in. We will add to our position if 2030 is seen.

We have been looking at an entry in Gold last week on the Daily Update and so far the trade is working. This week we want to watch for a longer term setup in Silver for a swing into Mid-April. We are looking for a reversal pattern in the 1707 area.

Silver appears to have made a 40 week timing cycle low on 12/20/2016. We captured a long in metals on Gold on the first impulse up and exited on 2/8/2017 with the last 1/3 of the trade capturing 94 handles. We do not believe in counter trend swing trading unless it is a move of a month or more. We have been patiently waiting on this backtest in metals to enter long.

We are now at the point to re-enter long into metals and the reversal pattern we may see Monday on Silver. We have backtested in Silver into the 1692 area with a low 40 day timing cycle and are expecting higher prices into Mid-April. We are looking for the three down to complete at 1707 or so for an entry. We will tweet out our entry early this week if the reversal pattern presents itself.

3-26 & 4-2  – We did not see the setup mentioned last week so we are waiting on the backtest and looking for an entry. High cycles look good into the 20th of April. Looking for a test of 1758 or 1776s. We will be tweeting out the entry this week if seen.

Have a GREAT trading week!!!

The purpose of this blog is to demonstrate how to swing trade futures using our methodology to select high quality setups and manage the trade with our risk management approach. This track record is based on entries and exits as posted in this blog using a $50,000 account limited to a three contract position size. We will increase position size after we generate a 200% return. See the videos below for more information. 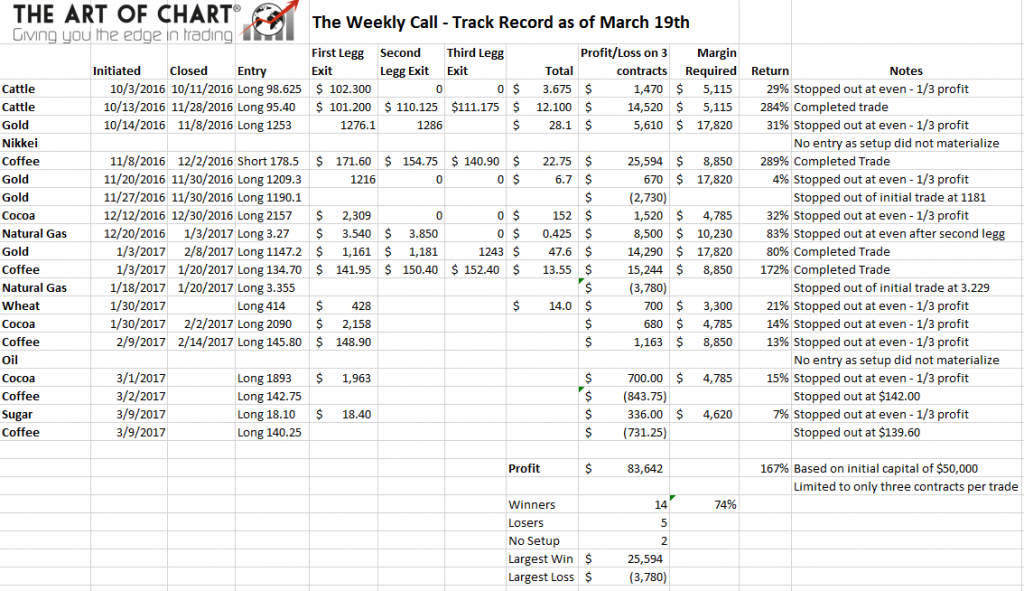 Completed trade in Cattle as of November 28th

We expect subscribers to have captured 60% of the swing in Live Cattle which is over $14,500 in profit using a margin of only $5,115. A great example of using leverage in futures.

Completed Trade in Coffee as of December 12th

Completed Trade in Natural Gas as of January 2nd

We were stopped out of out last 1/3 position as weather related news created a gap down on January 2nd and a possible flat with support at 3.196. This concludes our trade with Natural Gas, we exit with 550 ticks on 2/3s of a position with $8,500 in profit.

Completed Trade in Coffee as of January 19th

Completed Trade in Gold as of February 8th

We exited the Gold trade on February 8th with over $14,000 in profit. We entered on January 3rd and held the trade into the high window. We will re-enter Gold in a few weeks after a back test.