I posted the key declining resistance levels on SPX and ES on my Twitter this morning and they were in the 2662 and 2670 areas respectively. The break above today opens a possible retest of last week’s highs and maybe higher.

There is still a decent amount of resistance to be negotiated above, but in the event that SPX rallies back over 2700, the obvious expectation would be a retest of last week’s high, and very possibly a test of the triangle resistance that wasn’t reached last week. That resistance is now in the 2728 area. If seen that wouldn’t be likely to be the second high of a double top, and the retracement between the highs retraced more than 61.8% of the previous move. That would be the next key resistance area, however, and a break above it could open a retest of the all-time high, though that would be unexpectedly early. SPX 60min chart: 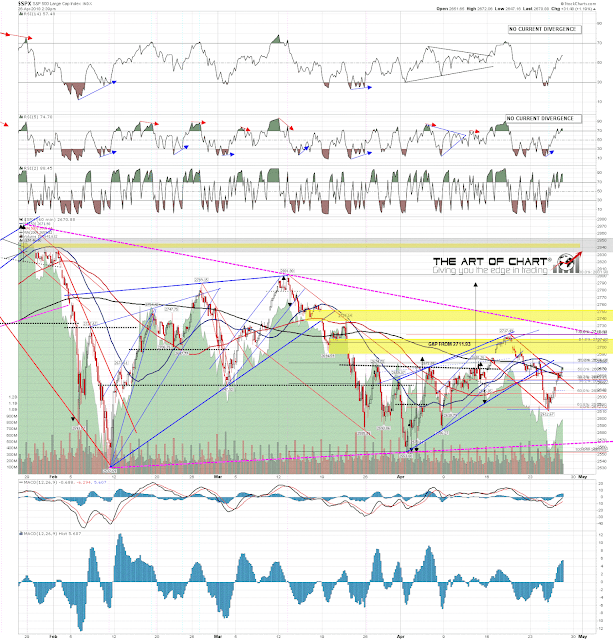 Stan and I are doing a free public webinar 30 minutes after the close tonight entitled “Turn Around Your Trading, Part 3” on turning TA into profitable trades. If you’d like to attend, you can register for that on our April Free Webinars page. Stan and Suz will be following that with another webinar on option premium capture, and registration for that is on the same page.

I’ve mentioned a couple of times in the last few months that we are developing a new options service doing directional trades based on the futures and forex instruments that we cover. We are planning to launch that in June and are now in the pre-launch period. Weekly posts will be done on our blog about that every week and if you’re interested you can see the introduction post for that here.