In my last couple of posts I was writing about the rally scenarios on SPX and was saying that the recent lower high on SPX increased the chance that the retracement from that high was to finish forming a bull flag that would then break up into a minimum target at a retest of the rally high. The close last Friday back over the daily middle band was a pointer that SPX might be breaking back up, and that has followed through into a retest of the rally high, so that bull flag has broken up and played out. So where does that leave SPX now?

Well the first thing to say here is that the economic situation is not improving. The chart below is the Atlanta fed GDP forecast for Q2 2020 and at the moment that is looking like an expected Q2 2020 GDP in the -32% area. That is dire and it would be tempting to say that it is just deranged to think that stocks can head much higher in this environment. That said though, making money on stocks using economic fundamentals analysis has always been a chancy business and, while new all time highs directly from here look very ambitious, we could well see SPX go a bit higher before economic gravity drags SPX down to the lower lows that history strongly suggests will be coming in the next few months. 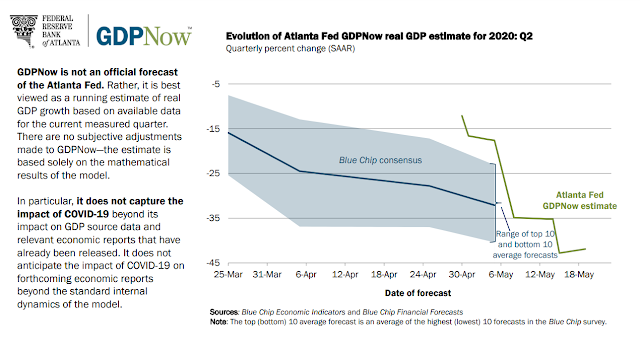 On the bigger picture the main resistance at this current inflection point is the SPX weekly middle band. That’s currently in the 2960 area, backstopped by the 50 week MA in the 2998 area, and to go higher SPX bulls need to break the weekly middle band on a weekly closing basis, convert that to support, and then head to the then open higher target area around 3100. 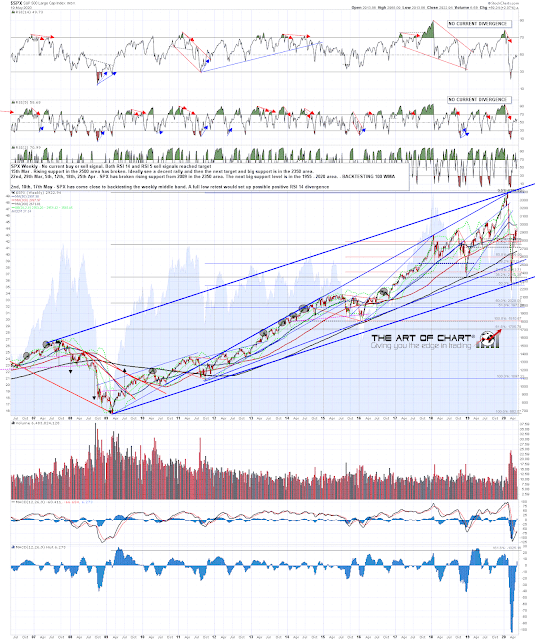 On the NDX weekly chart that conversion was done weeks ago of course and as I’ve noted previously, the next obvious target on NDX is either a retest of the all time high, or a little higher into rising megaphone resistance currently in the 10,150 area. 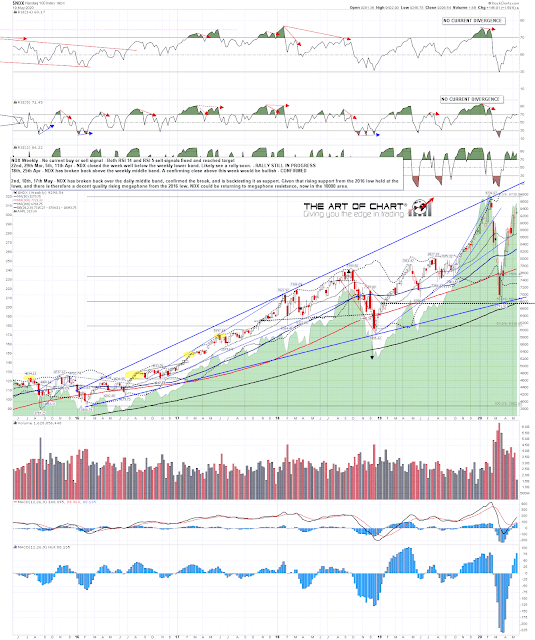 Supporting that higher target area on SPX is also the perfect rising channel that was established from the March lows at the lows last week. That channel support is now in the 2820 area and rising at about fifteen handles per day. That support would have to break to open the downside. 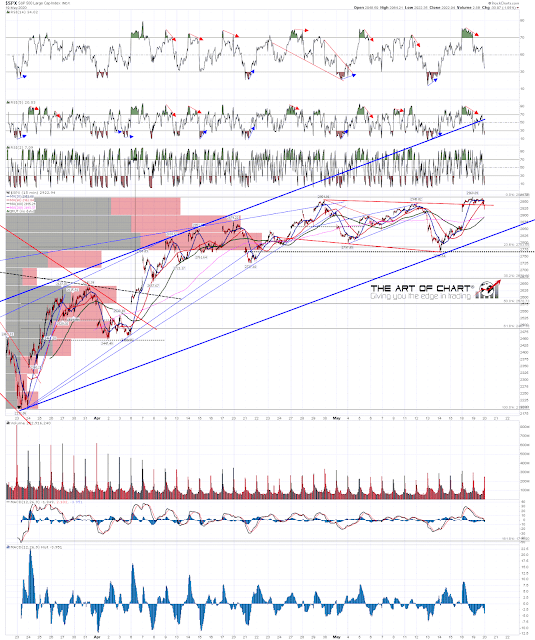 On the SPX hourly chart a retest of this week’s high would set up negative divergence on the RSI 14 and that might deliver either a full reversal or just a larger retracement than the one we saw yesterday. The support for that retracement would be the 50 hour MA, currently in the 2890 area, the 5dma, currently in the 2882 area, and the daily middle band, currently in the 2872 area. That 2872-90 range should hold on a simple retracement and, if broken, bears would need to confirm the break with a break of SPX rising channel support. 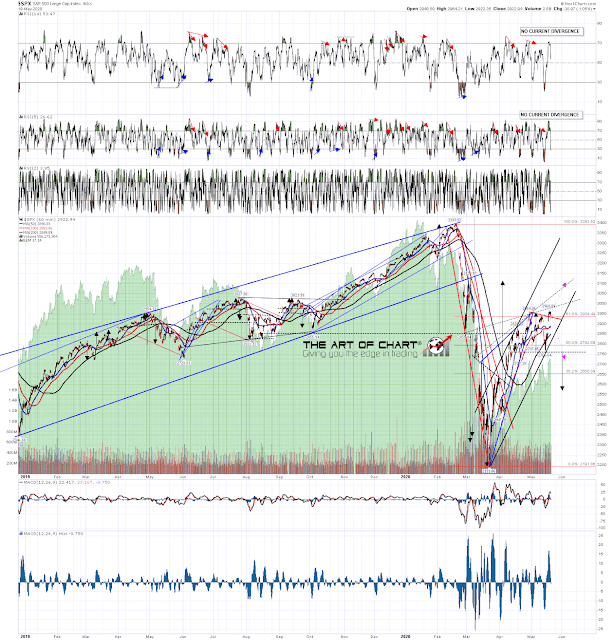 In terms of resistance, if we are going to see a reversal before a break up towards 3100 then I’d expect to see 3000 hold as resistance until then. The fixed sell signals currently on ES, NQ, RTY, YM, DAX & ESTX50 area are supporting that retracement so I’d be surprised to see that break up over 3000 before that larger retracement. Overall I think the odds to a test close to the 3100 area before we see a rally high are now about 60%, with 40% odds on a hard fail under 3000.

Stan and I are doing a webinar an hour after the close on Thursday at theartofchart.net on FAANG stocks and key sectors.  If you’d like to attend then you can register for that on our May Free Webinars page.