For some reason, Thanksgiving never made it as a national holiday in the UK, possibly because England was feeling a little sour after only winning a nonetheless hard-won second place in The War Of Independence, but I certainly always enjoy it, and various branches of my family have had a long and storied history with the US over the last few centuries, so I feel that I am a sort of  honorary American. Some of those were descended from my great (x) grandfather Stephanus Van Cortlandt, who became the first native-born mayor of New York in 1667, born in the city when it was still called New Amsterdam. On another branch of my family tree, the lyrics of The Spar Spangled Banner were written by Francis Scott Key while a prisoner on the flagship of my great great great great grandfather Vice Admiral Sir Alexander Cochrane in 1814. The White House is called the White House because it was repainted white after being captured and burned by troops under Admiral Cochrane’s command in the war of 1812. Interesting days for all I’m sure… unlike the remainder of this week, most likely.  🙂

On Monday, I was looking at the seven-week bull flag megaphone on RUT and that broke up yesterday into the minimum flag target at the full retest of the all-time high. At the same time, both SPX and NDX made new all-time highs. So what now?

Well, the stats do not favor the bears for what remains of this week, the dog end of today and the half day on Friday, and as I mentioned on Monday, the only remaining two days with a significant bearish lean in 2017 are the last trading day of November and December.

That said, this is obviously a possible double top setup on RUT, and an RSI 5 sell signal has fixed on the hourly chart, with an RSI 14 sell signal brewing. I’m doubtful about a significant high but RUT could well deliver a modest retracement over the remainder of the week. RUT 60min chart: 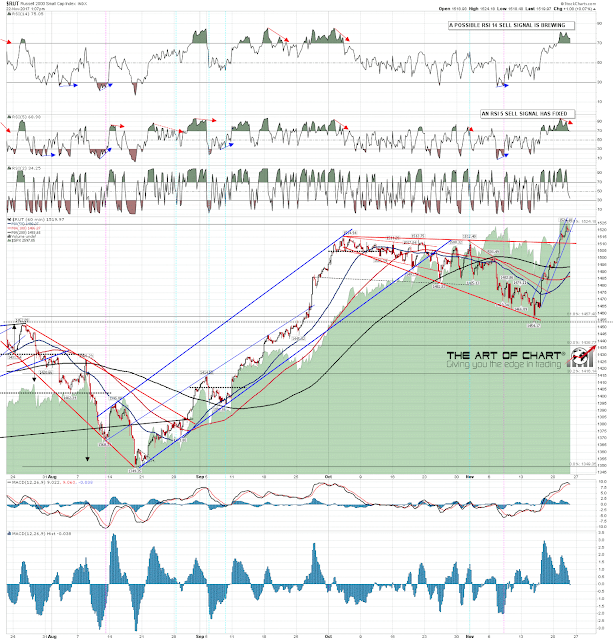 On the SPX hourly chart, there is a decent rising wedge forming from 2557.45 and the next obvious target would be wedge support, currently in the 2593/4 area. SPX 60min chart: 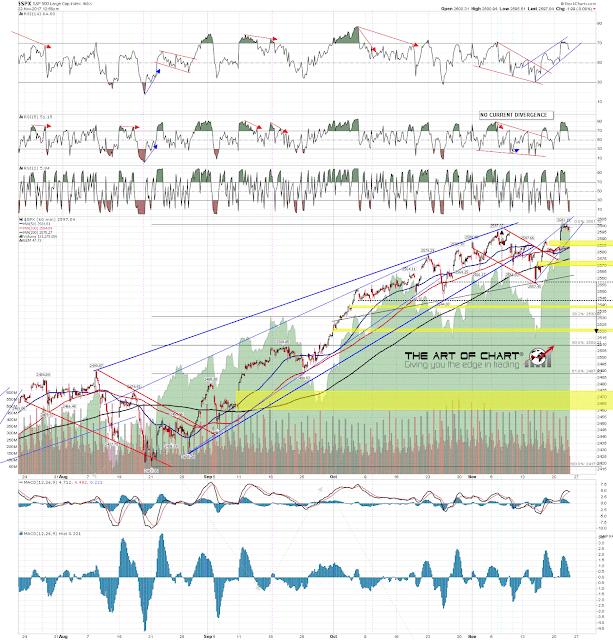 On the daily SPX chart, I’d note that the new all-time highs are retesting the decent wedge resistance trendline from the early 2016 low. Obviously, this is a decent potential resistance area. SPX daily chart: 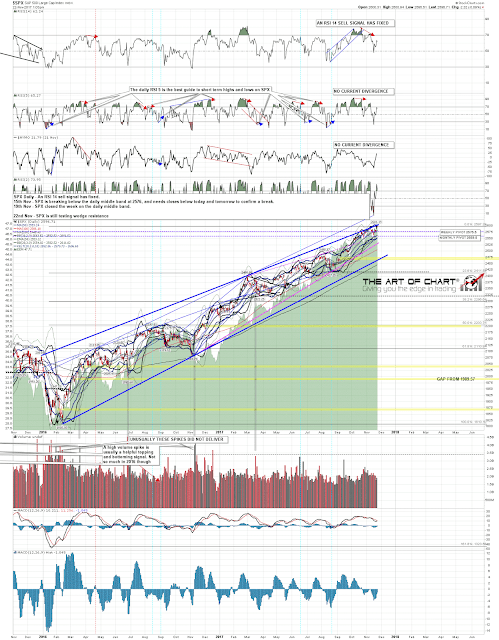 I’m doubtful about bears managing anything of significance over the remainder of this week, but there’s a lot of resistance here and close above. It may well be that nothing of any interest is going to happen on equities until next week now.

We are running a Black Friday sale at theartofchart.net through this week with 20% off the usual prices for annual memberships. If you’re interested then the coupon code is BlackFriday. If you’d just like to see some amazing testimonials, just scroll down the homepage.