Stan and I are doing our monthly free public Chart Chat at theartofchart.net at 4 p.m. EST on Sunday. We’ll be looking at the usual wide range of equity indices, bonds, precious metals, energies, and commodities and if you’d like to attend you can register for that on our December Free Webinars page.

After the spike up at the start of the week, I noted the clear break over the previous wedge resistance on SPX and mentioned that the next decent candidate trendline was in the 2650 area. That was a slightly low estimate as that trendline was tested at the high yesterday at 2657.74, rather sooner than I was expected. At the first test, SPX has rejected it. SPX daily chart: 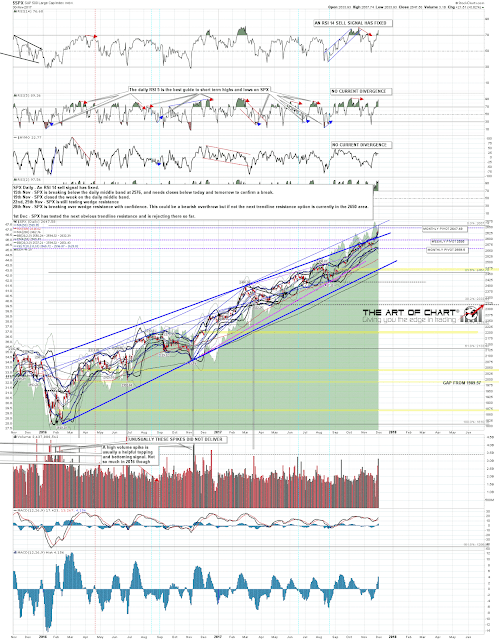 So where does that leave SPX/ES? Well, my confidence in the bears has rarely been lower than it is here at the start of a historically bullish month at the end of a very bullish year, but that is a potentially significant trendline resistance test and I’m watching this with interest.

On ES the rising channel I was looking at in the short video on Wednesday was resistance at the first highs yesterday morning, then broke up, and broken channel resistance was support in the afternoon after the rejection from the high. A small rising megaphone formed on that move and broke down overnight. This looks like a possible short-term high, and a topping pattern may be forming, and I’m wondering about a retest of yesterday’s high today or Monday to make the second high of a modest double top. ES Dec 60min chart: 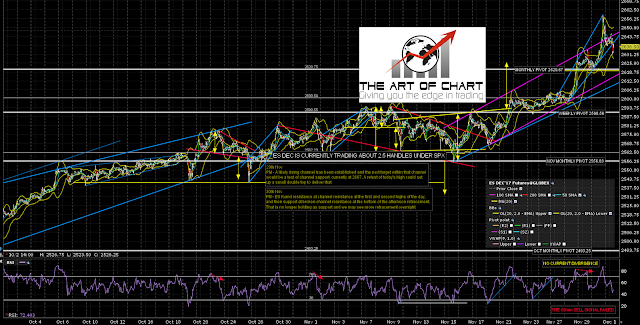 While ES and TF have been making new all-time highs NQ has very weak, and yesterday NQ was rallying from a hard decline the day before. That rally has found resistance so far at the weekly pivot at 6374. If that continues to hold as resistance today then NQ should start another leg down into the 6200 – 30 area. If it breaks and converts to support then the obvious target would be a retest of the all-time high. NQ Dec 60min chart: 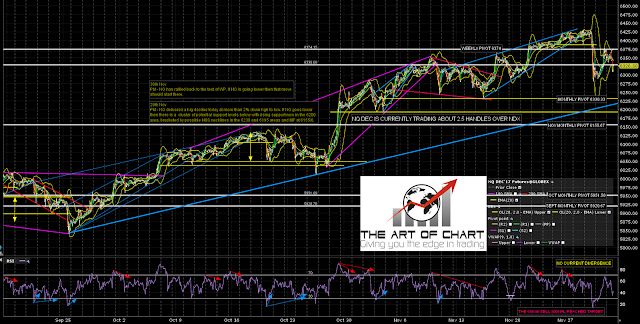 On TF a clear rising wedge has formed from the November low and broke down overnight. There is already an open target in the 1522 area from an only middling quality H&S, but if equities have a strong day today then TF could retest the high to make the second high of a small double top. TF Dec 60min chart: 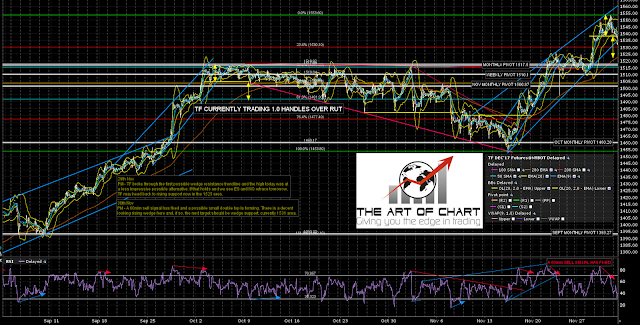 The historical stats for December are firmly bullish, but the stats today are only neutral. The overall setup leans bearish but we may well need high retests first, and it’s worth remembering how many bearish leaning setups have failed in 2017 to date. Everyone have a great weekend. 🙂