……… While You Are Busy Making Other Plans – Allen Saunders

The high this morning was low, not retesting the globex high on ES and not setting any decent hourly sell signals brewing. 2716 was then slowly converted to resistance, a process requiring a break of the level, a backtest that holds that level and then continuation in the direction of the break, but then ES found support at the weekly pivot at 2709, rejected back over 2716, reconverted that to support and continued up. This has more or less eliminated the possibility of seeing a rejection candle today, subject to presidential comments of course,

The next obvious target is a retest of the globex high on ES at 2734.5 and at that stage we will have serious possible hourly sell signals brewing. Then we see if 2735-40 resistance holds. If it does then the next move down should be a strong one. A break and conversion of 2740 opens the door to a retest of the rally high, and possible second high of a double top there.

The bears’ chances here would have been better with that test this morning and a fail there. I’m keeping an open mind.

Intraday Video from theartofchart.net – Update on ES, NQ and TF:

I have drawn in three possible falling channel resistance trendlines on SPX that might be a high for this move. SPX 60min chart: 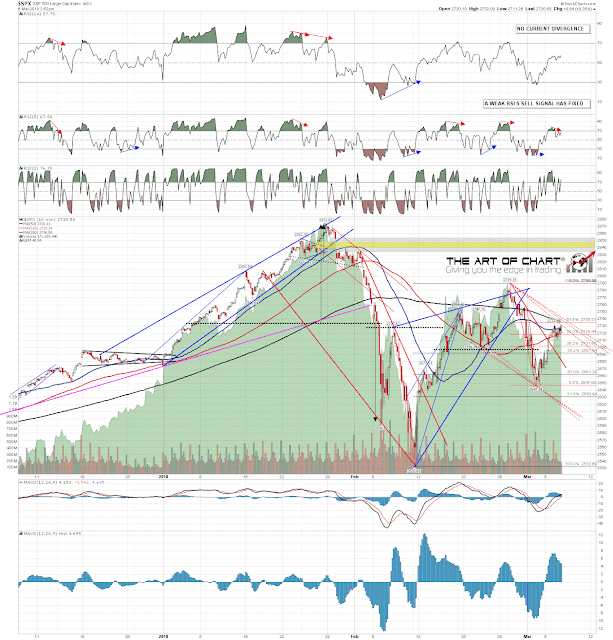