One way of looking at markets is as a succession of inflection points or probability forks, at which there are generally a higher and lower probability option which, once taken, take the markets to the next in that series, either eliminating or significantly changing the paths not taken at that inflection point.

We’ve been looking for one of those inflection points to happen at about this time, and in about this area, and that is likely to be resolved over the coming week, so in this Memorial Day post I’ll be looking at that and what the shorter and longer term implications of the direction taken from that on SPX.

Back at the end of December I wrote a post ‘Goodbye To 2018‘ that the key resistance level to hold on any rally would be the monthly middle band, and that a monthly close back above would likely deliver a new all time high in 2019. On 15th February, after the break back over the SPX monthly middle band at the end of January I wrote another post ‘It Sounds Wild But …..‘, where I was talking about the possibility that that all time high retest might make the second high of a large double top, and we have now obviously reached the stage where that pattern is visibly forming, though of course it doesn’t need to finish forming, or indeed play out to target if it breaks down.

That said, it is a very high quality potential pattern. The target area would be close to 1800, a double fib retracement area with the 50% retracement of the bull run from the 2009 low and the 61.8% retracement of the bull run from the 2011 in the same areas. Double top support at 2346.58 is also close to the rising support trendlines from the 2009 and 2011 lows. This is a very attractive setup,and it has potential to deliver that move in the right environment, which could be delivered if the trade war news, already heading south, continues to deteriorate. 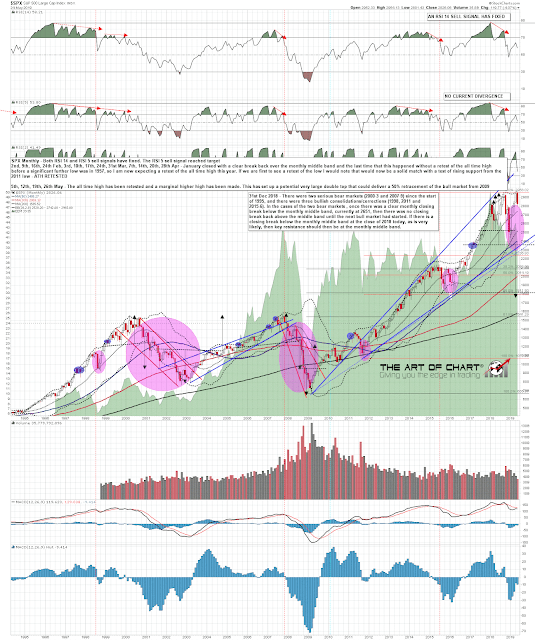 In the shorter term, looking at the retracement so far from the new all time highs in 2019, there is a 5dma Three Day Rule target at a full retest of the May low at 2801.43, not yet quite delivered on this last move down, though NDX and RUT have both already made lower lows. That Three Day Rule target is an exact target, though there are a couple of rare past exceptions when overall triangles have been forming, which doesn’t currently appear to be the case here. I am therefore expecting to see a full retest of 2801.43 on SPX sooner rather than later in the coming week.

As and when we see that full retest, that takes us fully into the next inflection point on SPX, with possible daily RSI 5 buy signals then forming on all of SPX, NDX and RUT, and indices in the clear low window with the centre of that window seen last Friday. 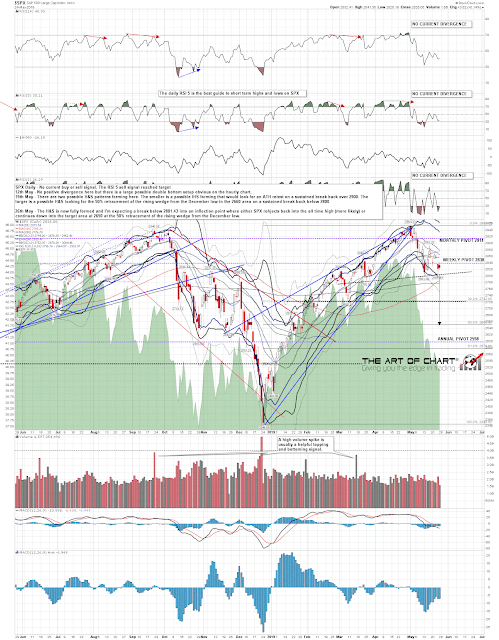 The short term setup here on SPX/ES is fully formed H&S patterns on SPX/ES with targets in the 2640/50 area. Again this is an attractive retracement target, at a 50% retracement of the move up from the December low. As a general rule we regard the inflection point options as a 70/30 probability split, so reaching that target here would be the 30% option. The more likely option on the timing cycles would be a rejection at the break below the H&S neckline, delivering ideally (for me) a retest of the all time high, in what might well be the second high of a smaller double top, or alternatively (for Stan) a consolidation below 2900 area resistance before the next leg down. If ES is going to reject back up, then that might well be after a touch of possible falling wedge support

On NDX the setup here is another H&S that has already broken down slightly, though it may be that the head has just been completed on an H&S with a flatter neckline. Either way, if the H&S delivers a sustained break down, the target would be in the 6650-6750 area, just over the 61.8% fib retracement of the move up from the December low. 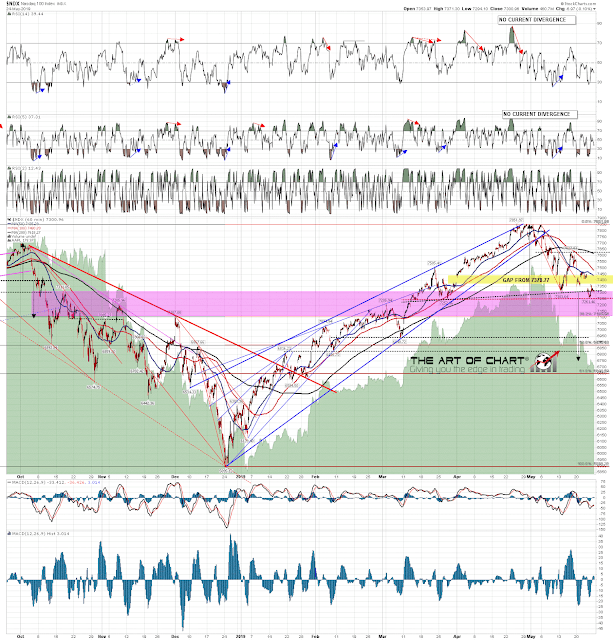 On RUT the setup here is a double top that has already broken down slightly before this latest bounce. On a sustained break down the target would be in the 1370-90 area, significantly more than 61.8% of the move up from the December low. 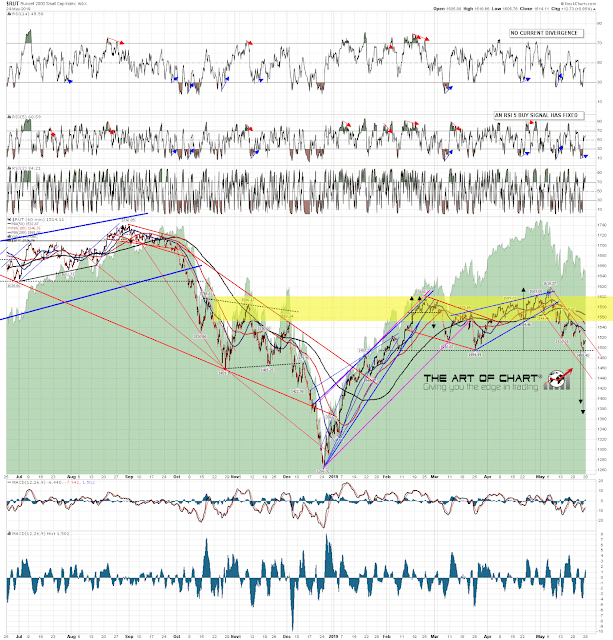 We are regarding the odds at this inflection point as 70% to find support after a modest lower low and rally there for several weeks, and 30% that we see a sustained break down towards these pattern targets on SPX, NDX and RUT. That said, bad news may push the market down and the trade war news so far has been impressively grim, with no sign of that being likely to change over the next few weeks, and with signs that the situation may deteriorate significantly further over that period. We shall see.

A couple of announcements today. An hour after the close on Wednesday Stan and I will be doing the third webinar in our Trading Commodities – Setups And Approaches’ series. If you’d like to attend you can register for that either here, or on our June Free Webinars page. We are also doing our free monthly Chart Chat on Sunday, as it is the first Sunday of the month, and if you’d like to see that you can either register for that on the same page, or directly here.

Stan and I have also launched a new metals and energies service looking at some important stocks in these areas. Those tickers are AG, GOLD, KL, MUX, SBGL, USO and UNG. If you’re interested in a free trial you can see more details here: This new service and our Big Five and Sectors service are both included in a 20% Memorial Day sale lasting until the end of this week, and, as with all our discounts, that discount lasts through the lifetime of the subscription, with no price rises ever applied while any subscription is continuous.

Everyone have a great holiday! The rest of the week should be interesting.