My last three posts have been a coronavirus series, so I’m going to be putting in the links here so as to refer back to them easily for now. These are the three posts so far.

I live in Chester in the UK, and the government here has been gearing up heavily for a coronavirus COVID-19 outbreak. There have been dedicated facilities set up to test and treat those affected for several weeks now, and the government has made it very clear that it will take strong measures to combat any COVID-19 outbreak here, up to and including shutting down travel and quarantining entire cities if necessary. As the evidence so far worldwide suggests that a strong response can contain an outbreak this is very reassuring.

I have a friend living in Bedford Texas, and last week he was at a local hospital asking about COVID-19 preparation. He was told that in the event that it became an issue at all, it would most likely be less of a problem than the usual flu fatalities in any normal year, and that really it was nothing to worry about. Since then the first serious outbreaks have been detected in California, New York and other areas and we’ll see whether this will prompt the serious response needed to contain COVID-19 in the US. In the meantime the US is still seriously behind the curve on this, and needs to catch up fast: 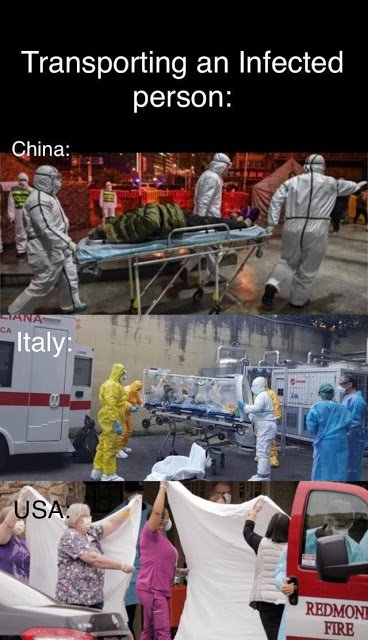 On the markets last night was strange to say the least. After US equity index futures hit 5% down from Friday’s close they effectively shut down until the RTH open, when they immediately fell to 7% down, closing again for 15 minutes and then dropped again to find a low slightly over 2700. Since then they have been rallying but will likely see lower soon.

Another strange thing today is that stockcharts.com has been down since the open, so I’ll be using the charts I did for subscribers yesterday, but those should be fine.

In my last post on 28th February I was talking about the big rally that we should see on SPX and noted the two obvious bounce levels for that rally at the possible H&S necklines at 2856 and 2822. The low was at 2855, a whisker under that first level and the 50% retracement rally that followed was a somewhat high but still perfectly acceptable H&S right shoulder. That H&S has broken down at the open today of course, with a target at a full retracement back to the Dec 2018 low at 2346.58. If seen that would be below the rising megaphone support from the 2011 low currently in the 2500 area, and would be a decent match with rising support from the 2009 low. I’ve marked up the H&S below. 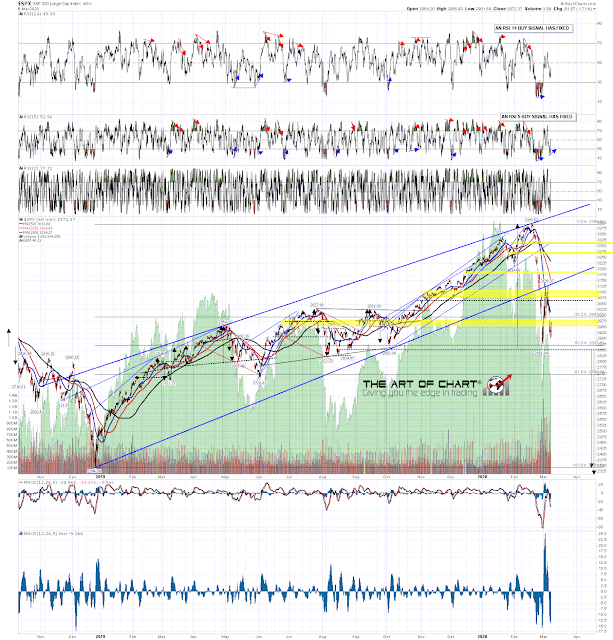 On the daily chart the daily sell signals have made target of course and, as and when stockcharts is back up, there may now be daily positive divergence, but I’d be pretty surprised to see a major reversal directly back up from here. 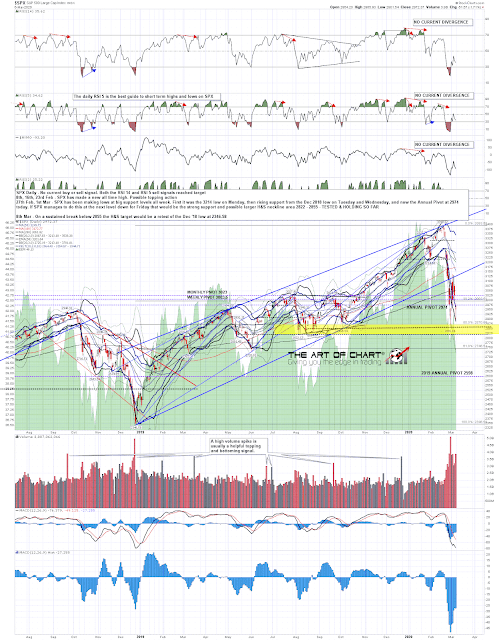 On the SPX weekly chart there is an open RSI 14 sell signal that will likely reach target this week. This is the best chart to see the rising megaphone support trendline from the 2011 low, and this is now very much the obvious next big target. 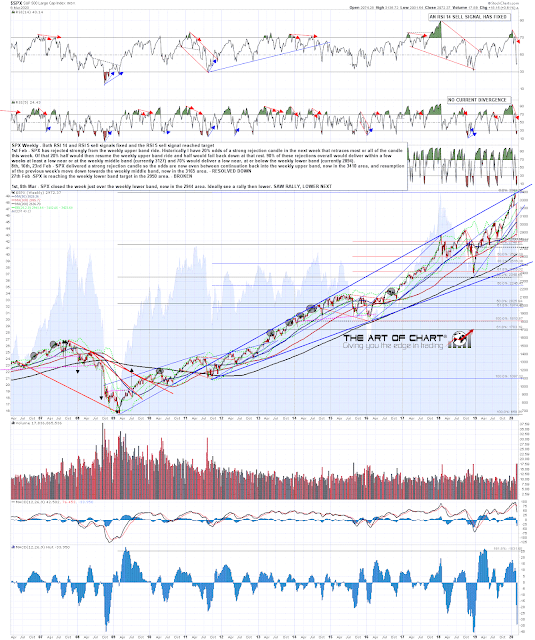 On the SPX monthly chart you can see the rising support trendline from the 2009 low, currently in the 2350 area as I mentioned, and a strong match with the H&S target at a retest of the 2018 low at 2346.58. If seen, this area is a strong candidate for a low, or at least a big rally. 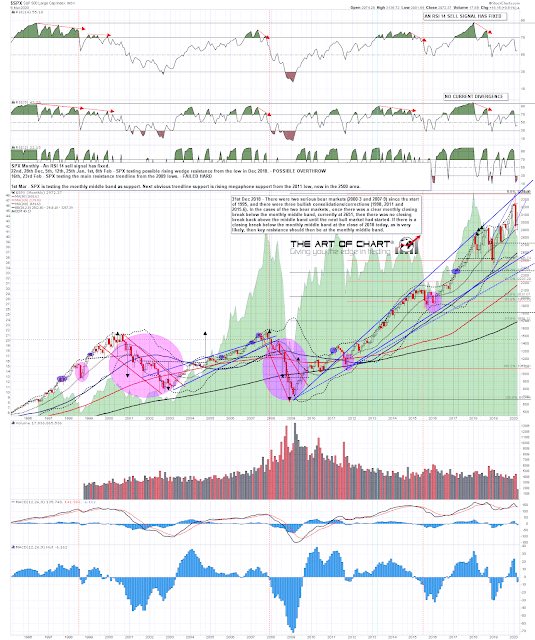 One question I was asked in my premarket video this morning was how much impact the Fed could expect to have in this news environment. Well they have already given us the rally high on SPX on the brief spike on the 0.5% rate cut last week. That didn’t last long and as I recall from 2008/9, he impact the Fed was having in a very strong news environment was at best delayed for any sustained reaction. I don’t think even a full percentage point cut at this stage would do more than rally the tape for a day or two, and perhaps not even that.

There is another issue here. In normal times the Fed would be cutting rates from a level that was a lot further from zero. Interest rates are already at historic lows and can’t be cut much without resorting to negative interest rates, which might or might not be effective in any case as they have never been tried on any real scale. In terms of QE, in effect QE4, at a level higher than any of the previous three QE interventions, has already been running for several months and is still ongoing. The fact that the Fed has been avoiding calling this QE4 doesn’t change the numbers, which are what they are. (Not) QE4 helped push markets into ever higher highs until recently, but hasn’t done anything so far to slow this decline. To the contrary, pushing so much air into the markets over recent months has likely accelerated this decline so far. The Fed may not have much to offer here and markets likely just need to find a new level the old fashioned way.

Has the bull market from the 2009 low finished? If we see a break below rising support from the 2009 low then maybe, but I as was saying on 24th Feb, this is all likely to deliver a major buying opportunity later this year from a level we are unlikely to be close to yet. Best case on COVID-19 is that this outbreak peaks in April and currently cases outside China are still doubling every three days, so the next few weeks should be pretty interesting.

In the short term I’m watching the 2855-60 level today as the backtest of the broken H&S neckline. If reached, SPX may well turn back down towards lower lows there.