I have a gap in my work schedule this morning as we wait for the Fed this afternoon, so I thought I’d do a quick update on the inflection point that SPX has reached today, and talk about why the still very pervasive faith in the power of the Fed to keep asset prices up should not just be dismissed as irrational.

For me I look at the Fed and I know that I don’t see what most others seem to see, as I see a track record of successively larger failures that have created a Fed seemingly capable of trying anything to try to keep asset prices high, for fear that a serious decline in asset prices might unleash an economic whirlwind that they could not hope to control. They have my sympathy but, based on their track record, not my respect, and here is my image choice for the Fed today. If you’re enjoying some of the great demotivational posters that I’ve been using in a lot of my recent posts, and on and off for much of the last decade, check out the author website at despair.com for some good laughs and amusing gift ideas. 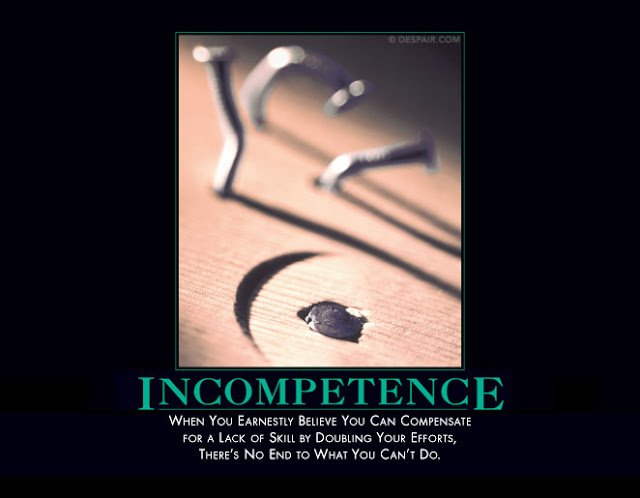 In a very real sense therefore, if anything that can be bought or sold is only ever worth what someone would pay for it, and the same applies to anything that they would be using for payment, then any market is a construct of faith, faith that the things bought and sold in the markets have value, and faith that those markets will continue to exist, so that they will continue to have value.

This is the reason that a loss of faith, or confidence, in markets can be so damaging, and why they can tumble so fast in the absence of buyers. Market panics can start recessions, damage economies, make rich people poor and change the fate of nations.

Can faith move mountains? Well a lot of faith can supply enough labor and bulldozers to at least try to move them, and it is well demonstrated that through the placebo effect faith can heal the human body without medicine that would have any scientifically demonstrable effect.

Faith however if fragile. If you don’t believe that a placebo medicine might heal you, it won’t work, and if people lose faith in the power of the Fed to maintain asset prices, in the absence of anything else to keep them up, then they will fall. So how effective is this faith in the Fed likely to be here?

Well there are obvious limits to the power of faith in markets. I wrote a post on 16th May 2014 called The Great Brain Robbery reflecting (in the second half of the post) on the seemingly universal belief held at the end of 2013 that as QE3 ended, bond prices would fall in response. I had argued the opposite at the time, based on the pattern setup and the bond price history from the ends of QE1 and QE2, but I’m not certain I convinced anyone at the time that bonds might go up. The point was though that they did go up from there in a big rally, and the near universal belief that the opposite would happen didn’t have any obvious impact at all.

Fast forward to the present and there is nothing like that general belief that equity markets will go up now. My post yesterday looking at the history of declines like we have seen so far this year over the 91 years of past price history on SPX tells us that there would usually be a backtest like the one we have seen into today, and then that the backtest would usually fail into lower lows. If that sample is restricted to the five examples I chose as directly comparable because they were the instances with serious economic shocks, then they all rallied back to this retracement level, and they all five then failed into lower lows. That’s only a statistical sample of five, but that’s a very strong indication of what would generally happen here.

It would be tempting here to compare the Fed to the story of King Canute trying and failing to command the tide, but that’s not a good comparison as the movement of the tides depend on gravity, something not subject to the influence of any man, and the movement of the markets depends on faith/confidence, which is. We will see how that goes today. On to the markets. 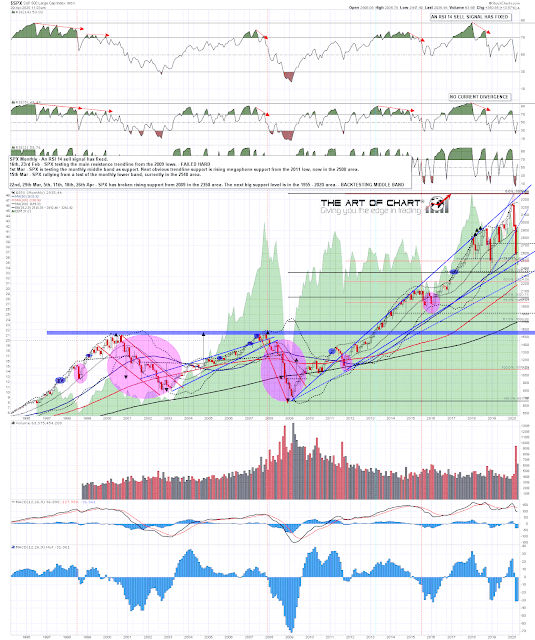 On the daily chart SPX has reached the 61.8% fib retracement of the decline and a strong daily RSI5/NYMO sell signal has fixed. 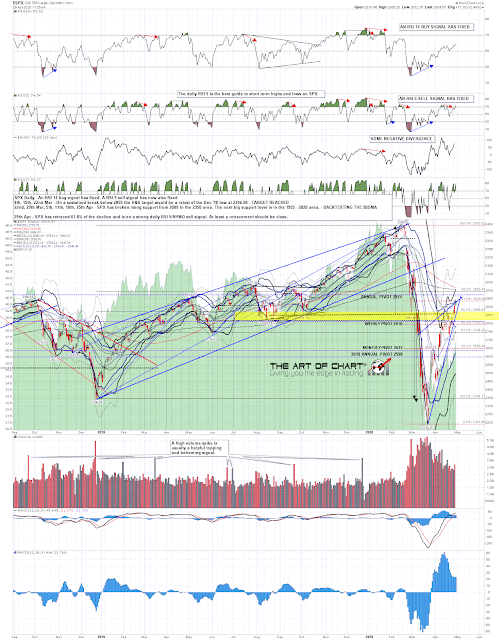 On the hourly chart an RSI 14 sell signal is now brewing. 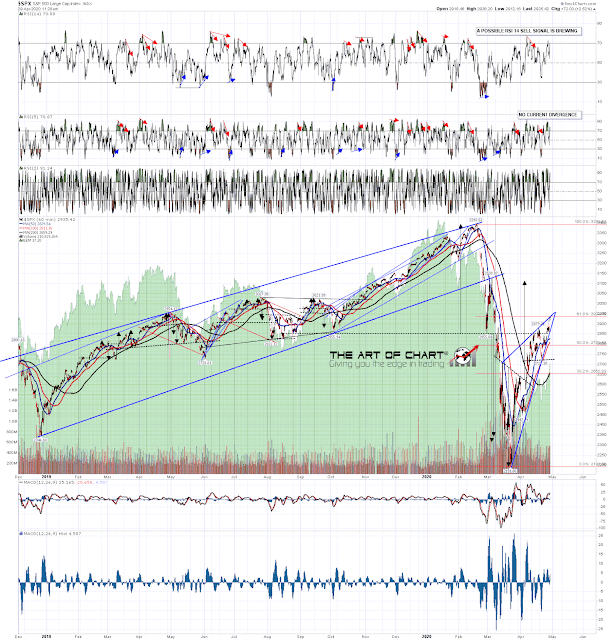 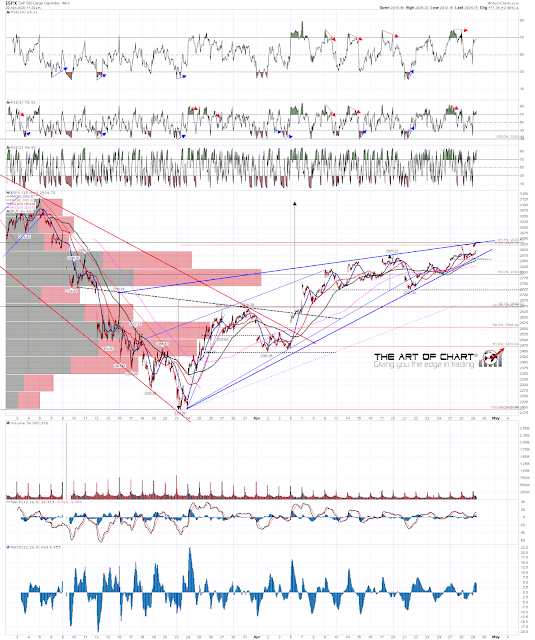 This is the obvious candidate high area for this rally, the pattern and RSI signal setup for this rally support reversal here, and SPX past history also supports reversal here, with almost 90% confidence that the ultimate next target for that reversal would be a full reversal of this rally at minimum. We are waiting to see what the Fed have to say today but the odds favor down.

Stan and I will be doing our free monthly Chart Chat at theartofchart.net this coming Sunday 3rd May reviewing progress on SPX and the usual wide range of indices, bonds, currencies metals, energies and other commodities. If you’d like to attend you can register for that on our May Free Webinars page here.