Skip to content
I’ve been hesitating about doing another post on COVID and the impact on the economy, and likely further impact on markets this year, because in the run up to the US presidential election almost any comment on these issues seems to be taken as pitching in for one side or the other in the election. I’m a Brit obviously so will not be voting in the election as there was some kind of disagreement a couple of centuries ago that lost the UK the right to intervene in US politics, but I’ve been a bit concerned about having a post about COVID being seen as a statement of support for one side or the other.
That’s not the case, and for me this contest is mainly remarkable for the ages of the candidates, at 77 for Joe Biden, turning 78 close to the election, compared to Donald Trump at an only relatively youthful 74, and for the mental state of the candidates, with Biden appearing to be in early stage dementia, and very possibly Trump suffering from this too, though his behaviour has really been so erratic in the past that’s harder to judge. Does the US really not have any presidential contenders young enough that senile dementia would not be a significant concern?
I’m planning a COVID post for later this week so I’ll see if I can get through the more controversial parts of that now. The first question to address is whether Trump’s administration has handled the COVID crisis well, and you would only need to look at my posts in late February and early March to realise that I thought then as now that the administration was very slow to become aware that there was an issue at all, and was then in strong denial about it until the crisis was well advanced. Management of the crisis since then has been frankly hit and miss.
Does that mean though, as I have seen alleged, that the administration is therefore responsible for the 125k+  COVID deaths in the US so far? Not at all. That would assume that an early response could have avoided this pandemic, which is absurd. The only country that might have prevented this becoming a world pandemic was obviously China, and the only other player on the world stage that might have raised the alarm to co-ordinate an early international response to try to stop the pandemic was the WHO. Neither China nor the WHO took any meaningful action to prevent this pandemic at a time when it might have been nipped in the bud, and one of the most interesting questions over the next couple of years will be the investigation of why and how China and WHO failed to do that. It was never in the power of the US administration to prevent this.
There also seems to be an underlying assumption that there will be a COVID-19 vaccine developed in a timeframe that might be useful. That seems doubtful, though some progress is being made on treatments that may save lives. The administration wasn’t on the ball here, but it seems doubtful that an earlier response would have made much difference. If however US politicians could stop trying to blame each other for a crisis that none of them realistically could have prevented, and unite now to to coordinate a bipartisan way forward from here for the ongoing economic crisis created by this pandemic, that might potentially make a big difference, so it is dispiriting to see how little effort there has been from US politicians to come together in this time of crisis. Rarely can the US voters have been less well served by the politicians supposed to be representing them.
On to the markets.
On SPX the break below the daily middle band last week was confirmed, and that is now the key resistance area, now in the 3108 area, so in the 3096-8 ES area. That was tested in the last hour today and a break above would open a possible retest of the June high, though that might be overambitious. 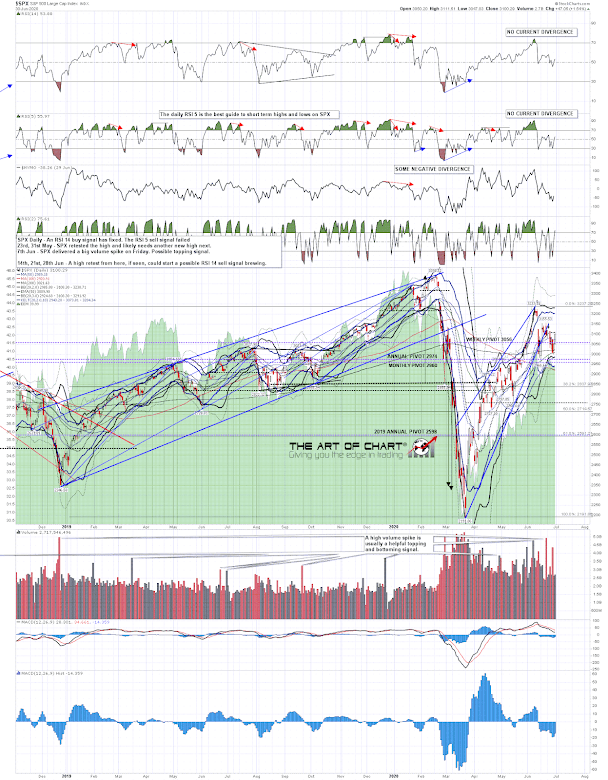 SPX tested the 50 hour MA in the 3080 area as resistance for most of the day, but that broke in the last hour today. That will be potential support to watch tomorrow (Wednesday).
SPX 60min chart: 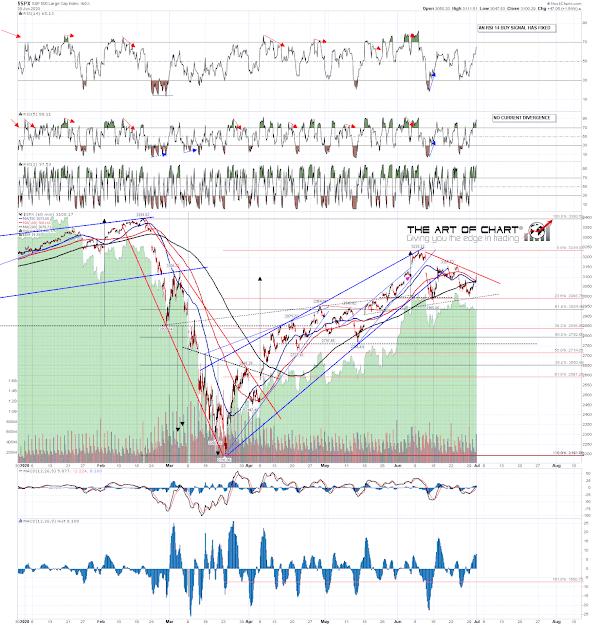 The main index I’m watching here however is NDX, as it is that index that has the rising megaphone that seems to be defining market action at the moment. That appears to be topping out here, megaphone resistance is holding and a weekly RSI 5 sell signal has now fixed.
NDX weekly chart: 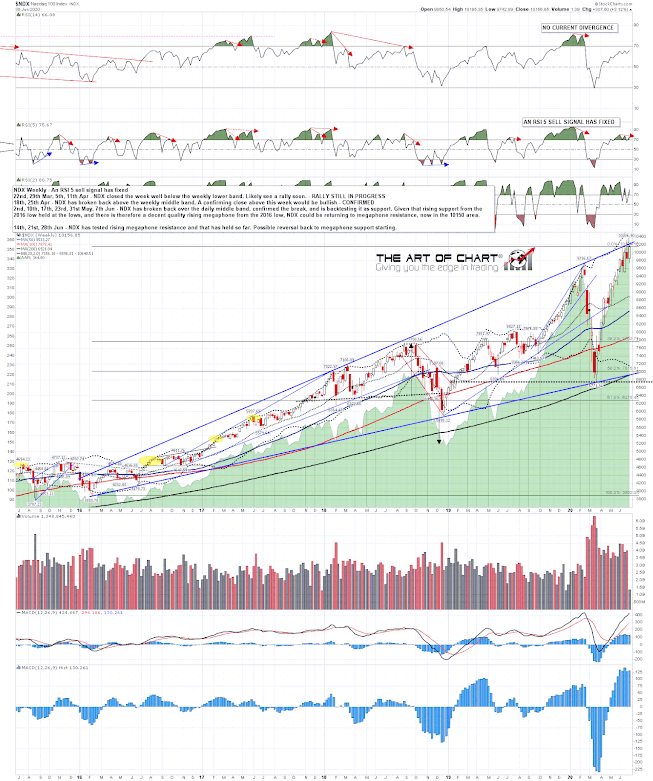 Now the question is what can we expect over the next couple of days, and helpfully both of the first two days of July this year have strong historical stats.
Wednesday July 1st has 85% historical green closes on SPX, a bit lower at 76% on NDX. That’s a very high number and what we might see, having tested and closed slightly below the daily middle band on SPX today, is a break up over the daily middle band. If seen that would probably deliver a retest of the all time high on NDX.
What about Thursday 2nd July? Well given that the following day is a holiday I was expecting to see a bullish lean but that’s not the case, with the historical stats on Thursday at 66.7% red closes on SPX, and slightly higher at 71.6% on NDX. If we see a green day on Wednesday that breaks back up over the daily middle band on SPX, then on Thursday we might well see a rejection back below to close the week.
So much for the theory, what evidence is there to suggest that might happen?
Well it would be a very tidy fit with the rising wedges on the AAPL and AMZN hourly charts below, both of which look as though they are in a topping process, and in both cases looking as though a high retest and fail there would finish off the topping sequence nicely. We’ll see if that delivers.
AAPL 60min chart: 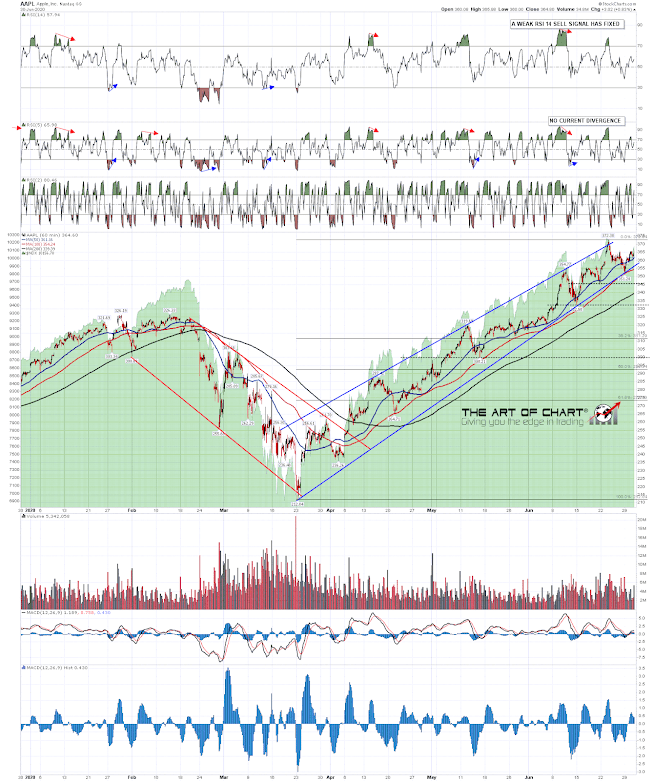 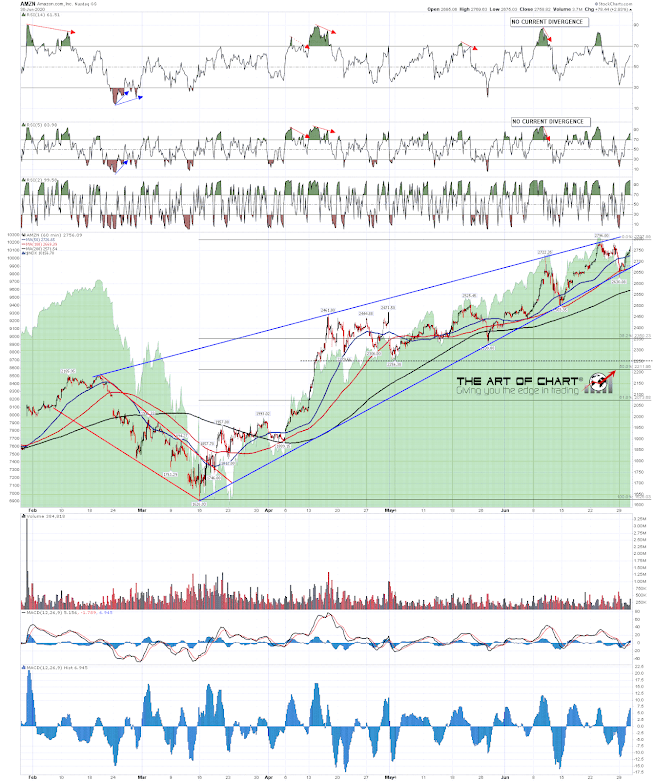 A couple of announcements to finish today. A reminder first that we are running our July 4th sale at theartofchart.net at the moment and that will be running until the close on Sunday 5th July. For the duration of the sale annual memberships are available for the price of only eight months at the monthly rate rather than the usual ten and as ever with all our memberships, the membership rate will remain the same with no price rises for as long as the subscription is maintained. If you are interested then you can find the sale page here.
The second announcement is that Stan and I are doing our monthly free public Chart Chat at theartofchart.net on Sunday 5th July. If you’d like to attend you can register for that here.