ES bounced at monthly pivot support yesterday and a likely bear flag is forming that on a break down should at minimum deliver a retest of yesterday’s low, and likely continuation lower after that. There is a small section looking at Facebook at the end of the video today. Intraday Video from theartofchart.net – Update on ES, NQ, and TF:

FOMC is tomorrow, of course, and it is possible that the Fed might say something to cheer the bulls here, though it’s a little hard to see what that might be. They obviously wouldn’t mention QT1, the first phase of quantitative tightening designed to reverse the QE1 through QE3 easing periods. So far, that has been implemented with a great deal less fanfare than any of the QE periods, so as not to spook the markets. Equally, the economic numbers over the last month are not supporting any slowing up on interest rate tightening, though in this case, I think the Fed is in any case merely playing catch up so as not to fall so far behind the markets that really set interest rates, that it becomes obvious that the Fed does not really control interest rates.

For what it’s worth, the beautiful little triangle on the TNX (10yr treasury yield) hourly chart is leaning strongly towards a fastish retest of the recent highs on bond yields, with more downward pressure on bonds, so I’d be very surprised to see an immediate reversal there. TNX 60min chart: 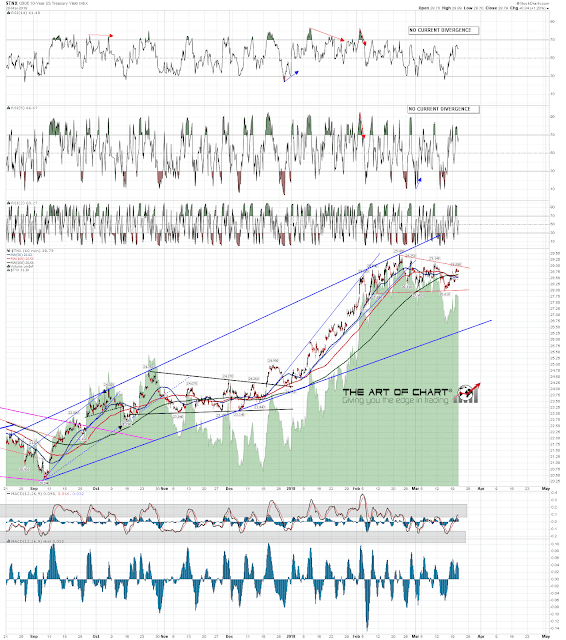