My last few posts have been a coronavirus COVID-19 series, so I’m putting in the links here so as to refer back to them easily for now. These are the eleven posts so far. I’m planning to finish this series with a post on the likely economic impact of COVID-19 over the coming year, and a look at the interesting search for scapegoats that is now getting started, with the obvious targets being the very strange behaviour of both China and the WHO as this crisis was developing. That should conclude this series in the next week or two, though economies and markets will likely take quite a while longer to get back to anything that we might recognise as normal.

This has been a bit of strange week, but prices often hold up into OPEX and they’ve done that this week, even if the news last night that spiked the market up into new rally highs was not really much news at all. I’ll have a quick look at that in two parts.

The Gilead news – This was old news. Gilead do have a promising drug, and that may well help a lot with more severe COVID-19 cases, and that may be achievable in months rather than years, but we knew all that three weeks ago. The Plasma treatment wasn’t mentioned in the ‘news’ last night but also may help a lot, as that leads us into the other news.

President Trump also announced plans last night to start reopening parts of the economy within a few weeks, and that the virus peak is likely behind us. No disagreement there and actually I think he is absolutely right to be looking at reopening the economy. I’ve mentioned the potentially catastrophic economic damage that could result from an extended shutdown, and that damage is potentially so bad that accepting a large amount of extra deaths might well be an acceptable cost to avoid something even worse. The second point I’d make is that while I agree that the initial virus peak is likely in the rearview mirror for now, that these superflu pandemics tend to come in waves, and this was just the first wave. We must all hope that there is some major advance on treatment the seriously ill before we see wave two within a few months.

Bottom line here is the crisis is not over by any means at all. The worst in terms of deaths and economic damage could be behind us, but that depends on getting a lot of good news over the next few weeks, and we may or may not see that. Lastly the economic damage done so far is severe, and the consequences will be with us for some time to come, even if the news from here is so good that the rest of the pandemic just melts away like dew on a summer morning. Business as usual is absolutely not just around the next corner. Does that mean that the crash lows have to be retested? No, but at the least much of this rally will likely need to be retraced soon.

If you’re enjoying some of the great demotivational posters that I’ve been using in a lot of my recent posts, and on and off for much of the last decade, check out the author website at despair.com for some good laughs and amusing gift ideas. On to the markets: 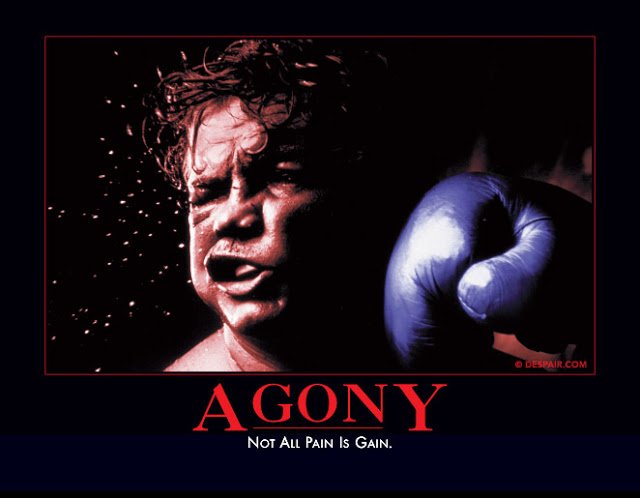 I was saying on Monday that I wasn’t particularly happy with the quality of the bear flag patterns from the low in terms of that area being a final rally high area, and the good news (for bears) is that position has improved considerably over the course of this week. Right now is very much a candidate rally high area and the rally high may now be in, barring a possible high retest as part of topping process. So how has this setup improved?

Yesterday morning in my premarket video for subscribers at theartofchart.net I was talking about the decent looking setup from there, close to the current retracement lows, into a retest of the rally highs. There were 60min buy signals fixed on ES, RTY, DAX & ESTX50, all of which have now made target, but the main thing I was looking at was the high quality rising wedge setup on the NQ chart. What drew my eye particularly there was NQ’s retracement to, and perfect reversal at, the rising wedge support from the early April low. I said that unless that wedge support broke then the obvious next target within the wedge would be wedge resistance, which then was hit and slightly overthrown at the highs last night. At that point of course the next obvious move would be a reversal back to wedge support, hit this morning, which you would expect to break after the bearish overthrow, and that has broken down slightly this morning. The next obvious move in the sequence is to form a reversal pattern, which can include a high retest, and then down.

On the NDX chart the high this morning confirmed a now decent quality overall bear flag wedge resistance trendline and this is now a high quality setup, with hourly RSI 14 and daily RSI sell signals now brewing on the NDX on the higher timeframes. 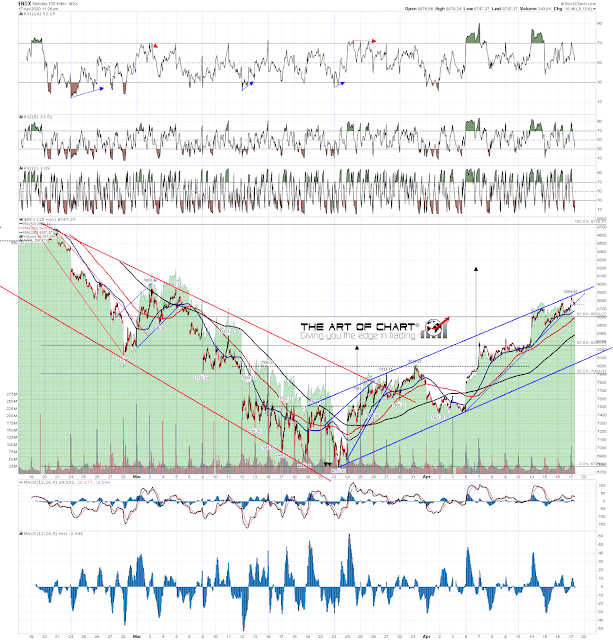 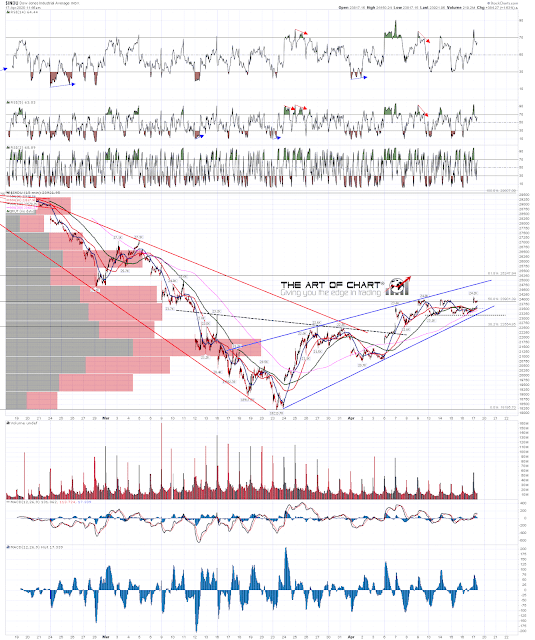 On SPX the bear flag wedge setup is still only ok, but the high retest this morning has set up a decent little double top, an hourly RSI 14 sell signal has fixed and again, a daily RSI 5 sell signal is now also brewing. SPX 15min chart: 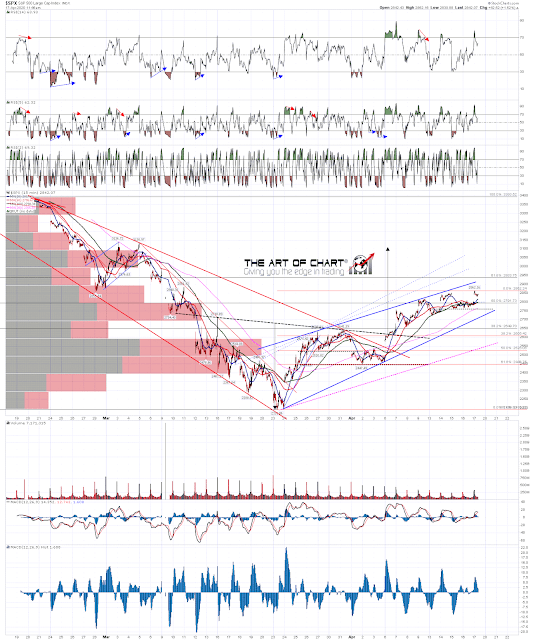 Overall this is now a much improved setup for a rally high and we may well see that here. Pattern setups have improved and there is now hourly and daily negative divergence across the board. Do the globex highs need to be retested? Well I’d like it if they were retested, but though I’ve heard many say over the years that they are always retested, I have seen for myself that that isn’t the case, and a classic example of that was the ‘Trump Dump’, when ES dropped 5% on the news that Donald Trump had been elected President in Nov 2016. That spike low at 2027 has still not yet been retested, though that may change this year of course. Smaller examples of this happen a lot, though certainly globex highs and lows are retested shortly afterwards more often than not. With last night’s Gilead news being effectively old and rather less cheery news, that high might hold for now.

This is now a high quality rally high setup that may well deliver. We will see. There’s nothing in the news to suggest a moonshot on equities is likely here and, really there’s nothing to be bullish about apart from the vast quantities of money being printed and injected by the Fed to prop up asset prices. That didn’t have much obvious impact before the lows in 2009, so there’s not much reason to think it will have more impact here.

We did the introduction sessions for one of our regular Traders Boot Camp courses this week. This is a one month trading course taught by Stan and I teaching technical analysis and trading skills. This is mainly aimed at existing subscribers to help them use the forecasts we supply them with profitably, but is also open to non-subscribers. As far as I am aware this is cheaper than any equivalent courses available and, I suspect, much more comprehensive and better value. These were the risk management webinars this week and these were recorded as all the webinars are. Next week we are doing three webinars on technical analysis with Stan and I teaching charting and analysis techniques and it is not too late to join yet, so if you are at a loose end during this quarantine and would like to improve your trading and charting skills then you can check that out on the course page here.After next week we are doing a week each on swing trading and then day trading, for which we also have a lot of very interesting and useful custom tools.