My last few posts have been a coronavirus COVID-19 series, so I’m putting in the links here so as to refer back to them easily for now. These are the nine posts so far.

Almost every spring I see a little drama play out in the flowers near the front of my house. In March sometime for a couple of days, or a week, there is the first serious breath of spring, and the weather is nice enough to lure out humans and the first spring  daffodils. Shortly after this there is a cold snap with frosts and all those early daffodils die, illustrating an important lesson about why being early is not always a good thing. The early bird may get the worm, but obviously that early worm has little to celebrate in this scenario. For the obvious reasons it is also generally the second mouse that gets the cheese.

Why do I mention this? Well that would be because the equities rally is getting another leg higher, and I have seen quite a number of market pundits confidently announcing that the 2020 low is in, and I frankly doubt that. The first leg down is finished for sure, but there is not much to say that lower lows are not coming, and every reason to think that they are.

In terms of why that is I was explaining in my last post the reasons why I thought then and now that any comparison between now and 1987 is weak as the circumstances are very different. The other thing is that, in terms of where economies are now, the bad news is likely to only just be getting started. Markets have shrugged off some seriously bad news in the last week, but that is likely to just be the tip of an impressively large iceberg of grim news, with the US, the engine of the world economy, going into this crisis less prepared and ready than almost any other developed world economy, and likely to suffer worse than most.

Just for an aside on that subject, I’ve created an interesting graphic below showing some of the inventive ways that americans have been responding to the shortage of masks when they need to go out at the moment. My personal favorite is the comedy traditionalist paper bag but other images show masks made from empty water tubs, a sneaker, half of a brassiere, a (clean) diaper, a washing up sponge/scour, a takeaway food cone and a plastic bag. Americans remain inventive, which is just as well, given the initial fail on the part of the US government to respond to this threat in a timely fashion.

What is the bad news that hasn’t really hit yet? Well the world economy is essentially paused right now and that’s not going to be ending soon. The world is likely in deep recession right now, though we need to see two quarters of data to confirm that. In the US and elsewhere a lot of otherwise viable businesses will likely go out of business permanently, exacerbating the employment data that even without that will likely get a lot worse from here, a lot of otherwise solvent people may be ending up on the street, and a lot of people are likely to die. In these terms this crisis is still getting started, and stock markets are likely to be weak as a result for months or even years to come as a result. It is way too early to be thinking that equity bulls are back in the saddle.

On to the markets.

On the daily chart the initial resistance on this rally was the daily middle band, until SPX gapped hard over it on Monday morning. That is now key support, currently at 2517, with the monthly pivot at 2637 as initial support, with the overnight retracements on ES,YM, DAX & ESTX50 all backtesting and holding their monthly pivots on Monday and Tuesday nights. The obvious next target is the 50% retracement of the rally in the 2790 area: 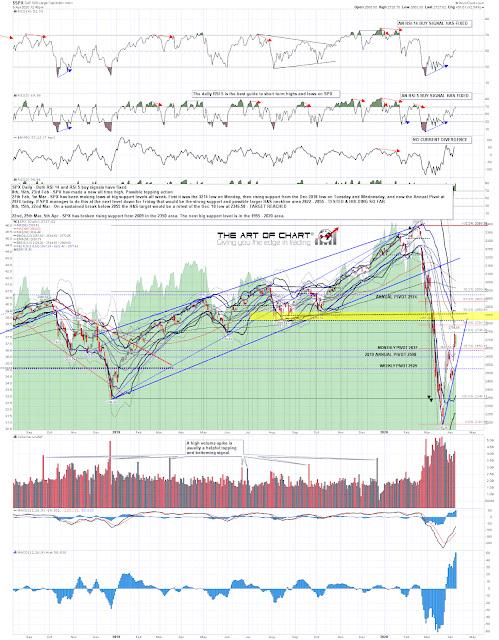 On the hourly chart the RSI 14 buy signal reached target and that means that SPX would likely need at least one more high to set up negative divergence before this rally is concluded. In the absence of evidence to the contrary I’m assuming that SPX will make that higher high, with an ideal target in that 50% retracement area. 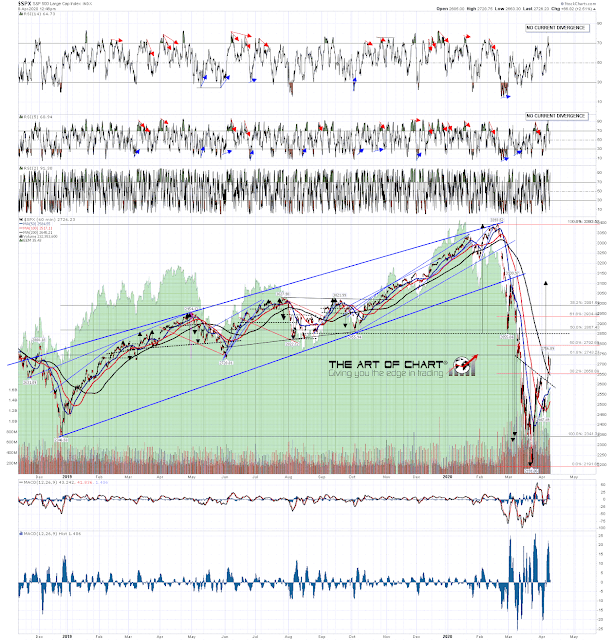 The shorter term chart is interesting here, as there is a valid IHS setup on SPX that broke up yesterday with a target in the 3110 area. I’d be very surprised to see that target reached, but this does set up up something that I would call a Janus Flag, and that is when a reversal pattern forms and breaks up (or down) and then rejects into the previous low (or high). If that is what we are looking at here then a rejection lower should deliver new lows for 2020, which is what I think should reasonably be expected as and when. That rejection may not happen until after the Easter weekend though, as holiday tapes do tend to favor the bulls. 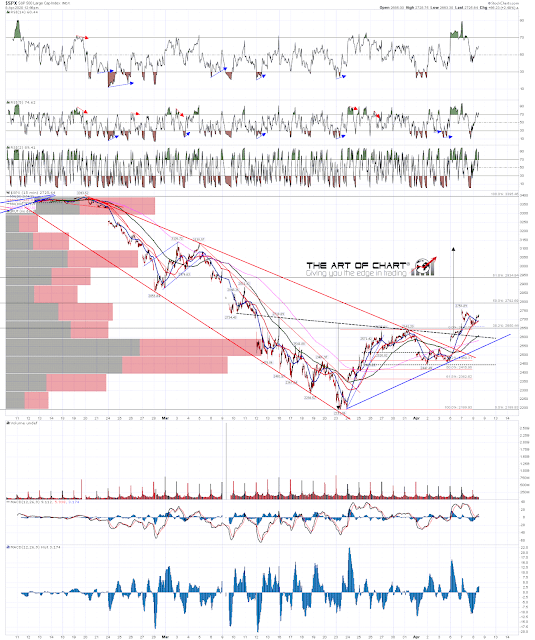 We held our monthly free public chart chat on Sunday and if you missed that you can see the recording on our April Free Webinars page. Among many other things we were talking in that webinar about the possibility that this rally would extend higher into the target area near the 50% retracement target on SPX. We are also starting one of our regular Traders Boot Camp courses on Monday. This is a one month trading course taught by Stan and I teaching technical analysis and trading skills. This is mainly aimed at existing subscribers to help them use the forecasts we supply them with profitably but is also open to non-subscribers. As far as I am aware this is cheaper than any equivalent courses available and, I suspect, much more comprehensive and better value. If you are at a loose end during this quarantine and would like to improve your trading skills then you can check that out on the course page here.

I’m planning a weekend post looking back at the growth of this COVID-19 crisis, the lessons learned, and what’s likely to be next, including the investigation into who, if anyone, is to blame for this crisis developing from a local chinese epidemic into a full blown worldwide pandemic. President Trump made a start on that yesterday raising serious questions about the words and actions of China and the WHO in January and February, which looked strange at the time, and look even stranger in retrospect. The answers should come over the next few months and should be interesting. Everyone have a great holiday 🙂