My last few posts have been a coronavirus COVID-19 series, so I’m putting in the links here so as to refer back to them easily for now. These are the twelve posts so far. I’m planning to finish this series with a post on the likely economic impact of COVID-19 over the coming year, and a look at the interesting search for scapegoats that is now getting started, with the obvious targets being the very strange behaviour of both China and the WHO as this crisis was developing. That should conclude this series in the next week or two, though economies and markets will likely take quite a while longer to get back to anything that we might recognise as normal.

I mentioned in my post on Tuesday 14th April that there was a gathering crisis on oil due to the supply and demand imbalance there, and suggested that not being long oil might be a good idea for the time being. What was that gathering crisis that I was warning about? Well really it’s straight out of Economics 101. This coronavirus crisis has cut the world demand for oil by about 35 million barrels per day with demand for fuel for cars and aircraft in particular shrinking almost to zero during this quarantine. This crisis also started just after a price war on oil started, with oil supply driven deliberately higher in an effort to drive some higher cost oil producers out of the market (particularly US shale oil producers I think), which was obviously poor timing.

Since the quarantine started there has been some action to reduce oil supply with OPEC leaders agreeing to reduce supply by ten million barrels per day a couple of weeks ago, but that still leaves a large excess of oil being produced every day relative to weakened demand, and that oil has needed to go somewhere. There is a lot of available storage capacity and that has been filling up over this period so far, and is close to being full. That causes an obvious problem where oil production is at some 20 million plus barrels per day more than current demand can absorb. So what does Economics 101 tell us to expect to see to correct this imbalance, which cannot continue long?

Well at this point you would expect price to fall to establish the market clearing price, and the market clearing price of course is where price falls to a level at which demand has risen in response to the price decline (looking hard at the moment, though I might fill up my car a bit sooner than otherwise), and enough supply comes out of the market with production shutting down at higher cost producers to the level where supply matches demand. I’ve been warning subscribers (at theartofchart.net) and others in webinars for a couple of weeks that this was likely coming and might be a violent process, and my expectations were met and exceeded by the violent moves that we have watched on oil this week.

So what did happen on oil futures on Monday? Many news providers were reporting that oil producers were paying buyers to take their oil, and that oil prices had dropped below zero. Was that true? No and no, though that may have appeared to be the case to the uninformed eye. What actually happened was this.

The trading instrument that everyone was watching on Monday was the CL May futures contract, which was expiring yesterday on Tuesday April 21st and committed whoever held that contract at expiry to take delivery of this oil within a short period after that contract expires, usually within a few days. That oil would not actually be delivered in barrels but would come from a pipeline, or sea or road tanker. The term barrel here is just a unit of measurement, but in terms of a future, it is not that final holder of the contract that pays the producer for that oil. That oil was paid for when that futures contract was created, and at that point, perhaps in January 2020 or earlier, the producer was paid for the oil, at the market price at that time, and the futures contract committed them to deliver that oil shortly after the contract expired yesterday. That futures contract was then sold into the futures market and may have changed hand numerous times since, bought and sold by oil users, institutions and speculators of various types with a lot of those contracts being held by ETFs aiming to mirror changes in the price of oil for their investors in various stock markets, or oil processors such as refineries who would take the oil to process that into secondary products such as gasoline, or owners of oil storage facilities wanting to increase their oil stocks. The holders of those futures on Monday, unless they were producers buying back contracts to cancel their agreed deliveries, and turning a handsome profit on the original sale prices in the process, were all therefore oil processors, storage facilities, institutions and speculators. What happened to these contract holders on Monday?

Well as I mentioned, oil storage capacity is almost full, so not much will have been wanted for this. Oil processors have demand issues, so are operating at relatively low levels. After the contract expiry on Tuesday there would be a lot of oil that would have to be delivered somewhere, and the owners of those contracts at expiry would have committed to take those deliveries. Of course financial institutions and oil investors/speculators do not tend to have any storage facilities, so all of these would have to be out of this contract before expiry. Demand is weak among those who would normally be buying these from them and so, Economics 101 again, on Monday afternoon the market had to find a market clearing price at which those who could take delivery of that oil would buy those futures from those who could not take delivery of that oil, and at the market close on Monday, that market clearing price closed at an eye-watering minus $37.66 per barrel of oil.

So who got caught on the wrong side of this price discovery massacre? Not the oil producers, who if they had forward sold that oil to create the CL May futures contract in (say) early January would have received a healthy $65 per barrel or so at the time. The main victims were oil ETFs, who tend to hold a proportion of their oil futures contracts in the front month until very shortly before expiry, with USO declaring an event loss of $80 million from this on Tuesday. Also caught were individual or corporate speculators. Some of those losses will have wiped out accounts and may not be recoverable from the account holders and so Interactive Brokers, one of the most solid and reputable of the brokers, have already made provision for a possible $80m of losses due to this since then. Many other brokers have not yet been so forthcoming, and I understand that there are $500m or more in brokerage losses that have yet to be admitted to. Hopefully these aren’t on a scale that will wipe any of them out.

So what’s the takeaway here? Well it’s worth remembering basic economic rules, even when watching the Fed at work might leave the impression that these don’t matter any longer, and with the excitement having now spilled over into the CL June contract, which fell from over $20 on Monday night to a low in the $6.50 area yesterday afternoon, there is also the prospect that, once supply has actually fallen to meet demand, that we might see a historic low on oil. As it happens the low yesterday on the main oil index $WTIC established a very nice looking possible support trendline on a falling megaphone from the 2018 highs and given that the price of actual oil is unlikely to fall below zero, that might well mean that oil is now in a bottoming process. 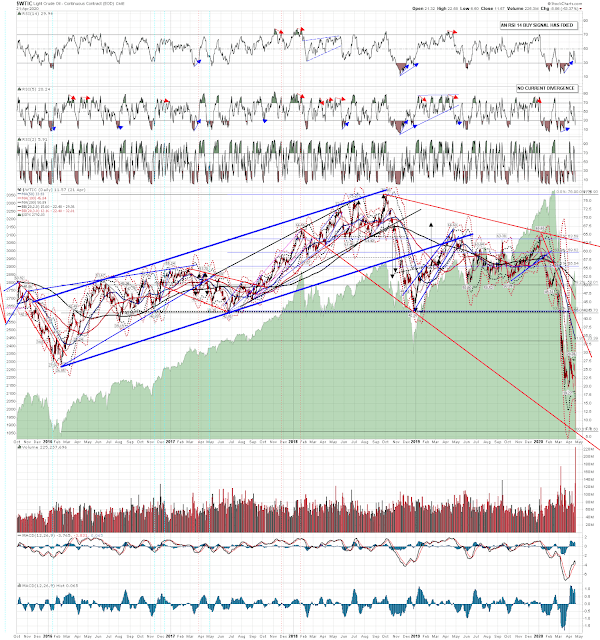 Is it likely that a trendline can really mean that much? Well the chart below is my WTIC monthly chart from 14th Feb 2016 calling a possible low then at a huge falling wedge support trendline and that held until this year. In fact the move we are seeing now may well be a bullish underthrow of that wedge support after WTIC rallied to hit wedge resistance in 2018. Any remaining doubters might want to check out my post here from 25th June 2010 calling for a low on BP at a similar trendline, and note that BP, expected by many to go to zero in the turmoil of the Deepwater Horizon oil spill, both then made the low at that trendline the next day, and, as I further suggested in the notes on that first chart, closed June back over $28. This kind of thing happens a lot. 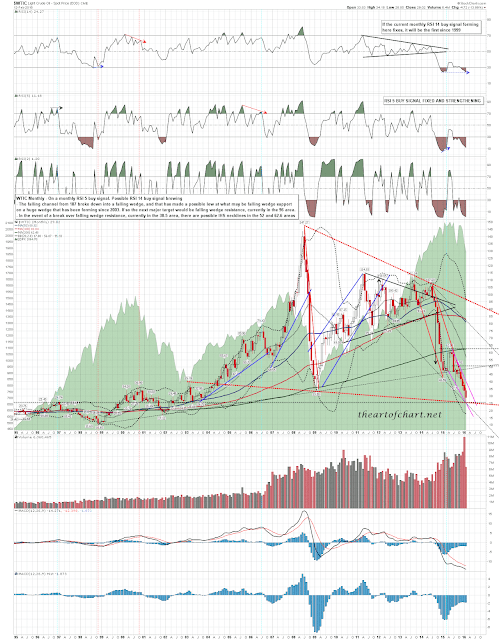 Here is my image choice for this very foreseeable oil price crunch, though I do really feel for any individual investors who saw oil hit zero on Monday afternoon and went long in the expectation that it had to go up from there. That’s hard, but the markets can be very harsh towards the unwary. If you’re enjoying some of the great demotivational posters that I’ve been using in a lot of my recent posts, and on and off for much of the last decade, check out the author website at despair.com for some good laughs and amusing gift ideas. On to the equity markets: 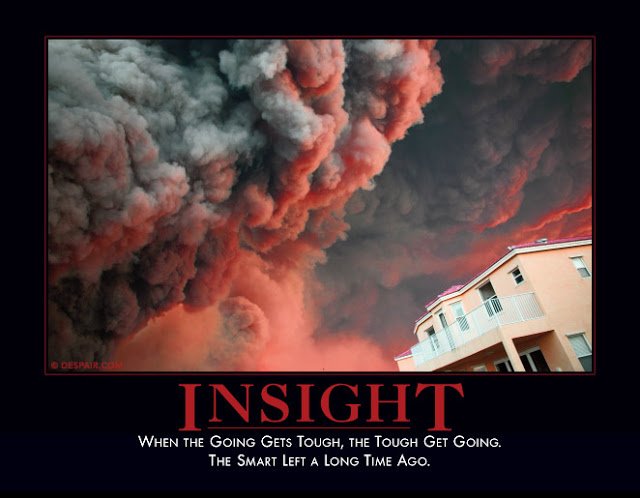 In my last post I was looking at the overall bear flag setup for this rally, and saying it was looking pretty good. With nothing obvious holding markets from new crisis lows apart from faith in the unlimited (printing) power of the Fed I was looking for a likely turn and so far, that is what we have seen this week. The possible daily RSI 5 sell signals that I mentioned were brewing on SPX, ES, NDX and Dow have now all fixed and I’m expecting these to make target, so I’m expecting equity indices to be heading lower soon. 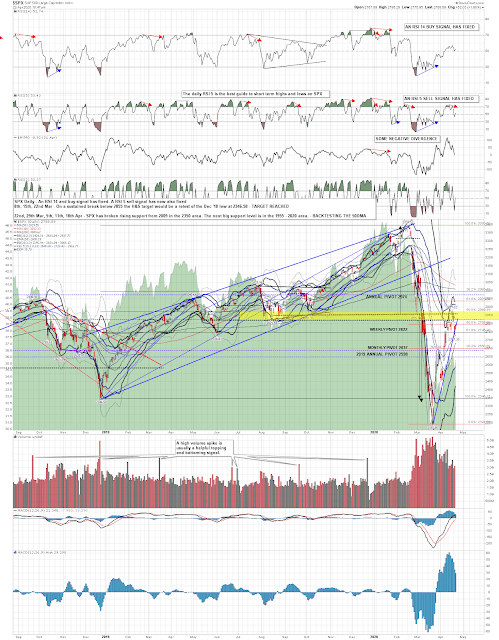 Before the open yesterday morning I was talking about the possibility that ES might make a low yesterday at a possible H&S neckline and then rally to make the ideal high on an H&S right shoulder that would have an ideal high in the weekly pivot area at 2822. It doesn’t need to get that high but that would be a very obvious target.

That H&S scenario is fully mirrored on SPX and if that forms and delivers the H&S target that would be close to a 50% retracement of this rally, which would be an obvious inflection point area to reverse there or continue lower. 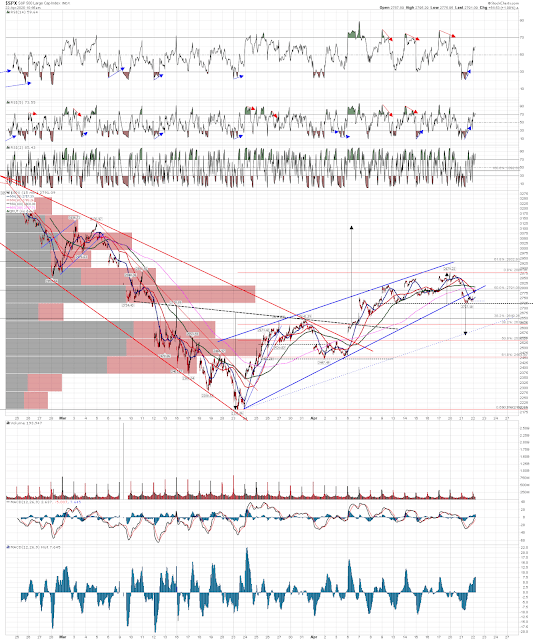 We’ll see how this goes, and on a break and conversion of 2822 ES to support we could still see a high retest to make a likely second high of a double top, but so far at least this H&S scenario is developing perfectly, and my working assumption is that continues to be the case. If so, SPX would ideally go a little higher into weekly pivot, but in practical terms having just tested 2808 SPX at the time of writing, could turn to start the next leg down at any time.

Stan and I are doing our monthly free public Big 5 and Sectors webinar tomorrow (Thursday) after the close looking at AAPL, AMZN, FB, GOOG, NFLX, TSLA, IBB, IYR, XLE, XLF, XLK and XRT. If you’d like to attend then you can register for that on our April Free Webinars page.